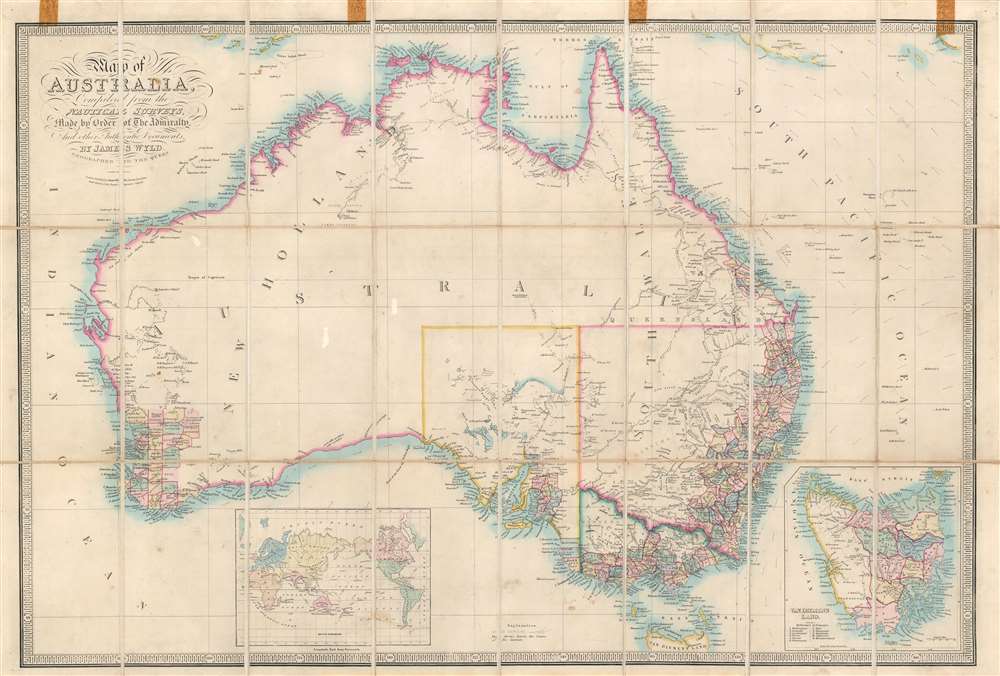 One of an incredibly important series of maps of Australia detailing its colonization.
$1,200.00

This is a c. 1858 James Wyld map of Australia during the Australian Gold Rush. Depicting the entire continent as well as Tasmania, Wyld illustrates Australia as is being transformed by aggressive colonization and mineral exploitation. Counties are most prevalent in New South Wales and Victoria, while a handful had been established in South Australia, Queensland, and modern-day Western Australia. Cities and towns in these counties are labeled, including Sydney, Brisbane, Melbourne, and Perth. Gold veins are indicated by very thin lines, many of which resemble small rivers. Very little inland detail is present, although some lakes and rivers are noted.

Gold was known to be present in Australia prior to 1851, but the intentional suppression of this information by the colonial government of New South Wales prevented all-out gold rushes. When gold was discovered at Sutter's Mill, California, in 1848, causing the California Gold Rush, countless Australians migrated in search of their fortunes. Desirous of maintaining their dwindling work force, the colonial governors rethought their position, and sought approval from the Colonial Office in England to allow the exploitation of the mineral resources and also offered rewards for the finding of payable gold. This led to the first major Australian gold rush when prospector Edward Hargraves discovered gold at Ophir, near Orange. A series of subsequent discoveries followed, transforming the Australian economy and leading to a rush of new immigration. In Victoria, for example, Melbourne, which had a population of around 29,000 in 1851, grew to over 500,000 by 1861 and then to 700,000 by 1869. This population boom forced the British government to allow the Port Philip District to secede from New South Wales and form the Colony of Victoria. Gold production in Victoria exceeded all other gold producing regions in the world, excepting California, with its highest annual yield reaching 3,053,744 troy ounces in 1856. It is estimated that between 1851 and 1896 a total of 61,034,682 ounces of gold were extracted from mines in Victoria.

Wyld's Map of Australia is an incredibly underappreciated piece of history. Wyld published meticulously updated editions from 1833 until at least 1869, with his son publishing subsequent editions until the 1890s. This attention to detail and change provides an invaluable historical resource that chronicles the development of modern Australia from one map to the next. Counties proliferate from a small group clustered around Sydney to encompassing the whole of Victoria by the mid-1860s. Here, as stated above, counties spread all along the coasts of New South Wales and Victoria with small enclaves in South Australia and Queensland. At least twenty-two different editions of Wyld's map of Australia are catalogued by the National Library of Australia, with twenty of them viewable online, while one of the other two is available via the Bibliothèque nationale de France and the other via the State Library of New South Wales.

Despite a long publication history, Wyld dated the editions of this map only from 1833 to about 1844, with the next dated edition appearing in 1890. Editions between 1844 and 1890 are universally undated, leading to countless cataloging errors. After comparing editions digitized by the National Library of Australia, the State Library of New South Wales, and the Bibliothèque Nationale de France, we have created a rough timeline for this map. The present map identifies MacDonnell county, which was not founded until 1857, thus suggesting a c. 1858 publication.

This map was created by James Wyld and was published c. 1858 in London. While multiple editions of this map do appear in various catalogs, we have not been able to isolate another example of this specific edition.