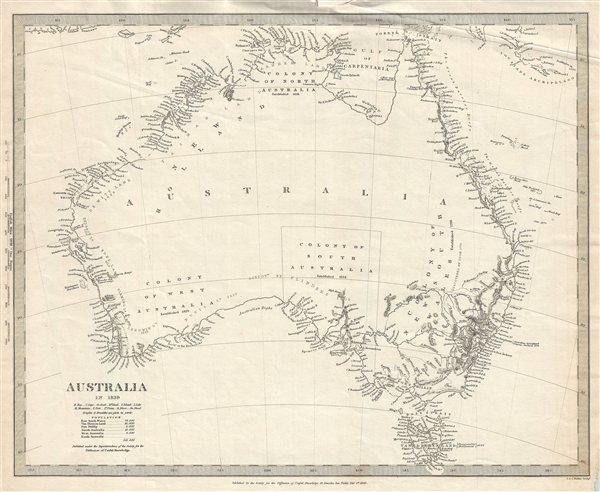 This is the 1840 first edition map of Australia issued by the Society for the Diffusion of Useful Knowledge or S.D.U.K. It covers the entire continent of Australia along with Van Diemen's Land or Tasmania in 1839. An interesting map issued just as most of the earth's non-polar shore has been explored. Gone are many of the errors of the previous century with the coastlines accurately rendered. Inland though, much remained confused. Vast stretches of unmapped territory and speculative cartography fill central Australia. The Colony of South Australia, established in 1834, is the only colony marked with an outline boundary. The map also notes several other colonies including West Australia, established in 1829, New South Wales, established in 1788, and North Australia, established in 1838. It identifies the years and names of the explorers who discovered these lands, including Cook in 1770, Flinders in 1802, Nuyt in 1627, de Witt in 1628 and Abel Tasman in 1642, among others

This map was part of A Series of Maps, Modern and Ancient, issued by subscription by the S.D.U.K. Each folder in the series would contain a set of two maps bound together. The map accompanying this folder, not included here, was of Asia. Original folder included the names of committee members of the ‘Society’, a list of maps already published, the folder number, which is this case was LXXXI, the contents and the printer and publication details. The folder at the time was priced at 1 shilling or 1 shilling 6 pence for maps colored. This map was engraved and printed by J. and C. Walker. Printed by William Clowes and Sons and published by the Society for the Diffusion of Useful Knowledge in their Feb 17, 1840 subscriber’s edition folder.