1867 Johnson Map of Australia and the East Indies 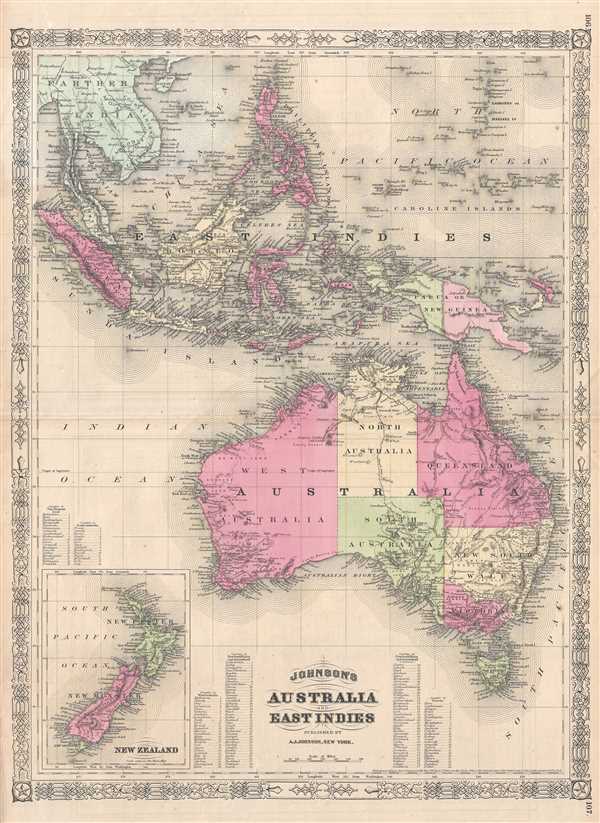 1867 Johnson Map of Australia and the East Indies

An uncommon and detailed map depicting Australia and the East Indies.

This is an 1867 A. J. Johnson map of Australia, the East Indies, and Southeast Asia. The map depicts from modern-day Thailand and Vietnam to Australia, including all of the East Indies, the Philippines, and New Guinea. Highly detailed, myriad islands large and small are labeled throughout the region. Individual islands in the Mariana and Caroline archipelagos are labeled, including Guam, Tinian, and Palau. Individual islands within the Philippine archipelago are labeled as well, along with islands in Indonesia as well Papua New Guinea, New Britain, and New Ireland. An advanced state of Australian exploration is illustrated, as the explorations of Burke, Wills, Stuart and Gregory are noted. An inset in the lower left corner details New Zealand, with numerous coastal locations and several cities and town labeled. Text along the bottom border notes counties in each province of Australia. The whole is surrounded by the fretwork border used to Johnson's atlas work from 1864 to 1869. This map appeared only in the 1867 – 1870 run of Johnson's atlases and is consequently among Johnson's more uncommon maps.

This map was prepared by A. J. Johnson for publication as page nos. 106-107 in the rare 1867 edition of his New Illustrated Atlas and copyrighted in 1867.