1864 Mitchell Map of Italy, Greece and the Austrian Empire 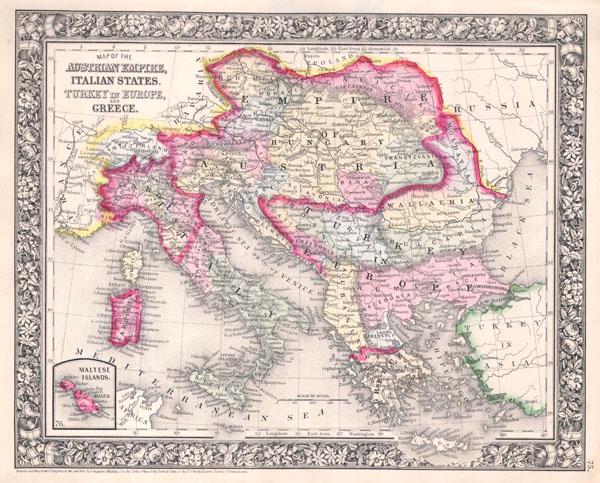 1864 Mitchell Map of Italy, Greece and the Austrian Empire

A beautiful example of S. A. Mitchell Jr.'s 1864 map of the Austrian Empire, Italy, Turkey in Europe and Greece. An inset in the lower left quadrant features the Maltese Islands. Denotes both political and geographical details. When this map was made Italy was in the midst of its struggle for national solidarity. Three powerful forces vied for control of the peninsula, the Kingdom of Sardinia, the Papal States, and the Kingdom of Naples. Two years after this map was made, in 1864, the forces of Garabaldi would finally consolidate Italy into a single nation. One of the most attractive American atlas maps of this region to appear in the mid 19th century. Features the floral border typical of Mitchell maps from the 1860-65 period. Prepared by S. A. Mitchell for inclusion as plate no. 75 in the 1864 issue of Mitchell's New General Atlas. Dated and copyrighted, 'Entered according to Act of Congress in the Year 1860 by S. A. Mitchell Jr. in the Clerk's Office of the District Court of the U.S. for the Eastern District of Pennsylvania.'