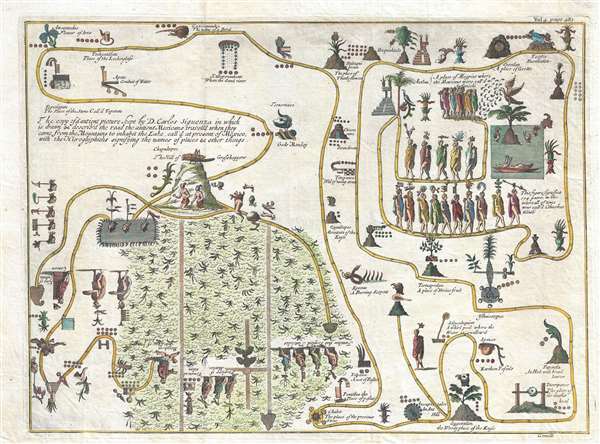 The first published representation of the pre-Columbian Aztec pilgrimage from Aztlan (Utah?) to Chapultepec (Mexico City).

The copy of a antient picture kept by D. Carlos Siguenza in which is drawn and describ'd the road the antient Mexicans travell'd when they came from the Mountains to inhabit the Lake, call'd at present of Mexico, with the Hieroglyphicks signifying the names of places and other things.
1704 (undated)     12 x 16 in (30.48 x 40.64 cm)

This unusual 1704 map, drawn by Giovanni Francesco Gemelli Careri, is the first published representation of the legendary Aztec migration from Aztlan, a mysterious paradise somewhere to the north of Mexico, possibly in the vicinity of the Great Salt Lake, Utah, to Chapultepec Hill, currently Mexico City. This map, supposedly a rendering copied from indigenous sources traces the pilgrimage conceptually and, though hard to follow as a map, embraces cartographic, historical, and spiritual elements. The various stations on the map are labeled in both Nahuatl and loose English translation. Aztlan appears here in the upper right corner as a lake in which sits a mountain and a palm tree. The progression meanders along many paths and digressions to finally arrive upper right quadrant where we see a hill upon which rests a gigantic Grasshopper - Chapultepec. As is typical of non-European cartography, there is no frim directional orientation, as the map, originally a codex, was intended to be rotated and examined from different perspectives.

The Aztec Legend of Aztlan

According to legend, on exactly May 24, 1065 CE, spurred by some unknown apocopltic event, the Mexica (Aztec) began an epic mass migration from their ancestral homeland, Aztlan, which translated means 'Place of Reeds' or 'Place of Egrets', to the shores of Lake Texcoco, in Mexico’s Central Mesa. The actual location of Aztlan remains a mystery, but linguistic similarities, as well as clues from surviving Aztec folklore, suggest somewhere in the vicinity of modern day Utah or Nevada. Arriving at the Central Mesa, the pilgrims founded the city of Tenochtitlan which, in time, spawned the mighty Aztec Empire famously encountered by Hernan Cortez several hundred years later. The migration, which seems to have lasted some 250 years, is comparable in scope to the Biblical wanderings of the Israelites recorded in Exodus. The legends associated with the Aztec wanderings gave birth to this conceptual and geographical map of places and events.

Humboldt Takes a Crack at the Mystery

Most of the early stopping points identified here are difficult to correspond with actual localities, but the later part of the migration seems to be historically rooted with sites like Chapultepec and Lake Texcoco clearly identifiable. Nonetheless, an attempt to reconcile the early points on the pilgrimage was made by no less than the renowned German naturalist and mapmaker Alexander von Humboldt. Humboldt was fascinated with indigenous cartographic knowledge and incorporated it into his many important maps – often with significant success. Humboldt no doubt had this very map before him (he references Gemelli) when he drew is seminal 1811 map of New Spain on which many of the stops on the Aztec migration, illustrated here, are noted.

Giovanni Francesco Gemelli Careri was a Neapolitan lawyer and adventurer who spent several years traveling the world in the 1690s. In Mexico, Gemelli was inspired by pre-Columbian culture and dedicated several chapters of his important book Giro Intorno al Mondo to discussing Aztec history and legends. This map, along with Gemelli’s important representation of the Aztec Calendar, first appeared in the 1704 English edition of his work – presumably Gemelli chose not to publish all of his maps and drawings in the earlier Italian edition. Though Gemelli’s work attained great fame in Europe, by the end of the 18th century it was considered to be mostly fictional. It was Alexander von Humboldt who, in 1811, resuscitated Gemelli’s reputation. In preparing his important map of New Spain Humboldt found himself impressed with Gemelli’s in depth geographical knowledge of Mexico, which he understood could only have been obtained through actual experience.

This map was published in the English edition of Gemelli’s A Voyage Round the World. Neither this map nor Gemelli’s important reproduction of the Aztec calendar appeared in the earlier Italian edition of his work.