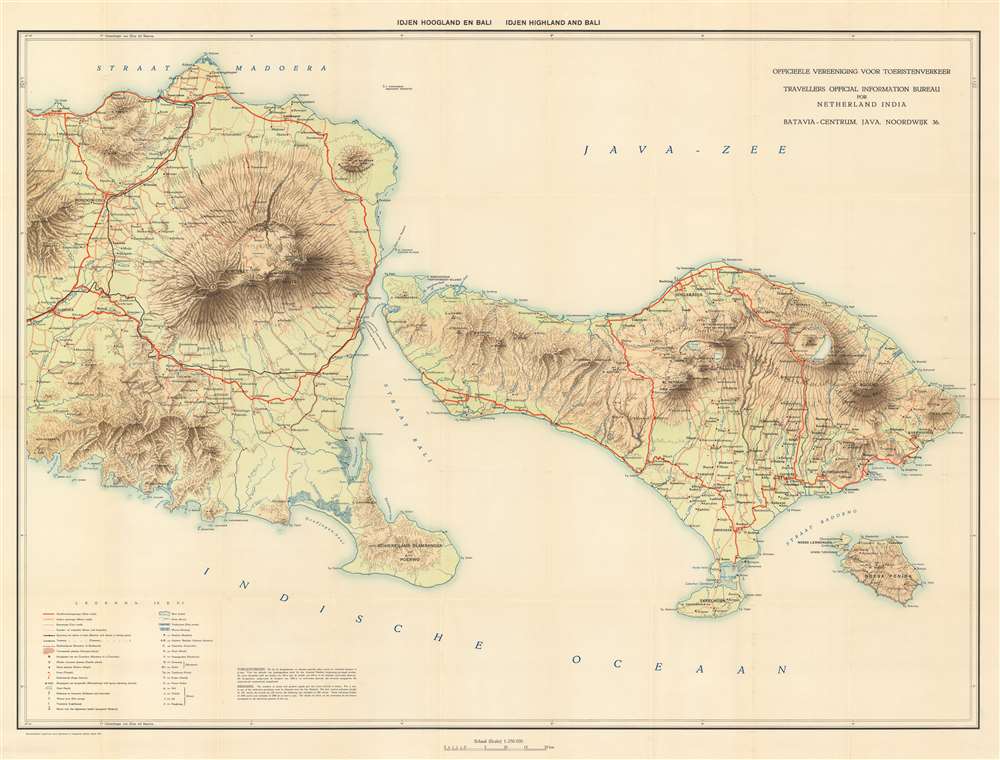 A tourist map created the same year as the release of a quasi-pronographic film lauched Bali into the minds of tourists worldwide.
$550.00

This is a 1932 Travellers Official Information Bureau for Netherland India bilingual Dutch and English map of eastern Java and Bali in Indonesia. Bali, recognized as one of the world's most sought-after tourist destinations, is situated on the right of the map, depicts the region from Mount Argopuro to the Lombok Strait and from the Bali Sea to the Indian Ocean. Towns and villages throughout the islands are labeled, including Bondowoso on Java and Denpasar, the provincial capital. Mount Raung, Ijen, Baluran, and the Wurung Crater are all illustrated on Java and Mount Batur and Mount Agung on Bali, providing incredible insight into the terrain of these two islands. Mount Agung on Bali is an active volcano and is rated as one of the most likely sites for a massive eruption in the next century. Roads of varying types are also noted, including major roads which are highlighted by thick solid red lines, motor roads, cart roads, and footpaths, which are marked by progressively fainter notations. A key situated in the lower left corner notes that native villages, temples, and sugar factories are among the locations noted.

Cornelis de Houtman, the first Dutch explorer to set foot on Bali, arrived in 1597. Five years later, in 1602, the Dutch East India Company was established. Although a Dutch presence was felt in the region as early as the late 16th century, and Java came to be dominated by the Dutch, Bali remained independent of Dutch control until the 1840s and the island would not be fully under Dutch hegemony until the early 20th century.

It was in the 1930s, with the writings of Margaret Mead, Gregory Batesopn, Miguel Covarrubias, Walter Spies, and Colin McPhee that Bali began to gain an image as 'paradise' in the Western world. But in 1932, the year this map was published, director Deane H. Dickason made a quasi-pornographic movie entitled Virgins of Bali and almost overnight the island became a popular tourist destination.

This map was created and published by the Travellers Official Information Bureawu for Netherland India in 1932. The OCLC catalogs four examples in institutional collections: two in the United States and two in the Netherlands. These examples are part of the collections at Harvard, the University of Chicago, the Leiden University Library, and the Dutch Defense Libraries.