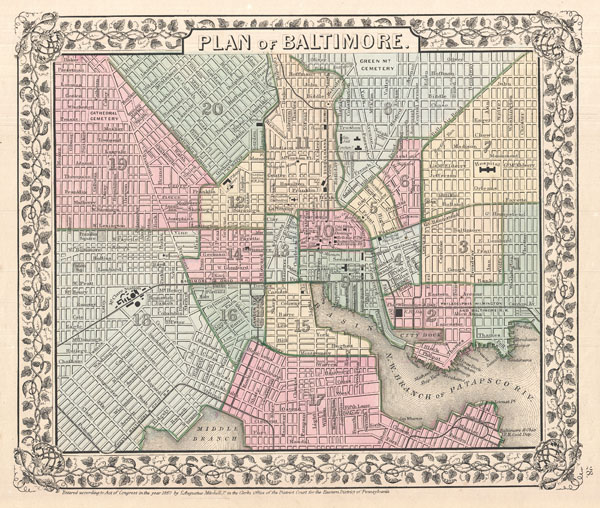 A beautiful example of S. A. Mitchell Jr.'s 1867 map of Baltimore, Maryland. Covers Baltimore from the Northwest Brach of the Patapsco River and Locust Point northwards as far as Green Mountain Cemetary and Oliver Street. Hand colored in pink, green, yellow and blue pastels to identify city wards. In general this map offers extraordinary detail at level of individual streets and buildings. Identifies the city Hospital, Railroad Depot, Mt. Clare Station, St. Mary's College, and the City Jail, among many other sites. Surrounded by the attractive vine motif border common to Mitchell atlases between 1866 and 1880. One of the more attractive atlas maps of Baltimore to appear in the latter half of the 19th century. Prepared by S. A. Mitchell Jr. for inclusion as plate no. 28 in the 1867 issue of Mitchell's New General Atlas. Dated and copyrighted, 'Entered according to Act of Congress in the Year 1867 by S. Augustus Mitchell Jr. in the Clerks Office of the District Court for the Eastern District of Pennsylvania.'