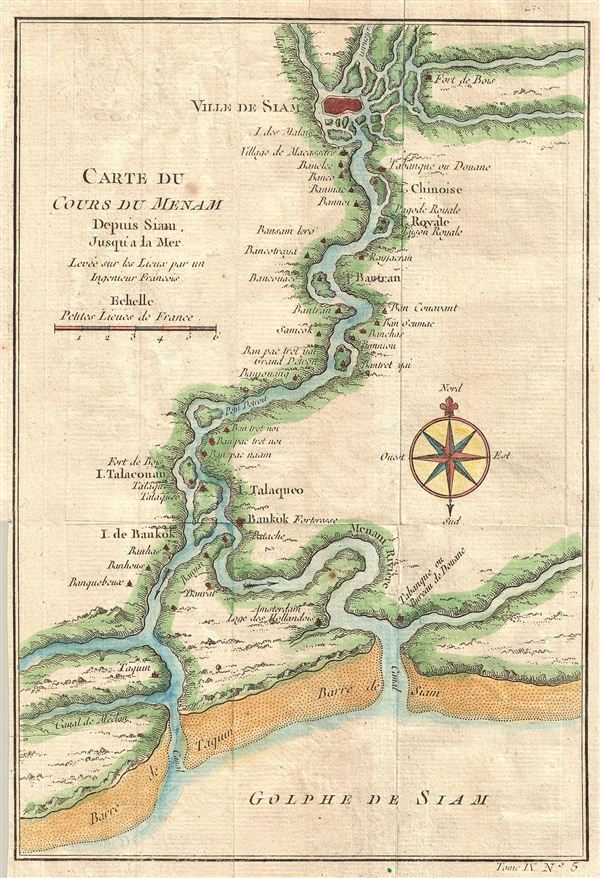 A beautifully hand-colored, copper engraving from the mid-1700s detailing the course of the Chao Phraya River from the former Thai royal capital Ayutthaya (known to europeans as the 'Ville de Siam'), past the small trading post of 'Bankok,' (Bangkok) to the Gulf of Thailand. Menam, or Mae Nam, literally means 'river.' Places identified along the river include the Royal Pagoda, the Bankok Fortress, and Dutch headquarters.

At the time this map was made, Ayutthaya was one of the most prosperous cities in east Asia, and possibly the largest city in the world, with close to 1 million inhabitants. Trade flourished with the Dutch, French, Chinese and Japanese, with influence spanning from the Malay Peninsula, the Andaman ports of present day Myanmar, the Angkor kingdom of Cambodia, to northern Thailand. Ayutthaya's power declined in the 1700s due to infighting among princes and officials.

Drawn by Jacques Nicolas Bellin and published as plate no. 5 in volume 9 of the 1752 French edition of Abbe Provost's L'Histoire Generale des Voyages.