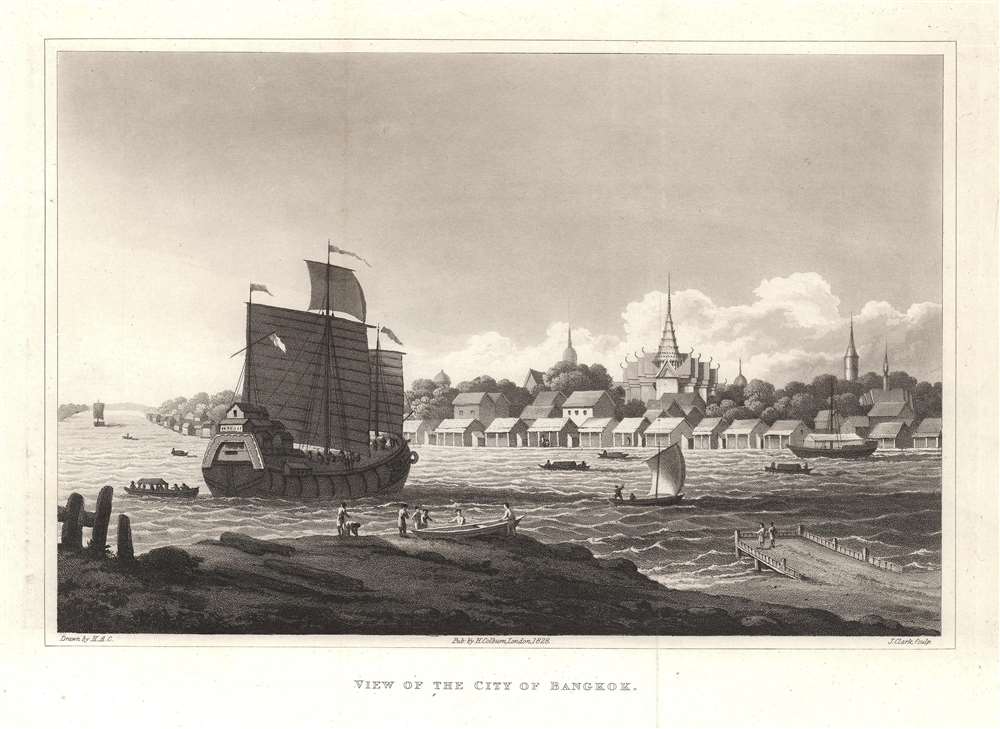 When Crawfurd arrived Bangkok it was not yet an exceptionally large city, but nonetheless had been made capitol of Siam in 1782 by Rama I. The larger population center and old capital was further north at Ayutthaya. Crawfurd dedicates significant attention to the city,

Bangkok extends along the banks of the Manam, to the distance of about two miles and a half; but it is of no great breadth, probably not exceeding one mile and a half. The principal portion of the town is on the left bank of the river, where the palace is situated. The accounts which we received of it population were very vague and little to be relied on. Some of them made it amount to as much as one hundred and fifty thousand. Judging by the extent of ground on which it stands, I should not be disposed to estimate the inhabitants at more than one-third of this number.

The map view drawn by the mysterious H.A.C. in late 1822 or early 1823, but was not printed until John Crawfurd included it in the 1828 publication of his Journal of an Embassy from the Governor-General of India to the courts of Siam and Cochin-China: exhibiting a view of the actual state of those kingdoms.. It was engraved in London by John Heaviside Clark and was published by Henry Colburn. The view was included in all editions of Crawfurd's work, but is rarely found separately and is scarce to the market.

John Heaviside Clark (December 7, 1771 - October, 1863), a.k.a. 'Waterloo Clark', was a Scottish engraver and painter active in Edinburgh and London in the first half of the 19th century. Clark was born in Edinburgh, Scotland. He specialized sea and landscape acquaints. He is best known for his sketches of the Battle of Waterloo (1815) made first-hand on the field of battle - earning him the nickname 'Waterloo Clark. Clark specialized sea and landscape aquatints, which were regularly exhibited at the Royal Academy between 1801 and 1732. He was the author of A practical essay on the art of Colouring and Painting Landscapes, with illustrations, published in 1807, and A practical Illustration of Gilpin's Day, 1824. Clark died in Edinburgh in 1863. Learn More...