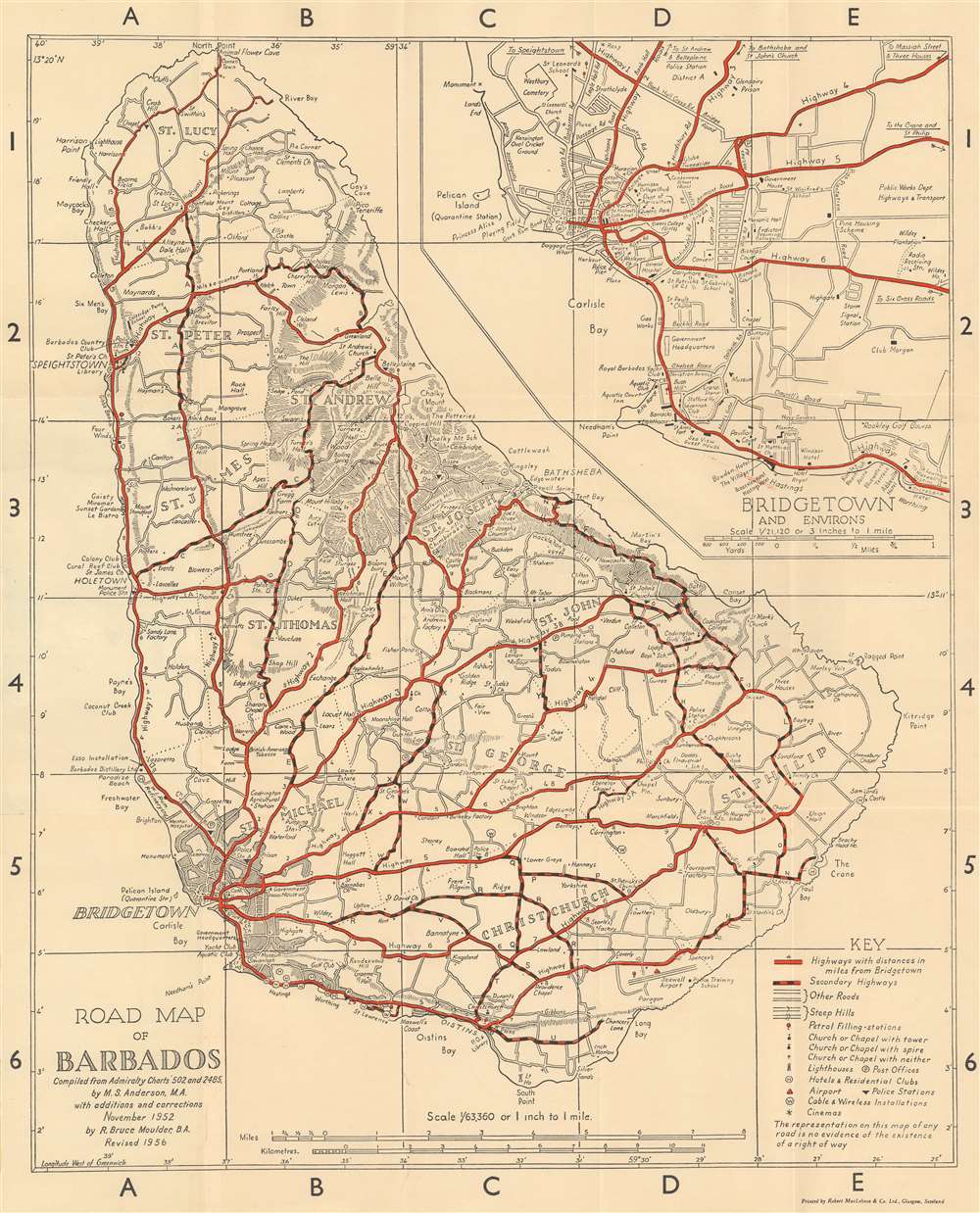 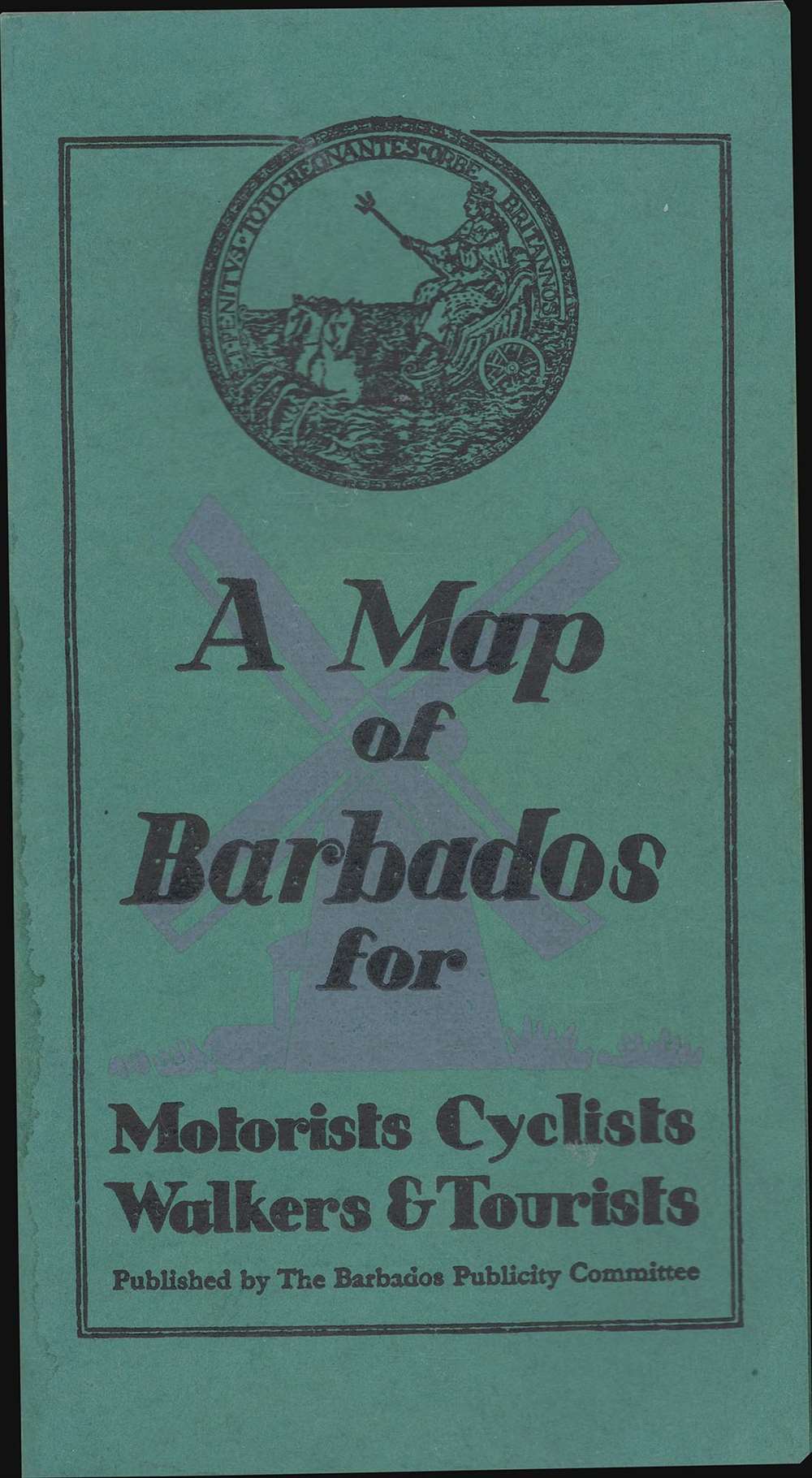 This is a 1956 Margaret Anderson and R. Bruce Moulder road map of Barbados. Red lines highlight major highways, while red and black dashed lines follow secondary highways. Distances along the major highways are marked by small numbers near the route. Roads marked by two thin black parallel lines are 'other roads' per the key situated in the lower right corner. Symbols mark churches, lighthouses, police stations, and gas stations around the island. Cities, towns, and other settlements are identified, along with coastal locations and various other inland locations. An inset of Bridgetown and its environs is situated in the upper right. Here, Anderson and Moulder identify parks, a playing field, cemeteries, schools, and churches.

This map was compiled by Margaret Swainson Anderson in 1952 and revised by Richard Bruce Moulder in 1956. We have located cataloged examples of earlier and later editions in institutional collections, but the present example of the 1956 edition is the only cataloged example of this edition.

Margaret Swainson Anderson (June 14, 1902 - September 15, 1952) was a British geographer, cartographer, and educator. Born in Barnsley, Yorkshire, she attended Blackheath High School and then the Perse High School for Girls in Cambridge. She was a scholar at Girton College from 1921 through 1925. She taught at Malvern Girls' College for a year before being appointed as an Assistant Lecturer in Geography at Manchester University in 1926. She became a University Demonstrator in the Department of Geography at Cambridge in 1928. That same year she was made Director of Studies in Geography at Girton College. She resigned both posts in 1933 to move to Barbados and marry Frank Cordue Kennedy Anderson, an electrical engineer, where the couple lived until 1936. While in Barbados, she published a book about the birds of Barbados (1935) and helped found the Barbados Museum and Historical Society. She and her husband also collaborated on the creation of the first road map of Barbados, in preparation for which they traveled every one of the island's roads. Anderson and her husband returned in England in 1937, where Anderson gave birth to their daughter Margaret. Anderson began lecturing in physical geography to Royal Navy and Royal Air Force cadets in Cambridge in 1942. In 1944 she was renamed the Director of Studies in Geography at Girton and was elected into a Staff Fellowship at Girton in 1948. Also in 1948, Girton became a University Lecturer at Cambridge where she taught climatology and human geography. She traveled widely over the course of her lifetime, including throughout South America and the West Indies. The last line of her obituary in The Geographical Journal reads, 'Those of us who knew her will remember her as an able and loyal colleague, as a vivacious and lively companion, and as one who by her own high standards of scholarship and kindness set an example that other would like to follow, but will seldom be able to emulate'. Learn More...


Richard Bruce Moulder (1907 - May 5, 1966) was a British architectural designer born in British Guiana. Very little is definitively known about Moulder, but our research indicates that he spent most of his life on Barbados. He married Mary Gwendoline Pitcher in 1933, with whom he had two children, at least one of them a daughter. He died in Barbados in 1966. Learn More...