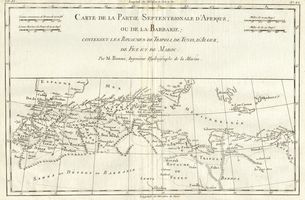 This remarkable map of North Africa's Barbary Coast (Morocco, Algeria, Tunisia, Libya). Bonne was the successor to Bellin as head Engineer of the French Hydrographe del la Marine Department. This region is known for the terrible pirates who, for centuries, terrorized the Western Mediterranean. Towns, churches, cities and mountains are depicted as miniature representations of themselves. This map is highly detailed and beautifully crafted.