1891 Map of Barcelona, in Preparation for the Redesign of the Ciutat Vella 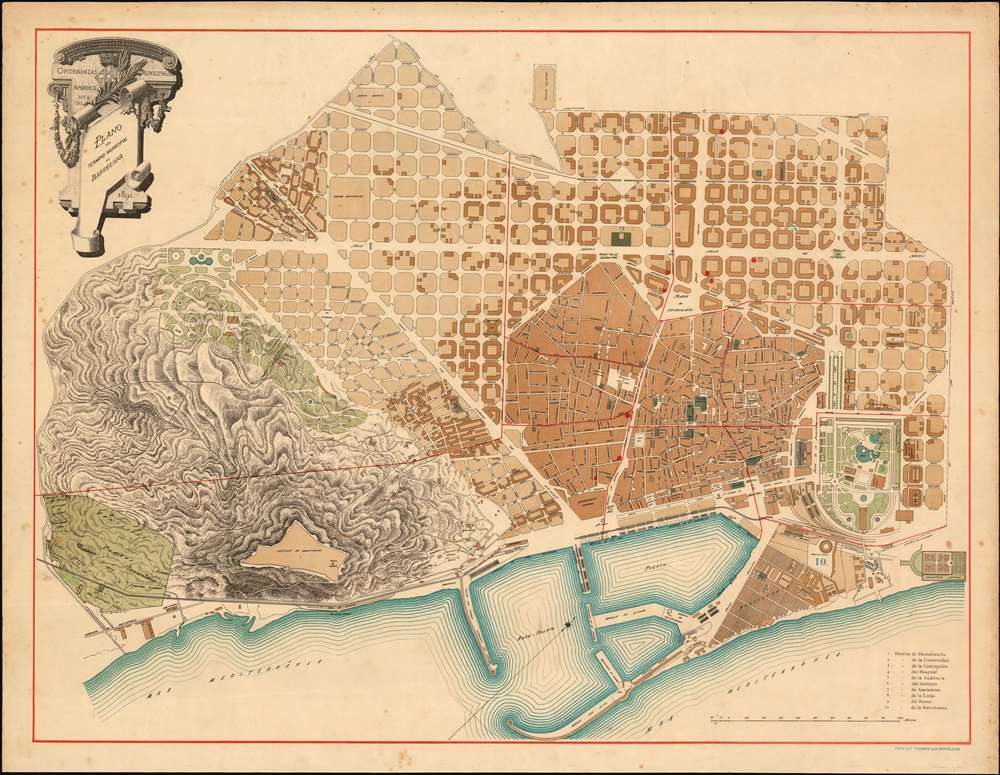 1891 Map of Barcelona, in Preparation for the Redesign of the Ciutat Vella

This rare 1891 map of Barcelona chronicles the rapid pace of urban renewal in the city that took place in the latter half of the 19th century. The plan focuses on the municipality of Barcelona. It is oriented to the northwest, with the city's port and the Mediterranean Sea along the bottom of the lithograph. To the south of the city, the castle and park of Montjuïc are shown with their topography elegantly depicted in hachure. \To the west and north, Barcelona's characteristic grid of octagonal blocks can be seen filling up. This grid was implemented here and in the surrounding Eixample district after 1860 on the plan of Ildefons Cerdà i Sunyer, which was a process that had accelerated after the Universal Exposition of 1888. The development of the Parc de la Ciutadella and the development of La Barceloneta was also part of the 1888 Exposition, and is new on this plan. Although unpopular at first, Cerdà's plan attained enough support that the reconstruction began in earnest.  Eventually, Barcelona became a hub of modernism, giving rise to the work of Art Nouveau architects like Antonio Gaudi.  Today, Barcelona is one of the few old European cities that exhibits a comprehensive central plan and, due to Cerdà's vision, is considered one of Europe's most beautiful metropolises.

The Problem of the Ciutat Vella

The utopian modernism of Cerdà's plan, evidently, was not applied to the oldest part of the city. Despite the removal of the medieval city walls, the claustrophobic layout of the Ciutat Vella remained untouched by the redevelopment apparent on the rest of the plan: hence the purpose of its publication. In 1891, in response to royal decrees of April 12, 1887 and July 14, 1889, A municipal ordinance was issued to plan the radical reconstruction of the old city. The ordinance was accompanied by an appendix of three plans: one of the entire Eixample district surrounding Barcelona, one of the Municipality of Barcelona itself. A third focused specifically on the Ciutat Vella, illustrating the planned radical reconstruction of the city center to make it more consonant with the rest of the city's development. All three are credited to one D. J. M. Serra, and were executed in chromolithograph by the Barcelona photolithographer Thomas and Co. All three plans appear to exist in a single edition.

The Plan of the Municipality

This, the second of the three 'Ordinanzas Municipales' plans, shows the municipality of Barcelona, centering on the problematic medieval part of the city.

This plan is rare. It appears separately in no auction records or dealer catalogues. We see no examples of the individual map appearing in OCLC, and the full set appears in only two institutional collections, the Universitat Politècnica de Catalunya and Universitat Autònoma de Barcelona.

D. J. M. Serra (fl. 1890) was the Spanish author of a trio of city plans proposing the redevelopment of the old city of Barcelona along modern lines. He appears to be credited with no other published work, and there is no bibliographical record for him. Learn More...


Ildefons Cerdà i Sunyer (December 23, 1815 - August 21, 1876) was a Catalan civil engineer active during the mid-19th century.  Cerdà was born to a wealthy family in Centelles and studied engineering in Madrid.  He moved to Barcelona in 1848 and, appalled by the city's sunless cramped streets and horrific sanitary conditions, lobbied for and successfully instituted a complete urban renewal. Learn More...