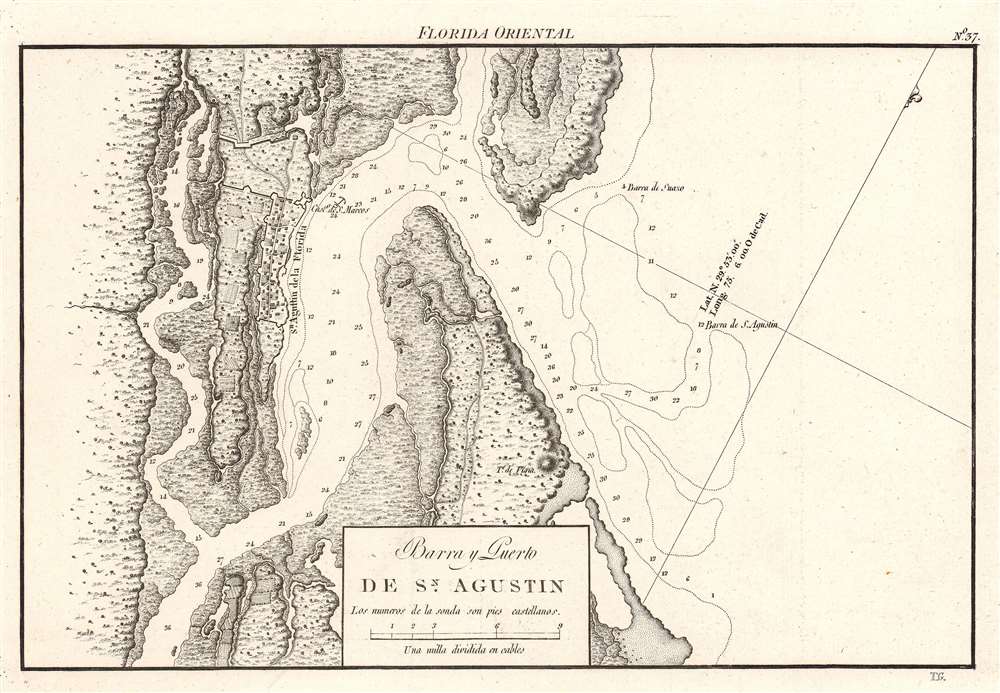 A rare find, this is the 1809 Dirección de Hidrografía nautical chart or map of St. Augustine, Florida, published in Portulano de la America Setentrional. Detail includes the settlement's individual buildings and fields, with the more prominent constructions, such as the Castello de San Marcos labeled. Depth soundings appear in the Matanzas River and the Saint Augustine Inlet, with markings for safe anchorage.

This 1809 map was engraved by Tomás González and issued as plate thirty-seven in the Portulano de la America Setentrional, published by the Dirección de Hidrografía. We note a single example of the separate map in OCLC, at the Biblioteca Nacional de España. Nine examples of the complete atlas are cataloged in OCLC in collections worldwide.


Tomás González (fl. c. 1809 - c. 1832) was a Spanish engraver active with the Dirección de Hidrografía in the early 19th century. Very few references appear to González appear in the historical record. It appears he was sent to Paris in 1802 to learn lithographic printing. Learn More...

Direccion Hidrografia, Portulano de la America Setentrional (Madrid: Direccion de trabajos hidrograficos) 1809.     Portulano de la America Setentrional, was one of the last great works of the Spanish Admiralty focusing on North America. It is a rare atlas with maps detailing Spanish harbors in Central America, North America, and the Caribbean. Work on the atlas began in 1792 when Admiral Jose de Mazaredo y Salazar and Vincente Tofiño dispatched two scientific mapping expedition to the Americas with the goal of creating Spanish charts for use by the Spanish Navy. Until 1787, the Spanish government had jealously guarded its geographical and hydrographical knowledge, to the point of restricting map publication, but King Charles III lifted this prohibition as part of this Enlightenment reforms. The dispatched expeditions completed their work by 1805 but had sent manuscript charts back to Cadiz on a regular basis. The Dirección de Hidrografía published the Portulano de la America Setentrional in 1809 and its consisted of 121 charts divided into four sections: Puertos de las Islas Antillas (fourteen plates); Puertos de las Costas de Tierra- Firme, Florida y Seno Megicano (thirty-six plates); Puertos de la Isla de Cuba (thirty-four plates); and Puertos de las Islas de Santo Domingo y Jamayca (twenty-two plates). Published during the Peninsular War between Spain, Portugal, and the United Kingdom against the invading and occupying First French Empire (1807 - 1814), very few examples were printed. In many ways it's extraordinary that any examples were printed at all. The unfortunate reality is that this magnificent piece of scientific hydrography had never gained the recognition it deserves. The Dirección de Hidrografía reissued the atlas in 1818, which is nearly identical to the 1809 edition except for the addition of the phrase 'Aumentado y corre-gido en 1818' to the title page. An completely reengraved edition was published in Mexico City in 1825.