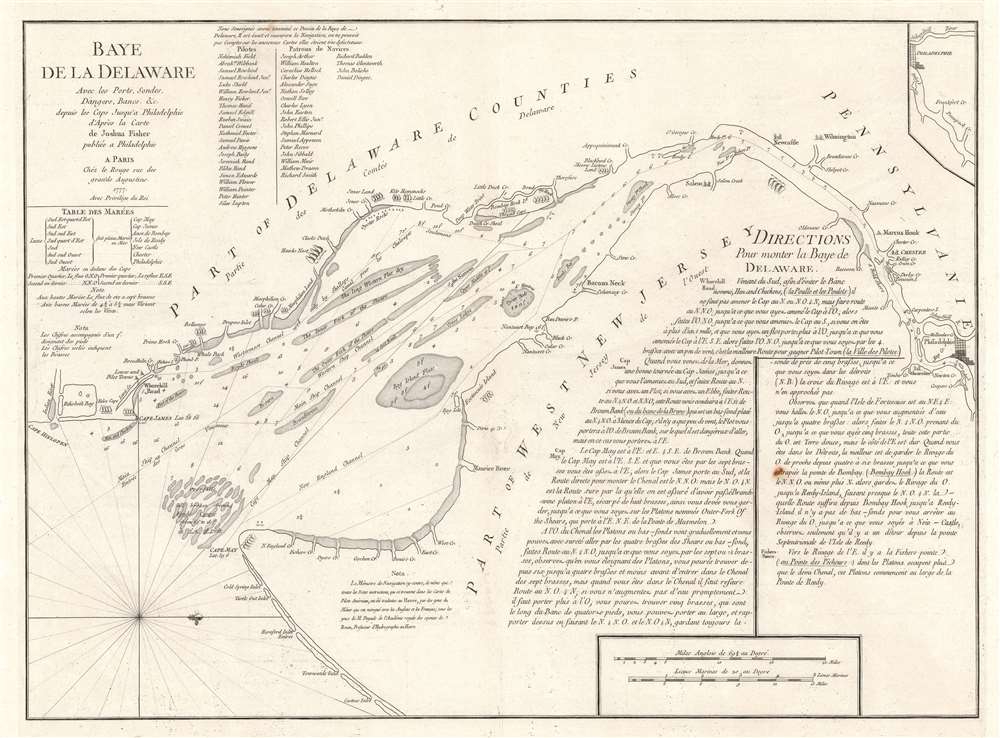 A French edition of Joshua Fisher's chart of Delaware Bay, considered to be one of the most important maps of the vicinity of Philadelphia ever produced.

This 1777 George-Louis Le Rouge nautical chart or maritime map of Delaware Bay is a French edition of a near unobtainable chart by the self-taught Philadelphia cartographer Joshua Fisher. The chart depicts the region from just south of Cape Henlopen (labeled here as Cape James) to Philadelphia and from Delaware to Cape May and the Atlantic Ocean. Channels, shoals, ledges, flats, and other navigational hazards are illustrated, as are several different channels, all of which are labeled. Depth soundings are included along each of these channels as well. Coastal landmarks are identified, including both Cape Henlopen and Cape May with their latitudes noted. An inset of the waterway above Philadelphia is situated in the upper right corner. Detailed navigational instructions for the bay are included in the bottom right quadrant.

A History of Joshua Fisher's Chart

Considered to be one of the most important maps of the vicinity of Philadelphia ever produced, Philadelphia-based merchant turned cartographer produced the chart Joshua Fisher and his brother-in-law completed a survey of Delaware Bay. Fisher's interest in the bay was possibly instigated by his previous job as a hatter and his involvement in the fur trade. Delaware Bay is notoriously difficult to navigate and, at the time of the publication of Fisher's first chart, pilots were required to successfully avoid the many underwater dangers. Fisher published the first edition of his chart in 1756, in the middle of the French and Indian War. The Pennsylvania Assembly believed the difficulty in navigating Delaware Bay to be an important defense against the French, thus Fisher's chart was suppressed and only a handful of copies were sold.

Eventually Fisher published a second edition of his chart, on which the current example was based. This second edition was engraved on a smaller plate but depicted a larger geographic area. A handful of examples of this chart exist in American libraries, but no publication information was printed on the chart, making it impossible to know exactly when it was published. It is presumed that it was published in Philadelphia in 1775, near the beginning of the American Revolution. Fisher's two charts are virtually unobtainable today. Examples of this second edition made their way to Europe and three editions were published in London in 1776 by William Faden, Sayer and Bennett, and A. Dury. An edition is also found in Laurie and Whittle's North American Pilot from 1795. The current French example was published by Le Rouge in 1777 for his Pilote American Septentrional. Another French edition was published in Neptune Americo-Septentrional.

This map was created and published by George-Louis Le Rouge in 1777. The OCLC records examples as being part of the collections of the New York Public Library, the Hagley Museum and Library in Wilmington, Delaware, the Library of Congress, the Newberry Library in Chicago, the University of Wisconsin-Milwaukee, the William Clements Library at the University of Michigan, and the University of Bern in Switzerland. We are aware of only a handful other instances when this chart has entered the private market.

George-Louis Le Rouge (c. 1712 - 1780) was a Paris based map publisher operating in the middle part of the 18th century. Le Rouge was born in Hanover Germany as Georg Ludwig, where he was educated and employed as a military engineer and surveyor. Around 1740 Le Rouge moved to Paris, Francophied his name, and set up shop on the Rue Des Grands Augustins as an engraver, book publisher and map publisher. Despite being born German and adopting Paris as his home, Le Rouge was an ardent Anglophile and spent much of his time translating English books and maps into French. Much of his cartographic work was based upon English maps. During his active period of roughly forty years Le Rouge produced thousands of maps and diagrams ranging from city and town plans, to atlases, plans of military campaigns and sea charts. He was awarded by his diligence with the title 'Geographe du Roi'. Le Rouge also worked with Benjamin Franklin to produce the important 1769 Franklin/Folger Map of the Gulf Stream. Franklin, who met Le Rouge in Paris, writes that 'He [Le Rouge] is, I believe, a proper person.' Le Rouge Cohn, Ellen R., Benjamin Franklin, Georges-Louis Le Rouge and the Franklin/Folger Chart of the Gulf Stream, Imago Mundi, Vol. 52, (2000), pp. 124-142.


Joshua Fisher (1707 - January 31, 1783) was an American hatter, merchant, politician, and a self-taught surveyor. Born in Delaware, Fisher married Sarah Rowland in 1733 and the couple settled down in Lewes, Delaware. Risher and his wife moved to Philadelphia in 1746, where he opened a general store. Upon his move to Philadelphia, Fisher carried with him several letters of introduction from friends and neighbors in Delaware proclaiming him to be a quiet, peaceable neighbor and 'a worthy Honest Man'. While living in Delaware, Fisher served as the coroner of Sussex County and as the deputy-surveyor of Delaware. =

Very good. Even overall toning. Light wear along original centerfold. Area of infill along centerfold. Light soiling. Blank on verso.
Looking for a high-resolution scan of this?