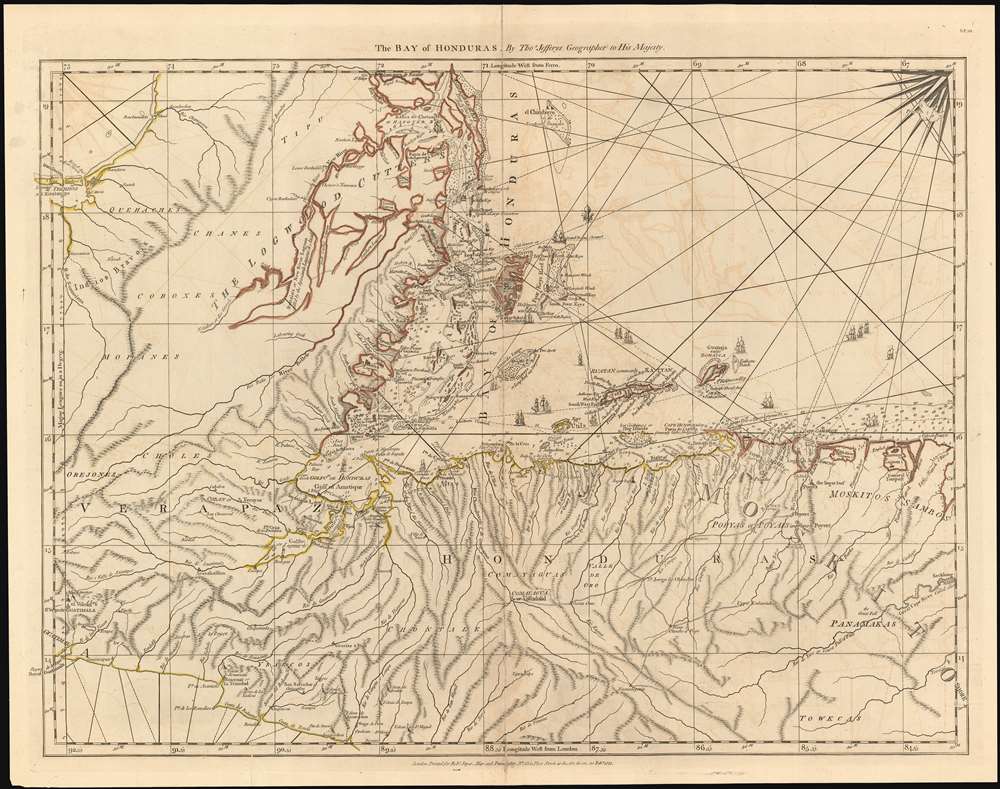 This 1775 Jefferys map of Belize, Honduras, Guatemala and El Salvador is the earliest, acquirable, detailed map to focus on the region. It is informationally rich, showing anchorages, depth soundings and common sailing routes (replete with dozens of ships.) The region’s plentiful reefs, islands and lagoons are shown and named. This map brings into sharp focus coastal Belize and Honduras where English privateers and merchants had long operated – shortly after Spain began to tolerate their presence, but just prior to Britain’s official administration of Belize as a colony.

The map provides the reader some of the first glimpses of what is now a favorite vacation spot in Central America. Of Ambergrise Caye (Ambergreese Key on the map) it is noted that there are plenty of deer and ‘ambergreese (is) often found on the beach.’ Cangrejo Caye and Caye Caulker (Corker Key) are shown, as is Blackadore Caye - an island now apparently owned and run as an eco-resort by Leonardo DiCaprio. Some of the world’s best diving sites are charted here: the map’s ‘Four Keys Reef’ corresponds to the Belize Barrier Reef. Half Moon Caye is marked, though the Reef’s famous ‘Blue Hole’ does not appear. This absence is not surprising: the Blue Hole is well within the bounds of the barrier reef, making it virtually inaccessible to navigators of the 18th century. In testament to this, the eastern approach to the reef is marked with four charted sea-wrecks, two of them named. The Placencia region - the point and the famous mangrove lagoon - both appear on the map. The Garifuna towns of Hopkins and Dangriga do not yet appear: though this entire region would see significant Garifuna settlement in the 19th century, the initial marooning of the Garifuna to Roatan island by the British would not occur until 1796, more than twenty years after the production of this map.

The interior of Belize shows significantly less detail than the coast, but identifies the course of the Belize River and the New River, and a network of poorly-understood lagoons. While indigenous tribal names such as the Tipu appear here, more prominent is the domain of ‘THE LOGWOOD CUTTERS,’ referring to the primary export of the region from the earliest colonial period onward. Logwood – like Brazil wood – could be processed to provide a deep red dye, and a superior ‘fast black’. In the 16th century the Spanish harvested logwood from the Yucatan; British pirates commonly stole the cargoes, a single load of which was worth more than a year’s cargo of other merchandise. In the 17th century, the English began to establish logging camps in what would become interior Belize, and these logwood cutters began shipping as much as 13000 tons of logwood to England yearly. Over the course of the 18th century, the baymen systematically used slaves brought from Africa and the West Indies to cut the logwood, many of whom died from disease, malnutrition and at the hands of their owners. The logwood cutters, both black and white, are depicted in the national emblem of Belize, which appears on currency and the Belize flag.

The northern coast of Honduras is shown from the Gulf of Honduras to Barra Patuca (Patook Point on the map.) RoatánIsland and Guanaja are shown surrounded with sandbars. English settlements are shown in the vicinity of Cape Camaron and in ‘Brewer’s Lagoon,’ now Brus Laguna at the northern edge of the Mosquito Coast. The interior regions of Honduras are shown in greater detail than those of Belize, reflecting the regions longer Spanish colonial presence.

The map shows from Guatemala City eastwards, including most of El Salvador and the northern departments of Nicaragua, including Nueva Segovia.

This map was engraved and published by Thomas Jefferys in London to accompany the 1776 West India Atlas. The atlas was published by Robert Sayer, and is considered the definitive Revolutionary War Area cartographic work focusing on the Caribbean, Gulf of Mexico, and Antilles. Examples of the separate maps come to market time to time, but are increasingly rare and desirable.

Sayer, R. The American Atlas: Or, A Geographical Description Of The Whole Continent Of America ... Engraved On Forty-Eight Copper Plates, By The Late Mr. Thomas Jefferys, Geographer to the King, and Others. London, Printed and Sold by R. Sayer and J. Bennett, Map and Print Sellers, No. 53, Fleet-Street. MDCCLXXVI. (London: Sayer) 1776.