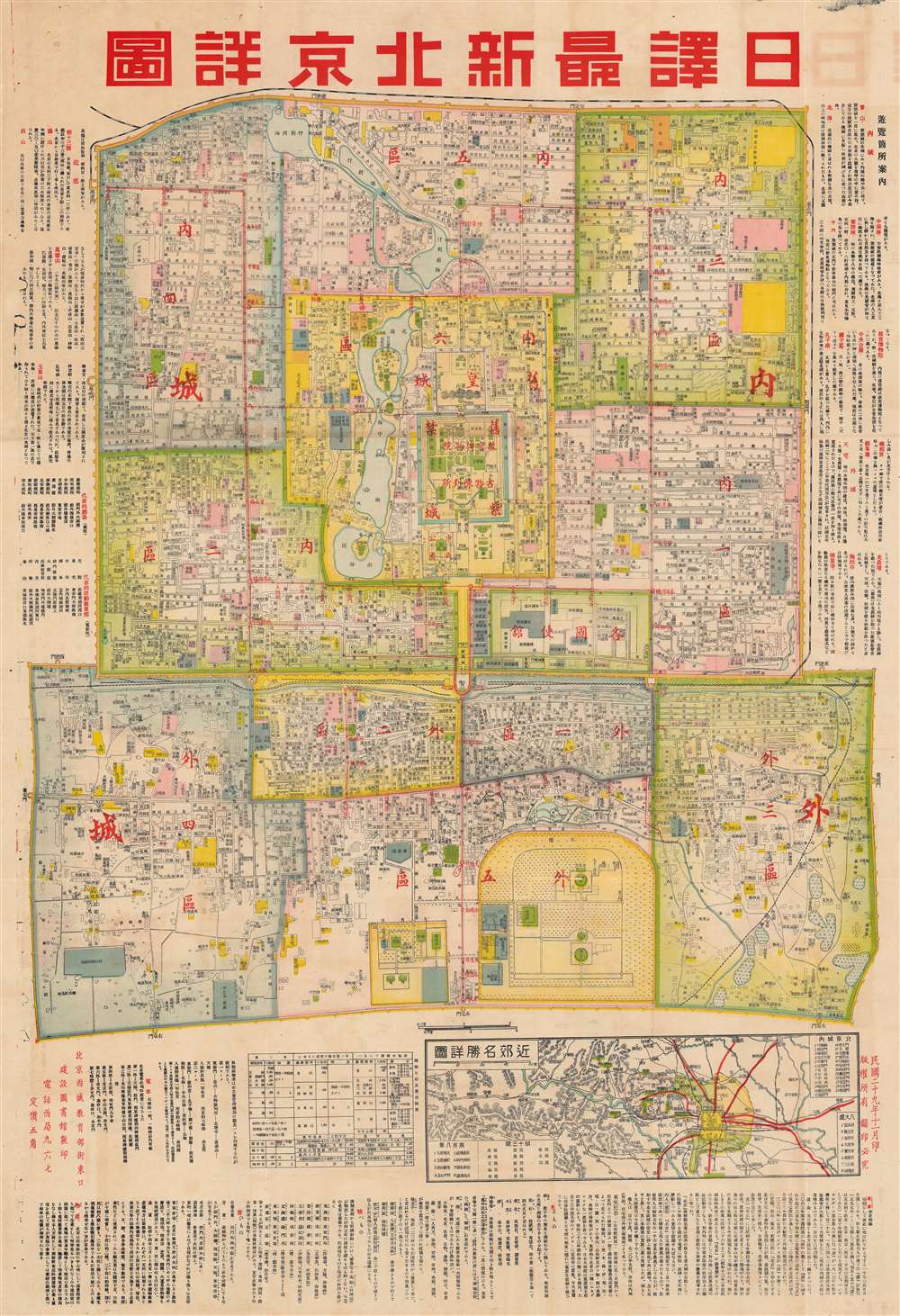 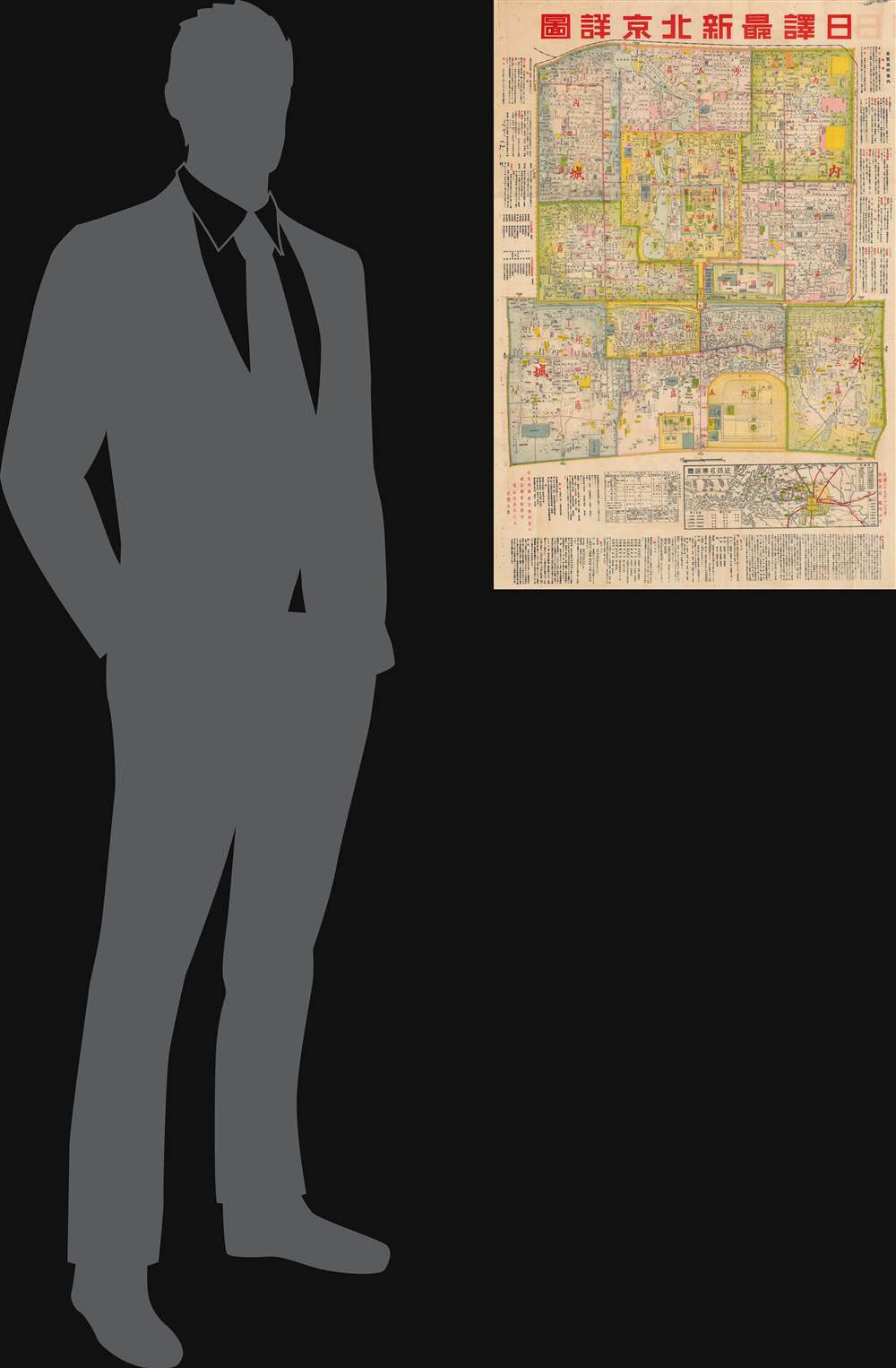 Tourism to Beijing under the Japanese occupation.
$650.00

This is a very rare 1940 bilingual (Chinese-Japanese) large format folding map of Beijing, published under the Japanese occupation during the Second Sino-Japanese War (World War II).

This map was intended for the thousands of Japanese businessmen, tourists, and military or government figures who resided in or passed through Beijing during the war years. Although undoubtedly a document with political valence given the war and occupation, it was primarily intended for tourism. Beginning in the right margin and continuing to the left and bottom margins, information is provided on major tourist attractions beginning with the Forbidden City and its associated gates, lakes, and museums (the transition of the complex from a seat of political power to an historical and cultural relic was still recent and incomplete at this time). Next, more temples, palaces, and tombs in the Inner City, Outer City, and in the countryside surrounding the city (近郊) are listed.

Curiously, the Great Wall of China (usually 萬里長城 in contemporary Japanese sources) is not mentioned, though hand-drawn red lines on the inset map at bottom show routes to Shahe (沙河), Gaoliying (高麗營), and Shunyi (順義), all in the direction of the Great Wall, suggesting that the map's original owner at least considered a trip to the wall. The reason for the wall's omission could be because it had not become anything like the easily accessible tourist site that it is today and was generally ignored in the first half of the 20th century, languishing in a state of disrepair. It may also have been because the wall had seen fighting between Japanese and Chinese forces in the recent past (1933) and was still partially in use by the Japanese military. Moreover, the Great Wall was touchy from the standpoint of the Japanese occupation, as some Chinese nationalists and leaders of the Communist Party had begun to use it as a symbol of the strength and longevity of the Chinese nation in the face of foreign invasion.

Aside from the tourist sites themselves, the marginal notes provide 'representative' lists of theaters and movie houses, suggested itineraries and their associated costs, a brief history of the city, and information on streetcars, shopping, and dining.

This map is remarkably detailed down to the individual street and building level, including the interior grounds of landmarks like the Forbidden City and Temple of Heaven. It reflects the division of the city adopted after the fall of the Qing Dynasty, where the Inner City was separated into six districts and the Outer City into five. The map assiduously marks temples, pagodas, government offices, streetcar lines and stations, railways, and more. The makers have even gone through the effort of naming most of the individual hutong (alleyway neighborhoods).

Beijing has gone through many name changes over its history, and came to resemble the city shown here in the late 13th century as Dadu or Khanbaliq, the winter capital of the Mongol Yuan Dynasty. It became Beijing (meaning 'northern capital') in 1403, when the Ming Emperor Yongle moved the capital from Nanjing ('southern capital') to be closer to the front line of the ongoing war with the Mongols. Under the Ming, Beijing began to take on its modern form, with the Forbidden City, and the city walls protecting and separating the inner and outer city. The Qing Dynasty elaborated the already-grandiose Ming city with more palaces and parks.

Beijing initially remained the national capital after the fall of the imperial dynasty and the transition to a republic in 1912, although central power remained weak. The imperial family continued to live in the Forbidden City until 1924, even after several failed attempts to restore the monarchy, most notably in 1917. The city grew rapidly at this time and the municipal government was eager to add the trappings of modernity while maintaining the city's basic structure. Beijing suffered when the country was more-or-less united and the capital moved (back) to Nanjing by Chiang Kai-Shek in 1927-28, whereupon Beijing was renamed Beiping.

In the mid-1930s, the Japanese military gradually approached the city from Manchuria (occupied by Japan since 1931) in an on-again, off-again conflict with Chinese forces. One of these many skirmishes took place on July 7, 1937, at the 'Marco Polo Bridge' at Lugouwiao 盧溝橋, to the southwest of the area here detailed. However, by this point, Chiang Kai-Shek had to bow to public opinion and, somewhat reluctantly, throw his armies into a full-scale war against the better trained and equipped Japanese. In retrospect, the 'Marco Polo Bridge Incident' is generally seen as the start of the Second Sino-Japanese War and World War II in Asia.

By December 1937, a collaborationist administration was established in Beijing, with much of the bureaucracy remaining in place and operating as before. Local Japanese-affiliated elites advocated for returning the national capital to Beijing or at least maintaining Beijing's autonomy under a new Japanese-affiliated republic, setting off an intense debate between Beijing, Nanjing, and Tokyo that was not settled for several years. Far from these high-level political machinations, the life of Beijing's commoners became more difficult and tenuous as the war dragged on, bringing shortages of supplies and skyrocketing inflation (obliquely referred to in the last section at bottom, which notes that a 'restoration of security in the future' (今後治安の回復) should improve the availability of goods). Amid the desperate wartime conditions, vice industries like gambling, opium, and prostitution flourished and vulnerable members of society (especially women, children, and the elderly) were pushed into marginal occupations, such as collecting scraps of cloth and other materials from garbage for recycling.

The Legation Quarter (各國使館) southeast of the Forbidden City arose in the wake of the Second Opium War (1856 - 1860), when China was forced by Western powers to adopt a Western-style system of foreign embassies and diplomats. This quarter endured a weeks-long siege during the Boxer Uprising (1899 - 1901) but held out until relieved by the forces of the Eight Nation Alliance (in which Japan played a paramount role). In the following years, the entire area was rebuilt, and foreign garrisons (兵營) were added to the embassies. In the early 20th century, an expanding railway network connected Beijing with other major cities in northern China. Railways traveling to the east and west opened on either side of the Zhengyang Gate (正陽門), also known as the Qianmen 前門 neighborhood (Qianmen meaning 'in front of the gate'), while Beijing North Railway Station (北京北站) was opened on the city's northwest side near Xizhimen (西直門) in 1906.

The developing streetcar (電車) network of Beijing is also evident. Schools, post offices, telegraph offices, hospitals, prisons, and water stations all proliferated in the 1920s - 30s, as municipal authorities tried to build a modern city on the edifice of the imperial capital. The city would go through additional expansion and changes in the following decades, most notably during the early years of the People's Republic era, when most of the city walls were torn down for the construction of the Beijing subway and the 2nd Ring Road, which follows the course of the city walls.

This map was published in November 1940 (Minguo 29) by the Beijing Xicheng Construction Library, located in the Xidan neighborhood. The map is similar though not identical to a Japanese-language map of Beijing from several years earlier (Beijing-anon-1930), as well as Chinese language maps from the same era (beijing-weinanlibrary-1925, Beijing-streetmap-1930-2), all of which have different creators and publishers. Both the c. 1925 map just noted and a 1937 map of the Beijing suburbs (BeijingSuburbs-baimeichu-1937) are noted as having been published by the Xidan Yinnan Construction Library, likely the same outfit that published the present map. This map is not listed among the holdings of any institution and is very scarce to the market, while the National Museum of Ethnology of Japan (国立民族学博物館) does have a 1943 edition of the map (Call No. AF1/292.2/ケンセ).