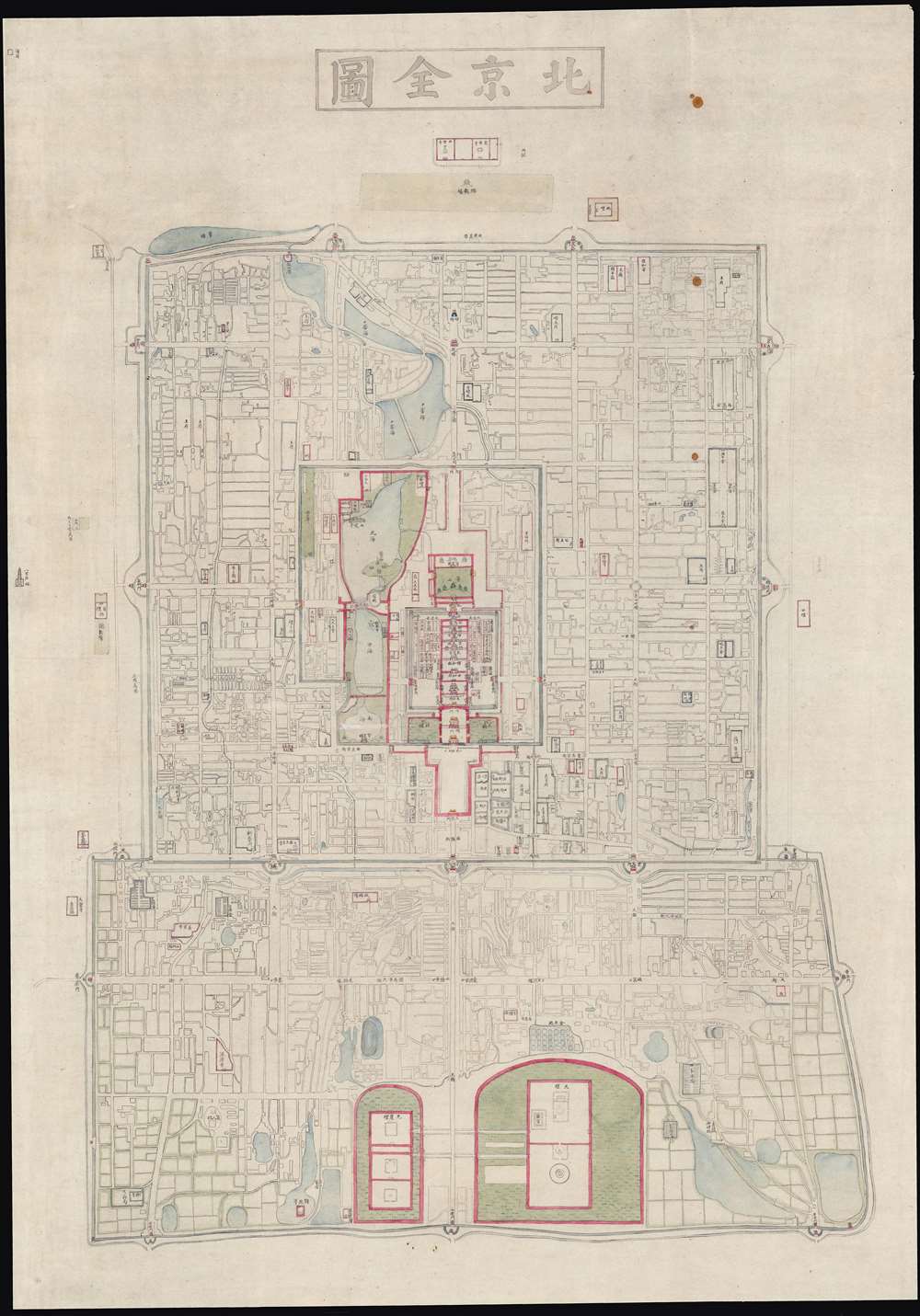 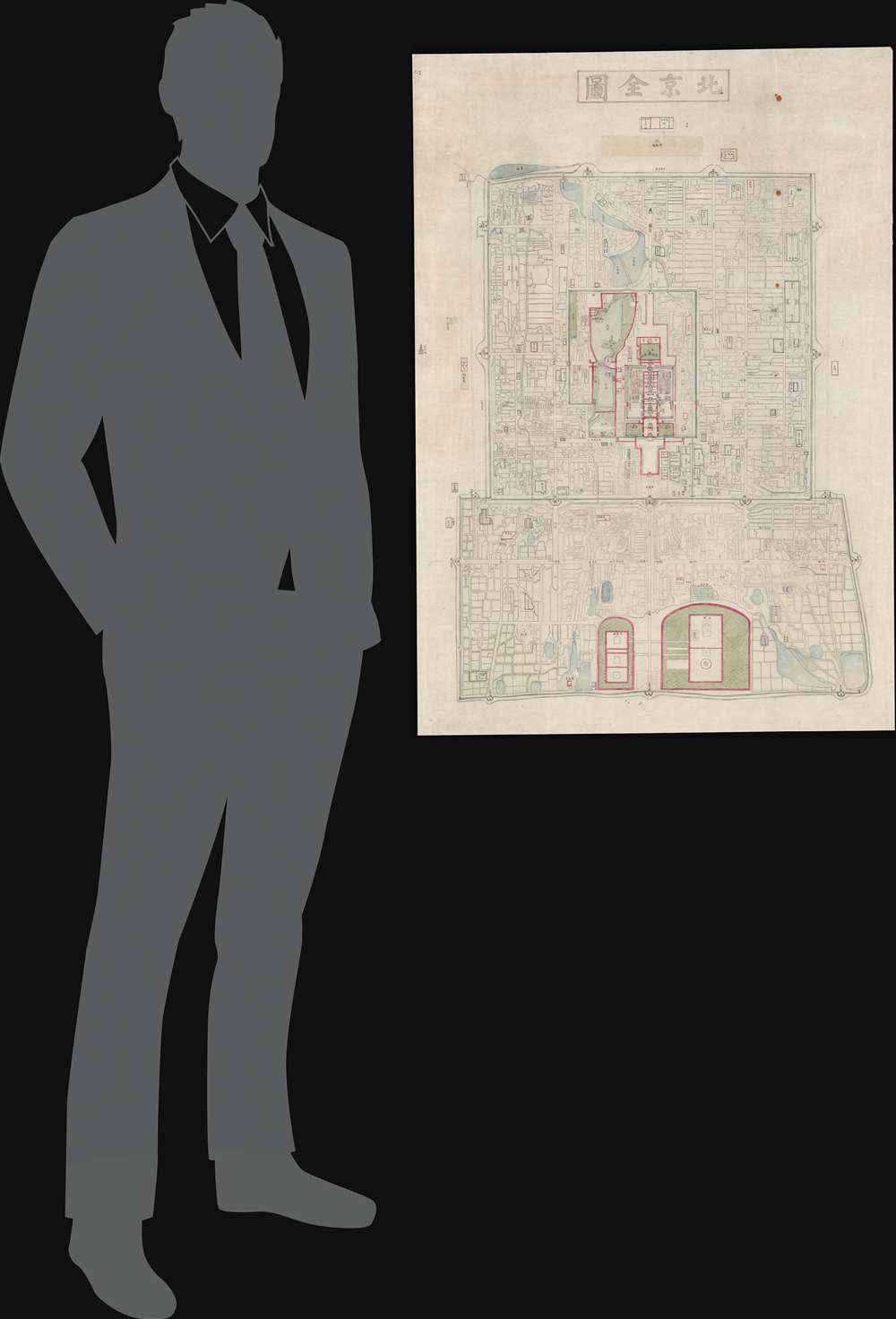 This is a very rare and meticulous manuscript map of Beijing from the 1860s, showing the inner and outer cities and noting a handful of sites outside the city walls. It notes important bureaucratic offices, temples, and other locations throughout the city, and is especially detailed in its cataloging of gates and structures inside the Forbidden City, as well as religious sites in and around Beijing.

As it developed under the Ming, Beijing was divided into three sections: the Forbidden City for the Emperor, his highest advisors, family members, and servants (itself actually divided into two main sections sometimes called the 'Palace City' and the 'Imperial City'); the inner city for high-level officials and advisors (in the Ming Dynasty these were often eunuchs and in the Qing this area was also reserved for relatives of the emperor and bannermen 旗人, the Qing military's elite fighters) and luxury markets that serviced them; and the outer city to the south, reserved for relatively low-level officials, merchants, and other non-elite members of the government and society. In reality, these divisions were not as strict as may appear at first glance, although access to the Forbidden City was indeed tightly restricted. The creator of this map was particularly diligent in noting the various structures, gates, lakes, and other features within the Forbidden City.

Like earlier imperial capitals in China and throughout East Asia, Beijing was built according to a combination of fengshui principles and bureaucratic rationality; thus, it is oriented towards the south with mountains to the back (north) and is basically geometric in design. In the last years of the Qing Dynasty at the start of the twentieth century, several neighborhoods were rebuilt and a railway station was added just outside Zhengyang Gate. The city would go through additional expansion and changes in the following decades, most notably during the early years of the People's Republic era, when most of the city walls were torn down for the construction of the Beijing subway and the 2nd Ring Road, which follows the course of the city walls. Many of the hutong (胡同) alleyways that defined old Beijing have likewise been replaced by modern urban development, though in recent years there has been a successful effort to have remaining hutong protected.

Beijing has gone through many name changes over its history. The area had been a seasonal capital of several kingdoms, including the Mongol Yuan Dynasty, when it was known as Khanbaliq or Dadu. But the city only became Beijing (meaning 'northern capital') in 1403, when the Ming Emperor Yongle moved the capital from Nanjing ('southern capital') to be closer to the front line of the Ming's ongoing war with the Mongols. Under the Ming, Beijing began to take on its modern form, with the Forbidden City, the city walls protecting and separating the inner and outer city, and many of the temples located throughout the city, including the Temple of Heaven (天壇) near the bottom-center. The Manchu Qing Dynasty elaborated the already-grandiose city that the Ming had built and added more palaces and parks to demonstrate their imperial splendor.

Qing Beijing and the World

Beijing in the Ming and Qing eras was a cultural magnet, incorporating influences from throughout China proper as well as from the Manchus, Mongols, and Chinese protectorates and vassal states like Tibet, Korea, and Annam, and even elements from Europe. Jesuit missionaries had arrived in Beijing in the early seventeenth century and were generally distrusted due to their foreign religion, but were allowed to stay, construct churches, and render services that the emperor and his advisors deemed useful. In particular, the Jesuits were great mathematicians, astronomers, cartographers, painters, musicians, translators, and manufacturers of mechanical devices like clocks. As a result of their presence, a number of churches were constructed in Beijing, including Nantang (center-left, marked 南天主堂, near Xuanwu Gate 宣武門), Beitang (北天主堂; just west of the Forbidden City, across Zhonghai 中海), Xitang (in the northwest of the city near Xizhi Gate 西直門), and St. Joseph's (東天主堂; also known as the East Church or Wangfujing Catholic Church, just east of the Forbidden City).

The Russian Orthodox Church also maintained an ecclesiastical mission, and members of the mission and other Russians (such as the Albazinian community) who died in Beijing were buried at a cemetery (俄國義塋) just north of the city wall, half-way between Desheng Gate (德勝門) and Anding Gate (nowadays, the site of the former cemetery is Qingnianhu Park 青年湖公園). To the west of the walled city were also a cemetery for the British (英國義塋) and the Jesuit Cemetery (南天主堂義塋) dating to the early seventeenth century.

Although the Ming and Qing had a number of institutions for handling foreign relations, including the Ministry of Rites (礼部), the Huitong Guan (會同舘), and Lifan Yuan (理藩院), all to the southeast of the Forbidden City, they did not have embassies, foreign missions, or a foreign ministry in the manner of Western powers. This changed after the second Opium War when the Qing were forced to create the Zongli Yamen (總理衙門; east of the Forbidden City) and allow foreign diplomats to reside in the inner city, which many did in what became known as the Legation Quarter (southeast of the Forbidden City). This quarter endured a weeks-long siege during the Boxer Uprising but held out until relieved by the forces of the Eight Nation Alliance.

This map is unusually exhaustive in noting religious sites throughout the city. The Qing went to great strides to court the Dalai Lama, Panchen Lama, and other leading figures in Tibetan Buddhism for both political and religious reasons. As a result, they constructed the beautiful Yonghe Temple 雍和宫 (top-right just east of Anding Gate 安定門), the Xihuang and Donghuang Temples (西黃寺, 東黃寺) north of the walled city, and several other temples. West of the walled city near the Xibian Gate (西便門) are the Daoist White Cloud Temple (白雲觀) and Buddhist Tianning Temple Pagoda (天寧寺). Aside from the Temple of Heaven, Temple of the Sun (日壇; east of the walled city), and a number of other temples related to the Emperor's duties as Son of Heaven, various temples were constructed to honor or propitiate ancient emperors and virtuous officials (such as the Temple of Past Emperors 帝王廟, near Fucheng Gate 阜成門, west of the Forbidden City). Curiously, neither the Ox Street Mosque (牛街礼拜寺; located in the southwest section of the outer city, just west of the Fayuan Temple 法源寺) nor any of the other dozen or so mosques that existed in Beijing at this time are noted, with the exception of a mosque (清真普宁寺) just south of Nanhai on West Chang'an Road near the Forbidden City which is vaguely indicated as a temple of worship (礼拜寺).

This map is very similar but not identical to a map of the same title held by the Library of Congress, which is dated to between 1861 and 1887, with Li Mingzhi (李明智) listed as the author. Another map held by Harvard University, titled Complete Geographic Map of Beijing (北京地理全圖), by Zhou Peichun (周培春), dated to 1865, is a more elaborated version of this map, suggesting that this map preceded it. At the same time, this map includes the, British, French, Russian, German, and American Legations to the southeast of the Forbidden City, not all of which were present until 1862, indicating that this map likely dates from between 1862 and 1865. No known history on the market.

Li Mingzhi (李明智; fl. c. 1861 - 1863) was a Chinese cartographer who made a map of Beijing (北京全圖) emphasizing bureaucratic offices, religious sites, and the structures within the Forbidden City. Learn More...

Very good. Evidence of repair after slight loss towards center of image. Trace stains in upper quarter of map.