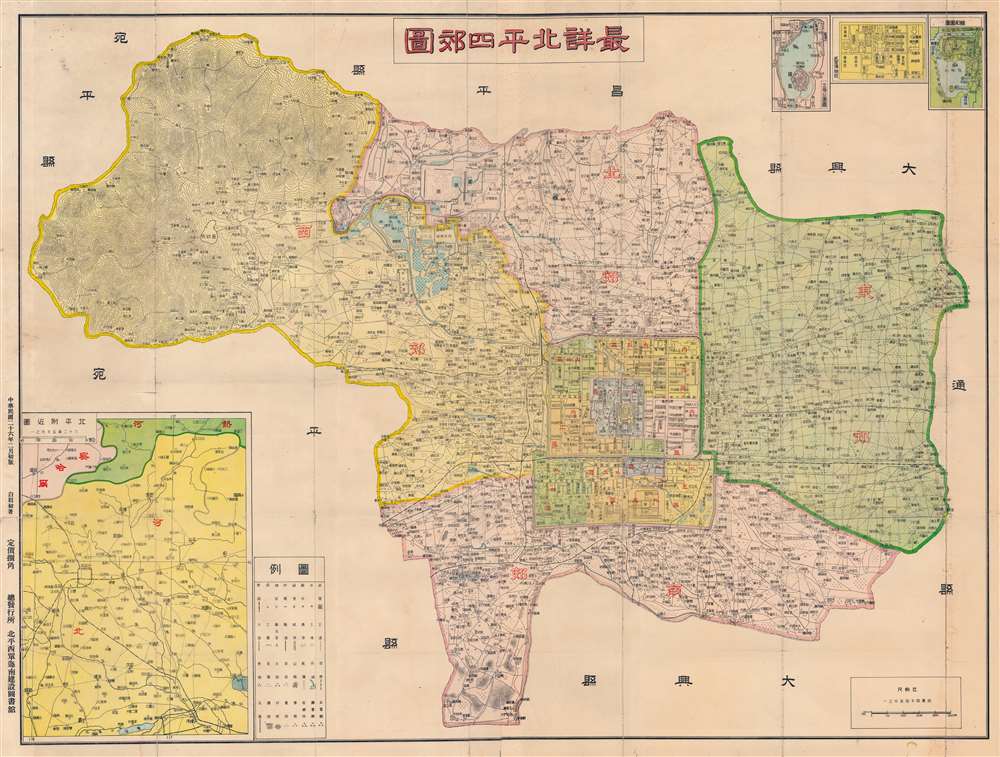 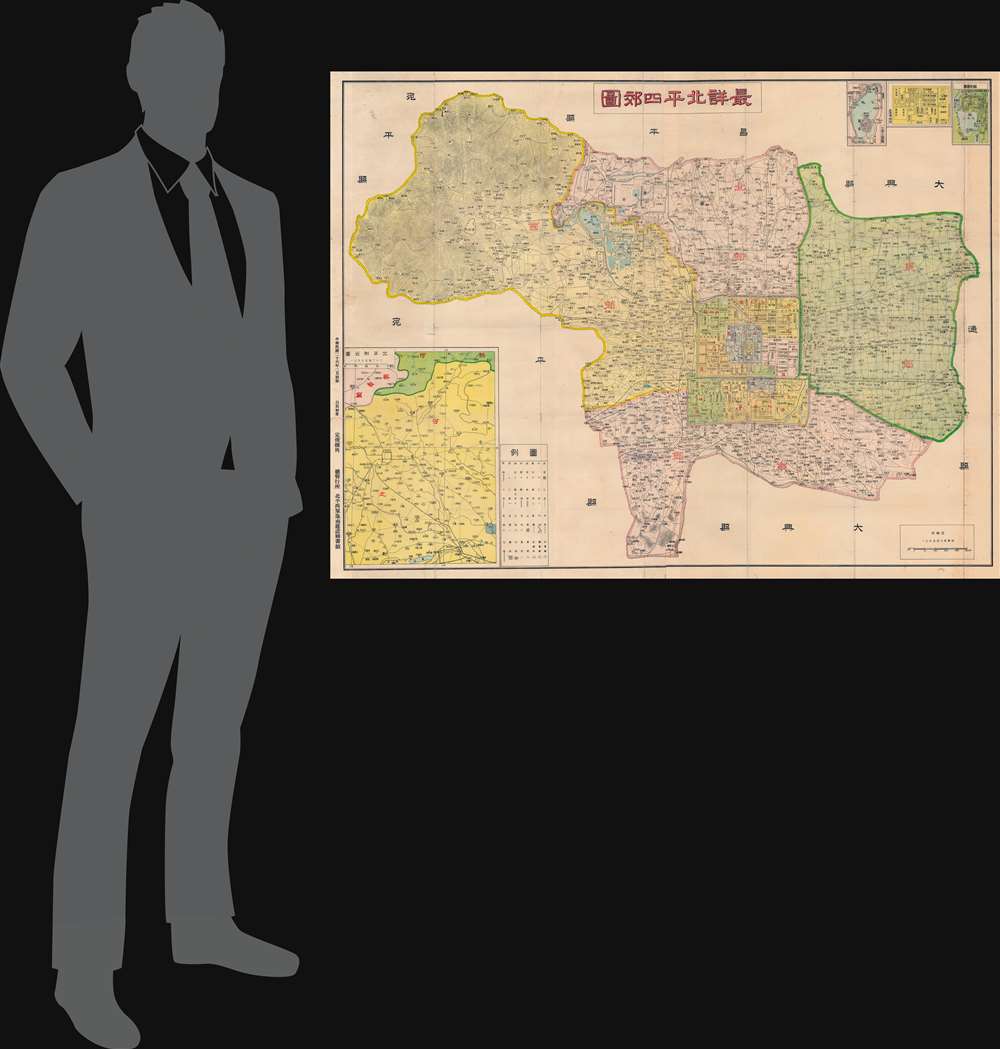 This is a very rare Bai Meichu (白眉) map of Beijing (Beiping) from 1937, just on the eve of the Second Sino-Japanese War (1937 - 1945). It shows the six inner and five outer districts of Beiping City (within the city walls) and its four suburbs, as well as the names of neighboring counties. It includes a large inset (scale 1 : 625000) of the Beijing vicinity including its borders with Chahar and Rehe. The map also has three small inset maps at top-right showing Beihai Park, the Forbidden City, and the Summer Palace, and a legend denoting symbols used to identify geographic features, infrastructure (roads, rail, bridges, walls), temples, pagodas, wells, and agriculture (orchards, tea, paddies, and fields).

The original owner has made a number of annotations in red, black, and blue pencil, mostly in the northern suburbs (北郊), starting near Deshengmen (德勝門), one of the city's main northern gates. The owner has traced a blue line to a nearby rail line, which follows the same route as today's Subway Line 13, near Qinghua Station (清華車站), and a number of Buddhist Temples, indicated by swastikas, have been marked in red and one has been circled at Liulongquan (九龍泉). There are also annotations in the inner and outer districts of Beiping city with red lines and circles, and Beichizi (北池子), just east of the Forbidden City, has been circled. Given the institution that produced this map, the owner was possibly involved in urban planning and construction at the sites marked.

Beijing has gone through many name changes. As capital of the Mongol Yuan Dynasty, it was known as Dadu. Beijing (meaning 'northern capital') came into use in 1403, when the Ming Emperor Yongle moved the capital from Nanjing ('southern capital') to be closer to the front line of the Ming's ongoing war with the Mongols. Under the Ming, Beijing began to take on its modern form, with the Forbidden City, the city walls protecting and separating the inner and outer city, and many of the temples. The Qing expanded and improved the already-grandiose Ming city. Beijing was initially the capital after the fall of the imperial dynasty and the transition to a republic, but it suffered a decline when the national capital was moved (back) to Nanjing by Chiang Kai-Shek in 1927-28. At this time, Beijing was renamed Beiping. The city was administratively reorganized into districts and suburbs with rational yet uninspiring names (District 1, District 2, North Suburb, West Suburb, etc.). Soon afterwards, in the mid-1930s, the Japanese military gradually approached the city in an on-again, off-again conflict with Chinese forces. One of these many skirmishes took place on July 7, 1937, soon after this map was produced, at the 'Marco Polo Bridge' at Lugouwiao 盧溝橋 (Wanping; 宛平), just to the southwest of the area here detailed. However, by this point, Chiang Kai-Shek had to bow to public opinion and, somewhat reluctantly, throw his armies into a full-scale war against the better trained and equipped Japanese. In retrospect, the 'Marco Polo Bridge Incident' is generally seen as the start of the Second Sino-Japanese War and World War II in Asia.

This is a first edition (初版), produced in February 1937 by the Bai Meichu (白眉初) for the Beiping Xidan Yinnan Construction Library (北平西單迤南建設圖書館). The map is rare. We note an single example at the The Capital Library of China in Beijing.

Good. Original fold lines and some edges reinforced on verso with archival tissue. Very minor infill at some fold intersections.
Looking for a high-resolution scan of this?