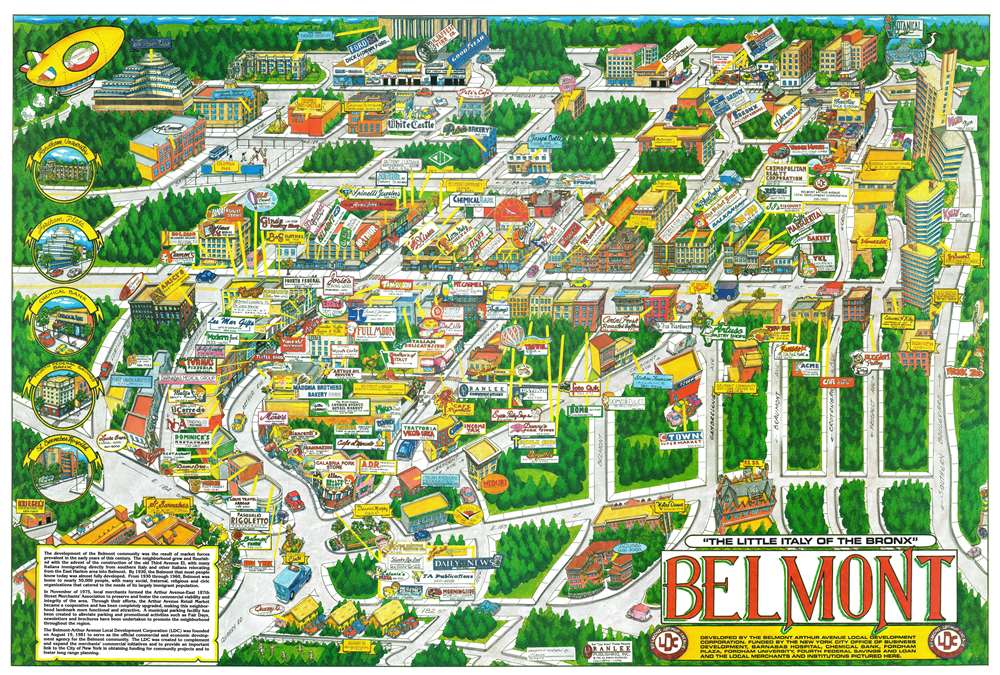 A brightly colored and charming pictorial map of the Belmont neighborhood in the Bronx, 'The Little Italy of the Bronx'.
$500.00

This is a 1986 Ranlee Publishing pictorial map of the Belmont, the Little Italy of the Bronx, New York City. The map depicts the neighborhood surrounding Arthur Avenue, between East Fordham Road and East 184th Street and between Bathgate Avenue and Bronx Park. Charmingly illustrated and created as an advertisement, local businesses throughout the neighborhood are promoted, complete with their logo and phone number. Pizza joints, restaurants, stores, salons, schools, car dealerships, and even funeral homes and churches are noted, capturing the neighborhood as it was for a moment in its history. Well-known landmarks, such as the Bronx Zoo (highlighted by a giraffe), the New York Botanical Garden, and Fordham University, are also illustrated. A short history of the neighborhood is included in the lower left corner.

This map was designed and illustrated by Carlos Saenz and published by Ranlee Publishing, Inc. in 1986. We have been unable to locate any other known examples.

Ranlee Publishing (1981 - 1988) was an American map publishing and printing company based in Englewood Cliffs, New Jersey. The company created 'commemorative town posters' based on the model that businesses would pay between $295 to $495 for advertising space. At its height, the company had branch offices in eleven cities. By 1988, however, the business was the defendant in a lawsuit brought by businesses in cities across the country that had never received the promised maps. According to an August 11, 1988, report by The Record of Hackensack, New Jersey, a lawsuit was filed in Superior Court in Hackensacck by the Bergen County Division of Consumer Affairs against the publishing company on behalf of 230 defrauded businesses, which included '119 in Wisconsin, 57 in Minnesota, and the rest scattered among Illinois, New York, Florida, California, Iowa, and Georgia. Learn More...

Very good. Light soiling on verso. Blank on verso.
Looking for a high-resolution scan of this?