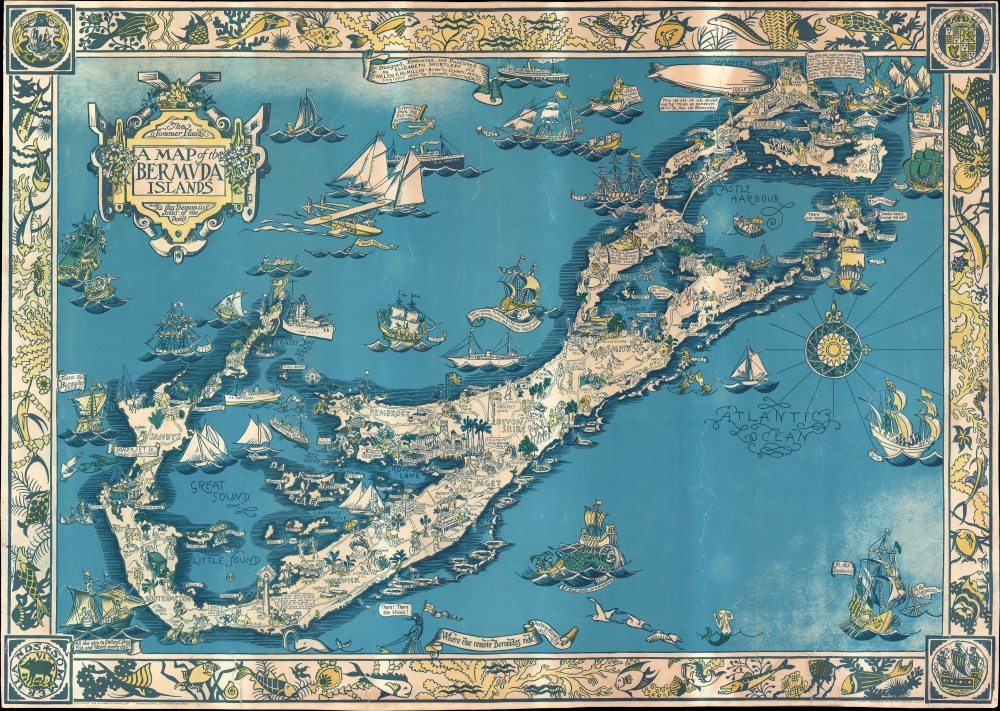 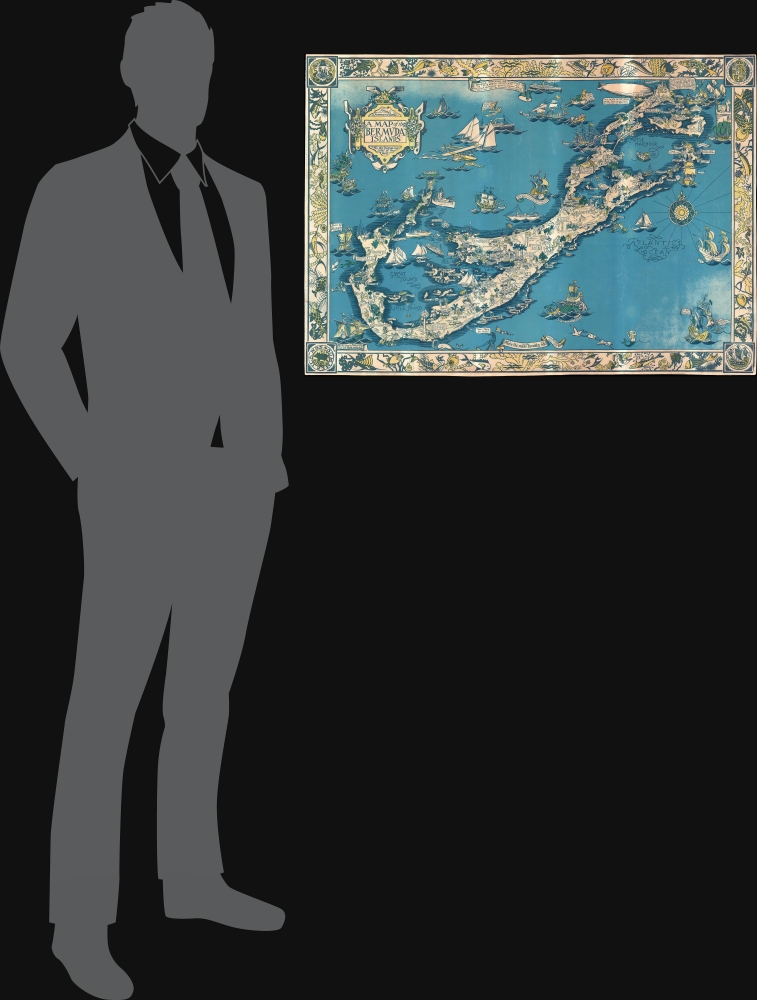 Stunning pictorial map by one of the great female pictorial cartographers.
$900.00

A stunning large format pictorial map of Bermuda issued in 1930 by a trio of female mapmakers based in Boston: Elizabeth Shurtleff, Helen F. McMillin, and her niece Elizabeth L. McMillin. The map covers all of Bermuda including the adjacent islands. Pictorial vignettes illustrating island flora, fauna, and social life fill the island and the whole is surrounded by a coral reef motif border.

Issued in 1930, this map appeared in the early days of the American pictorial map Golden Age. It was during this period, between 1920 and 1940, that women mapmakers began to rise to prominence. Among them Helen F. McMillin, Elizabeth L. McMillin, Alva Bennett Scott, and Ruth Taylor White, stand out as pioneers.

This map was designed and drawn by Elizabeth Shurtleff in 1930. The border is the work of Elizabeth L. McMillin. It was published jointly by Helen F. McMillin and Elizabeth Shurtleff and is one of the publications associated with their Boston based firm, Graphic History Association Publishers of Historical Maps. The printing was completed by Tudor Press of Boston. We note six examples in OCLC which are part of the collections at the Library of Congress, the Buffalo and Erie County Public Library, the University of Michigan, the University of Wisconsin Milwaukee, and Texas A and M University. Examples are also part of the Norman B. Leventhal Map Center at the Boston Public Library and the David Rumsey Map Collection.


Helen Frances McMillin (June 9, 1896 - June 6, 1987) was and American publisher, writer, editor, and illustrator active in the middle part of the 20th century. McMillin was born to a prominent family of North Adams, Massachusetts and attended Wellesley College, where she was editor of the Wellesley Legenda and Wellesley College News. =After graduating in 1917, she moved to Boston, where she worked as publisher of the Granite Monthly. She remained in until at least 1926, but in 1930 she was living in New York City where she worked at the Museum of Modern Art. We have had a difficult time assessing out her marriage situation based upon announcements published in the North Adams Transcript. In 1921 there was an announcement of her engagement to Royal Stuart Steiner of Wisconsin, an economics professor. Another announcement appeared in 1930, to Richard G. Francois of New York. A third appears to suggest she married Royal Stewart Van de Woestyne (1892 - 1967), a Knox College economic professor, in 1933. Based upon ancestry research, it appears that Steiner and Van de Woestyne are one in the same, and so a name change may have occurred, for unclear reasons. She is the aunt of another important female pictorial map mapmaker and artist, Elisabeth L. McMillin (1909 - 19??). Together with Helen F. McMillin, Shurtleff headed the Boston based Graphic History Association Publishers of Historical Maps, which published several important pictorial maps between 1926 and 1936. Helen died in Hamilton, Ohio. Learn More...


Elizabeth L. McMillin (1909 - 19??) was and American publisher and illustrator active in the middle part of the 20th century. McMillan was born to a prominent family of North Adams, Massachusetts and attended Wellesley College. She frequently collaborated with Elizabeth Shurtleff, her aunt Helen F. McMillin, and fellow Wellesley Alum, Alva Bennett Scott. These women were at the forefront of a new generation of female mapmakers emerging in the mid-20th century. Learn More...

Good. Backed with archival tissue. Some minor discoloration and a couple of repaired separations.