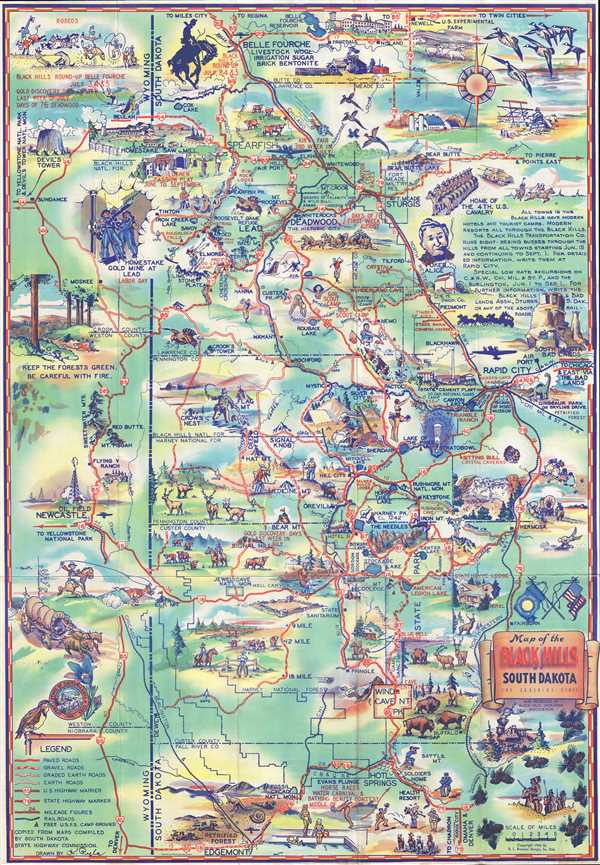 A wonderful pictorial tourist map of the Black Hills that features illustrations of stagecoaches, cowboys, and bison.

This is a 1940 K. Pyle pictorial map of the Black Hills, a small isolated mountain range located in western South Dakota and eastern Wyoming. The map depicts the region from Sundance, Wyoming to Rapid City, South Dakota and from Belle Fourche, South Dakota to Edgemont, South Dakota. National parks, national forests, state parks, mountains, lakes, and other points of interest are all illustrated and labeled. Vignettes throughout juxtapose the Old West and the modern, placing illustrations of Mt. Rushmore, cowboys, prospectors, and stagecoaches next to steam engines, airplanes, and race cars. Cities and towns are labeled as well, including Deadwood, Belle Fourche, Rapid City, Sturgis and numerous others. Illustrations of wildlife help populate the map as well, such as elk, bison, deer, and bears.

A fantastic piece for people visiting the region, major U.S. and state highways are shown in red, making them easy to trace, and road grades are also indicated. Railroads throughout the region are illustrated and labeled, allowing people planning a trip to know where the rail lines are located. Smaller museums, lodges, motels, and other locations that tourists may want to know about are also labeled, though little information is given about them. Events taking place throughout the Black Hills are also noted (all of which are in red block letters), including the Gold Discovery Days in July in Signal Hill, the 'Days of '76' during the first week in August in Deadwood, and the Key City Rodeo during Labor Day weekend in Sturgis.

This map was drawn by K. Pyle and published by the Black Hills and Bad Lands Association in 1940.

Very good. Light wear along original fold lines. Printed photographs and text on verso.
Looking for a high-resolution scan of this?