1780 Frentzel Map of Northern Bohemia (War of the Bavarian Succession) 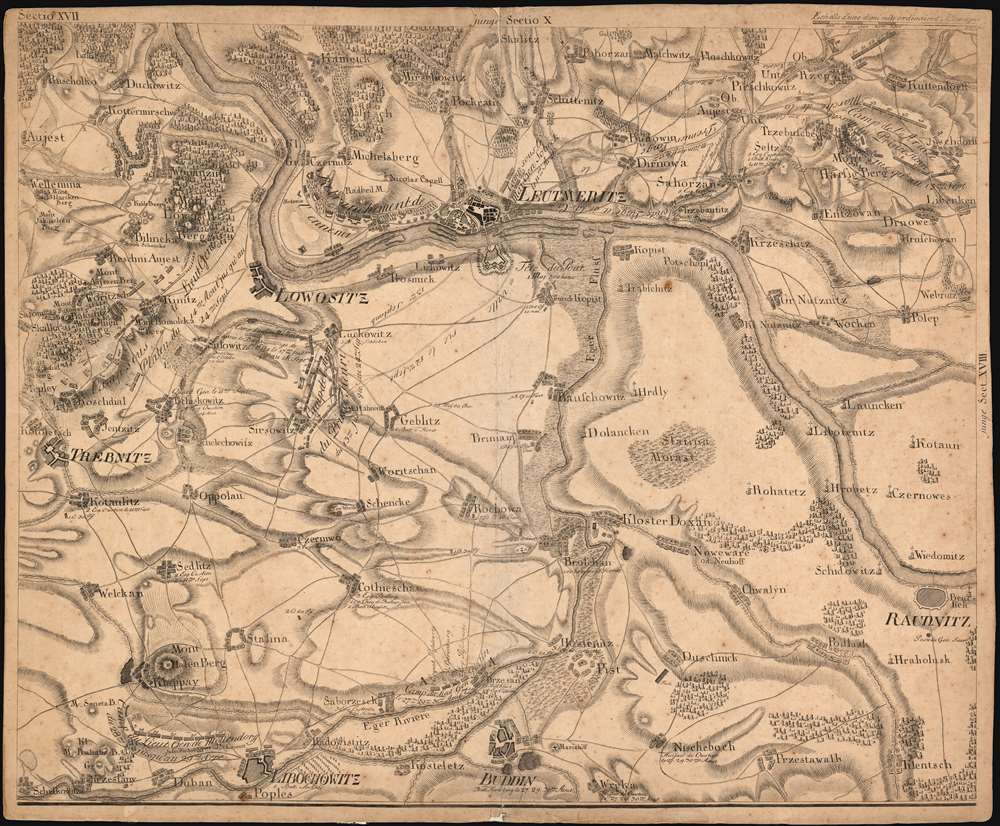 1780 Frentzel Map of Northern Bohemia (War of the Bavarian Succession)

A unique challenge to the motivated collector.
$550.00

This is a 1780 Georg Friedrich Jonas Frentzel map of a portion of Northern Bohemia, recording the positions of armies during the course of the War of the Bavarian Succession (1778 - 1779). The map shows a portion of what is now the Czech Republic, north of Prague at juncture of the River Elbe and the Eger River (more commonly known as the Ohre). It includes the cities of Roudnice, Litomerice, Lovosice, Trebenice, Budyne and Libochovice, as well as many villages. Topography is shown with hachure; forests are shown pictorially. The positions of belligerents are noted, naming the commanders of the armies in many cases, with their positions dated to indicate changes. The movements of the armies under Prince Henry of Prussia, led by Lieutenant Generals Friedrich von Platen and Wichard Joachim Heinrich von Möllendorf, are shown in dates of August and September of 1778. The Austrian positions, commanding the heights west of Litomerice, are simply marked 'Retrenchment de l'ennemi', marking this map's creator as a supporter of the Prussian cause. (Frentzel was a Saxon.)

The War of the Bavarian Succession

Fought between Austria on the one hand and a coalition of Prussia, Saxony and Bavaria on the other, this was the last of the so-called 'Cabinet Wars,' or 'wars between princes.' Such wars were a product of the Age of Enlightenment, and were marked by their limited goals and - relatively speaking - limited horror, as compared with conflicts driven by nationalism or religion. Even as armies maneuvered in the field, diplomats shuttled between capitals in an effort to resolve their monarchs' complaints. In the case of the War of the Bavarian Succession, there were only a handful of actual skirmishes despite more than three hundred soldiers being fielded. Unfortunately, the feeding and care of the eighteenth-century army depended largely on soldiers foraging for themselves. Consequently, the vast majority of the twenty-thousand-odd casualties was due to disease and starvation. The prosecution of the war was characterized by its soldiers' - and the local civilians' - desperate attempts to eat. Consequently, the war was referred to in Prussia and Saxony as Kartoffelkrieg, and in Austria as Zwetschgenrummel... 'Potato War' and 'Plum Fuss,' respectively. Despite being spurred by the death without heir of the Elector of Bavaria, the action of the war (such as it was) actually took place in Saxony and Bohemia.

Georg Friedrich Jonas Frentzel (1754 - 1799) was a German master engraver from Leipzig. Nothing is published about his early life and education, but his surviving work is superbly detailed and well-executed. He is best known for having engraved one of the finest maps of Boston to be produced in the Revolutionary War period, his 1776 Carte von dem Hafen und der Stadt Boston; he also produced polar projections showing Cook's discoveries in the Pacific Ocean, and a monumental 20-sheet map of Bohemia and Saxony tracing the maneuvers of the War of the Bavarian Succession. All of Frentzel's work is rare on the market. Learn More...