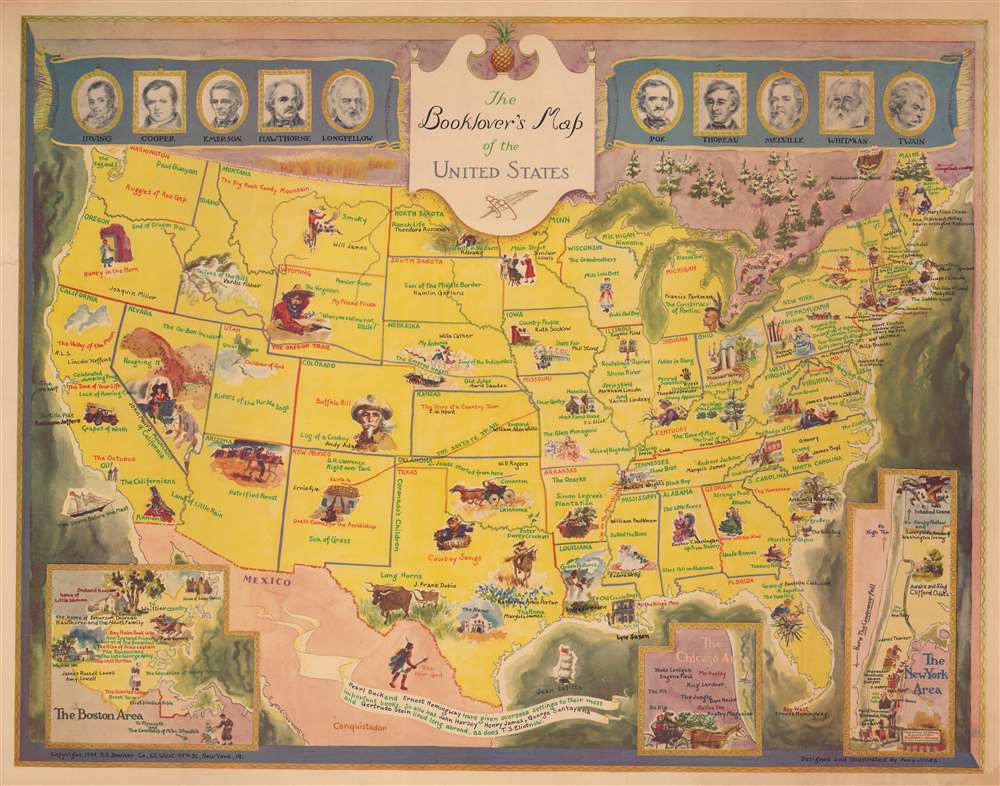 This is a 1949 Amy Jones pictorial literary map of the United States. Book titles appear across the country, with at least one in each state, including Gone with the Wind, Walden, My Ántonia, and Main Street. Authors are also referenced throughout, such as William Faulkner, Ernest Hemingway, Emily Dickinson, and Robert Frost. Pictorial vignettes are scattered throughout as well, illustrating scenes and characters from many of the referenced works. Three insets are situated along the bottom border and focus on the 'New York Area', the 'Chicago Area', and the 'Boston Area'. Portraits of ten authors flank the title cartouche and include depictions of Irving, Longfellow, Poe, and Twain.

Amy Jones (April 4, 1899 - October 8, 1992) was an American artist and muralist. Born in Buffalo, New York, as Amy A. White, her father died early in her life and by 1910 she and her mother were living in Brooklyn, New York. Jones attended Erasmus Hall High School and graduated in 1918 and then attended the Pratt Institute on scholarship and studied art. Jones spent two years at Pratt before going to the Albright Art Gallery in Buffalo, New York. Between 1920 and 1930, Jones studied with Cecil Chichester in Woodstock, New York; Henry Hensche in Provincetown, Massachusetts; Wayman Adams in Elizabethtown, New York; and Anthony di Bona in Saranac Lake, New York. The Buffalo Society of Arts awarded Jones a fellowship in 1930, and she and her husband moved to Saranac Lake, where her husband was a tubercular patient in a nursing home. Jones was awarded her first commission in 1937 after submitting a triptych for one of the Treasury Department's mural competitions. This contract was for the post office mural in Winsted, New York, which she completed in 1938. Then, she earned a second commission for a mural for the post office in Painted Post, New York, in 1939. A third post office mural, this time in Scotia, New York, was completed in 1941. She and her husband left Saranac Lake in 1943 and moved to Mount Kisco, New York, where she lived for nearly forty years. Over the course of her career, Jones exhibited work throughout the United States and Europe and many of per paintings are part of institutional and private collections. In addition to being a talented watercolorist and muralist, Jones also succeeded as a commercial artist and illustrator. Jones married her first husband, David Blair Jones, in 1920, and he passed away in 1955. Then, she married Owen Phelps Frisbie in 1961 and he died on June 12, 1963. Jones continued working throughout the 1970s and 1980s, with exhibitions of her work shown in Venice and Padua, Italy; Kingston, Jamaica; and several galleries and museums in New York. She moved to Escondido, California, in 1986 to be closer to her daughter. Learn More...