1819 Hales and Melish Map of Boston and Vicinity 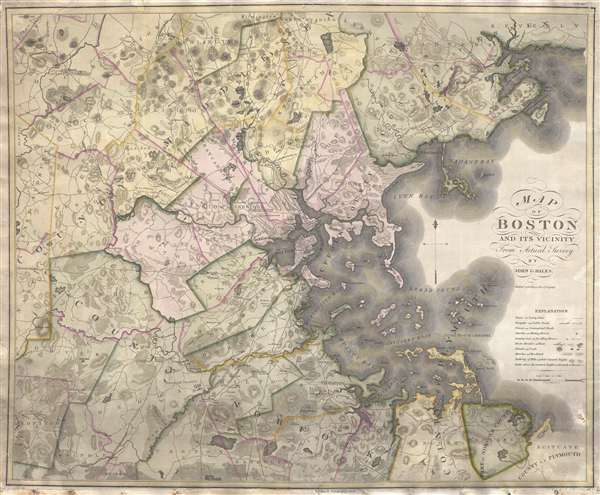 1819 Hales and Melish Map of Boston and Vicinity

The first large scale trigonometric survey of the Boston vicinity since Des Barres.

This map has the distinction of being the first American map of large area to be based upon sophisticated European style trigonometric surveys – in this case conducted by Hales himself! It is also the first large scale map of the greater Boston area. The result is a vast improvement over the typical error-prone rod and chain style surveying common in New England prior to Hale's work.

A solicitation for this work appeared in the June 7, 1819 edition of the Boston Gazette,

every Road and River is regularly laid down from lineal Measure, on a Scale of one mile to the inch; the angles mathematically protracted; the summit height of the principal Hills ascertained from Trigonometrical observation.

This map was engraved by Edwin Gillingham. It was initially published in 1919, as here, jointly by Hales and the iconic map publisher John Melish. A second edition, without the Melish imprint, was issued by Hales exclusive in 1820. There are editions published in 1919 (present example, first edition), 1820, and 1829, as well as a posthumous edition issued in 1833.

John Groves Hales (1785 – May 20, 1832) was a cartographer, civil engineer, and surveyor active in Massachusetts in the early part of the 19th century. He is considered by some to be one of the most influential and important New England cartographers of the early 19th century. He was born in England around 1785 and there trained as a civil engineer. He was employed on an embankment and diking project in Somerset, England between 1803 and 1806. Around 1810 Hales emigrated to the Portsmouth, New Hampshire where he took on various surveying projects, but private and public. He also began surveying New England cities and towns using advanced and highly accurate European style trigonometric techniques – a sharp contract to the rod and chain system more commonly used in the United States at the time. His first major cartographic work in the United States is an 1812 map of Portsmouth, New Hampshire. Around 1813 he relocated to Boston, Massachusetts. In 1814 he issued a large-scale map of Boston – the most detailed such map to date. Around 1819, he jointly published, with John Melish, the first trigonometric map of the vicinity of Boston. In that same year, he was commissioned by the City of Boston to produce a vast large scale map of Boston, the manuscripts for which survive in the Boston city records. Unfortunately the massive map itself was not published in Hales' lifetime. Hales luck turned sour when, in 1823 he was convicted of forgery and sentenced to 3 years of incarceration. It is unclear if he served time or not, for in 1825 he published a highly detailed map of Essex. He remained a highly active surveyor and mapmaker, with some 45 town planes to his name, until his death in 1832. Hales is buried in the St. Matthews Episcopal Church in South Boston.


John Melish (June 13, 1771-1822) was an early 19th century American writer, publisher and mapmaker based at 209 Chestnut Street, Philadelphia. Many historians consider John Melish to be the first truly great American commercial cartographer and responsible for some of the most influential maps in the history of North America. Melish was born in Scotland in 1771. As a young man he apprenticed to a Glasgow cotton merchant and in this capacity visited America no less than four times between 1798 and 1809. In 1806 Melish attempted to create his own cotton important-export company based in Glasgow, Scotland and Savannah, Georgia. Unfortunately, deteriorating relations between the United States and Great Britain resulted in the 1807 trade embargo, which all but destroyed Melish's fledgling company. In 1811 Melish finally left Scotland to permanently relocate in Philadelphia. Melish had never been truly satisfied with the quality of travel writing available regarding the new republic and so, in 1812, published his own contribution to the genre. Melish based his first major publication, the cartographically rich, Travels in the United States of America in the Years 1806 & 1807, and 1809, 1810 and 1811, on the copious notes taken during his own travels as a cotton merchant. Travels enjoyed an immediate success and even caught the eye of Thomas Jefferson, then President, who sent copies of the work to friends in France and Italy. Partially in an attempt to illustrate his own travels and partly in response to a general need for good cartographic materials, Melish turned to map publishing. By 1814 his was styling himself as a "Geographer and Map Seller" and had published several independent maps, geographies and gazetteers. Melish's most important work is most likely his iconic representation of the United States first published in 1816, Map of the United States with the contiguous British and Spanish Possessions. This visionary large format map was the first American commercial map to show the United States extending from coast-to-coast in a remarkably prescient expression of the Doctrine of Manifest Destiny. Melish died suddenly of unknown causes in December of 1822. He is buried in Philadelphia. (Carter, E. C., Surveying the Record, pages 40 - 49. Ristow, W., American Maps and Map Makers, pages 110-115. 143, 154, 166-168, 191, 246, 281, 446. Wolfgang, M.E., "John Melish: An Early American Demographer." Pennsylvania Magazine 82 (1958): pages 65-81.)