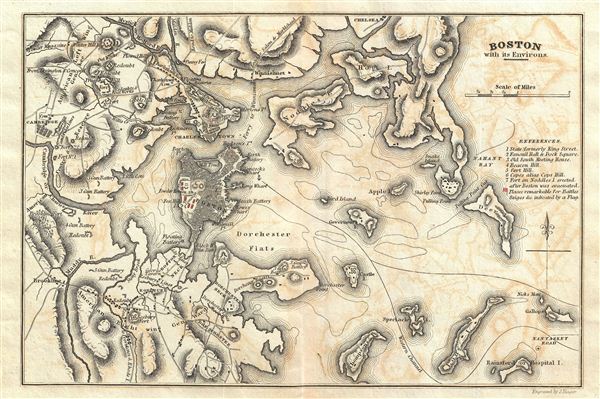 The Siege of Boston and the Battle of Bunker Hill.

This is a rare plan or map of Boston, Massachusetts during the American Revolutionary War issued for John Marshall's 1832 edition of the Life of Washington. The map covers the strategically important city and harbor of Boston, including the surrounding region of Charleston, Brookline, Cambridge, Medford, Dorchester, and Roxbury. Various rivers, roads, and topographical elements are noted. Color coding indicates the positions of the British (Red) and Continental (Blue) forces as each attempted to maintain control of the region.

Marshall prepared this map to illustrate the Siege of Boston and the Battle of Bunker Hill. At the opening of the Revolutionary War the British were firmly entrenched in Boston where they maintained a large military presence. The Continental Militia, keen to dive the British out Boston following their victories at the Battles of Lexington and Concord, laid siege to the then peninsular city. In 1775, the British sized the fortified Continental positions at Bunker and Breeds Hill in the famous Battle of Bunker Hill. Though the British were successful in taking the position, heavy casualties ultimately convinced the British Major General William Howe to withdraw his forces Howe later regrouped and sized control of New York City, which he held until the end of the Revolutionary War.