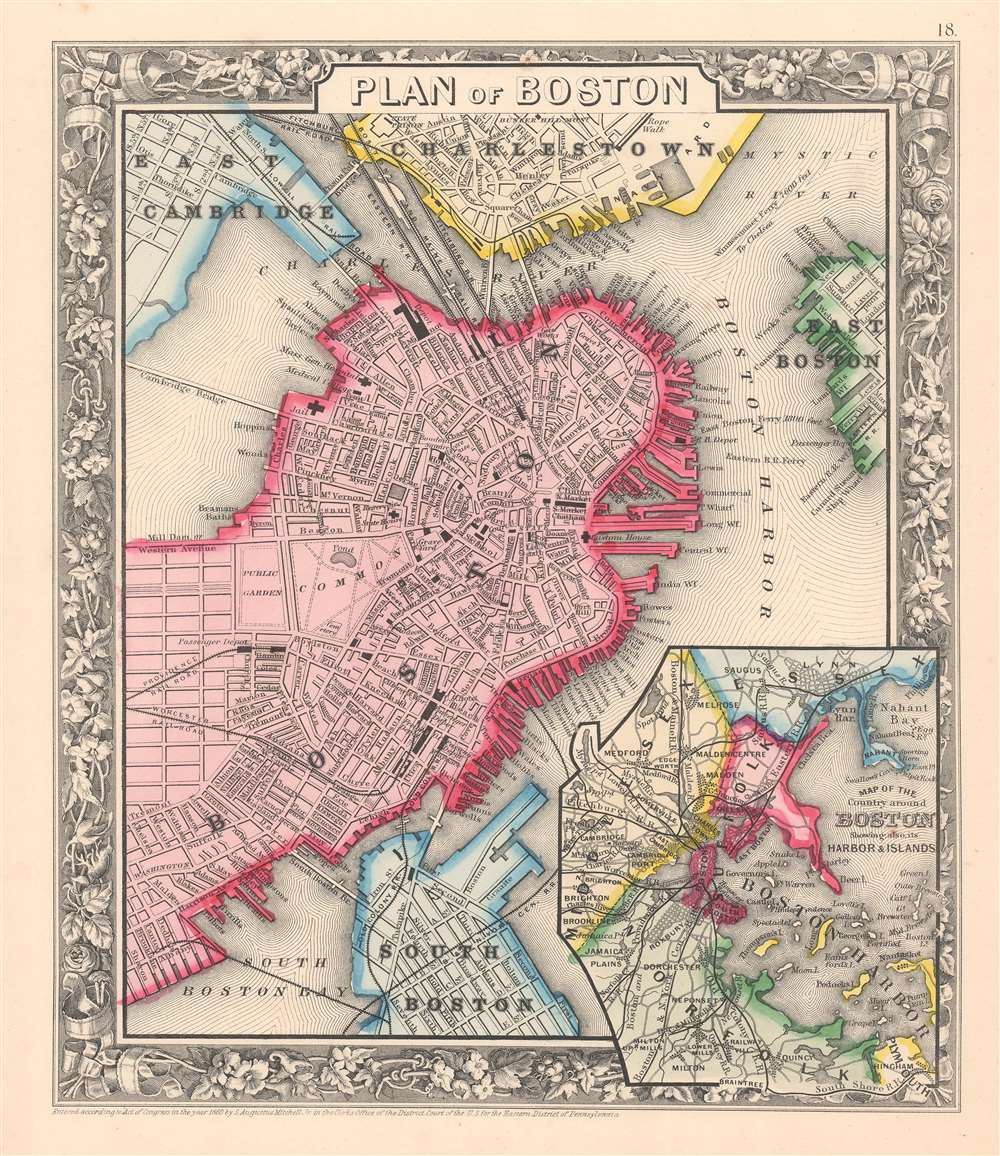 One of the more attractive 19th century commercial atlas maps of Boston.
$275.00

This is an 1862 Samuel Augustus Mitchell, Jr. map of Boston, Massachusetts. The map depicts Boston along with parts of East Cambridge, Charlestown, East Boston, and South Boston. Parks, individual streets, trains, piers, ferries, and important buildings are all illustrated and labeled. An inset in the lower right depicts Boston Harbor and the greater Boston area. The whole is surrounded by the attractive floral border common to Mitchell atlases between 1860 and 1865. Mitchell's Boston is one of the more attractive atlas maps of the city to appear in the mid 19th century.

Mitchell's Changes to the Plan of Boston

This map was prepared by S. A. Mitchell Jr. for inclusion in the 1862 edition of Mitchell's New General Atlas. Like many American map publishers of this period, Mitchell did not regularly update his copyrights, consequently this map is dated and copyrighted to 1860: 'Entered according to Act of Congress in the Year 1860 by S. Augustus Mitchell Jr. in the Clerk's Office of the District Court of the U.S. for the Eastern District of Pennsylvania.' The 1862 edition of Mitchell's New General Atlas is well represented in institutional collections.

Mitchell, S. A., Mitchell's New General Atlas Containing Maps of the Various Countries of the World, Plans of Cities, Etc., embraced in Forty-Seven Quarto Maps, Forming a series of Seventy-Six Maps and Plans, together with Valuable Statistical Tables (Philadelphia: S. Augustus Mitchell, Jr.) 1862.     Mitchell's New General Atlas was published by Samuel Augustus Mitchell, Jr., the son of the prolific cartographer Samuel Augustus Mitchell. Many of the plates are derived from the his father's Mitchell's Universal Atlas, but not directly. The Mitchell's Universal Atlas was initially sold to Thomas, Cowperthwait, and Company in 1849, and again to Charles Deliver in 1856. It was Deliver who introduced the new vibrant color scheme, abandoning the older Mitchell's Universal Atlas green borders and themes for bright reds, blues, and yellows. Samuel Augustus Mitchell, Jr. acquired the Deliver plates in 1859. He added his own floral motif border, but doubled down on the vibrant color scheme, thus introducing to the American public the most vividly colored American atlas of the 19th century. In 1860, he published the first edition of his New General Atlas and, despite a slump in sales during the American Civil War, attained a level of success to rival his father. Mitchell would continue to publish the New General Atlas until 1887, when the firm formally closed.