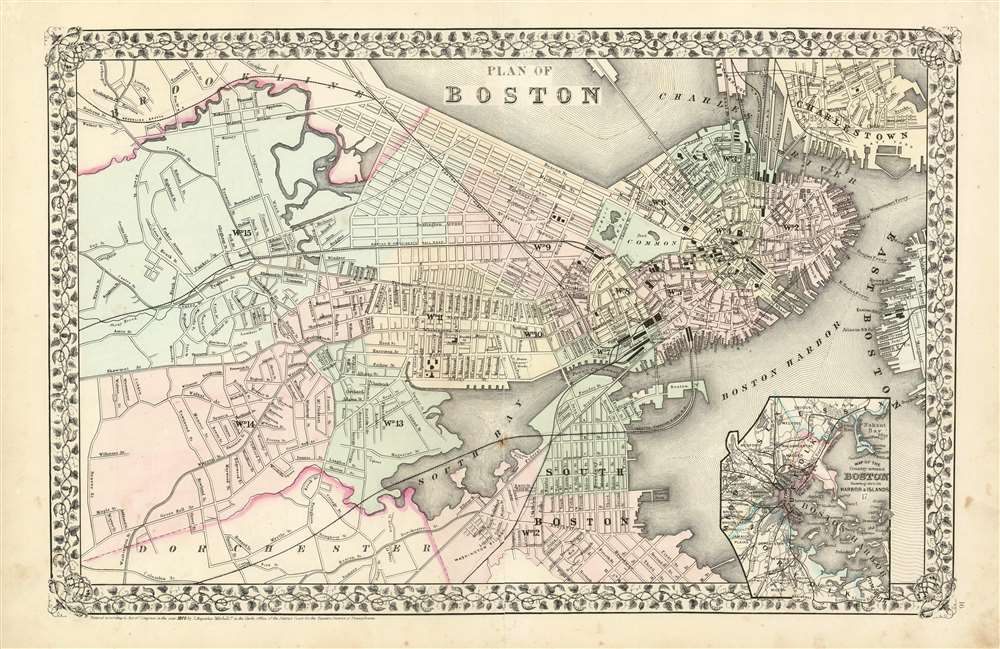 Chronicling the Expansion of Boston into its Suburbs

A beautiful example of S. A. Mitchell Jr.'s newly-expanded 1870 map of Boston, Massachusetts. While Mitchell's 1860's plans of Boston extend only as far west as Dartmouth Street, this new map covers as far west as Brookline and as far south as Dorchester. The map is sharply detailed, with special focus on railroads and terminal buildings. Some prospective streets - Atlantic Avenue, in particular - are shown, prior to the placement of the landfill on which the street would be built. An inset in the lower right quadrant depicts Boston Harbor and the surrounding counties of Essex, Middlesex and Nortfolk . Features the vine motif border typical of Mitchell maps from the 1866 - 1882 period.

Prepared by S. A. Mitchell for inclusion as plate no. 16 in the 1870 issue of Mitchell's New General Atlas. Dated and copyrighted, 'Entered according to Act of Congress in the Year 1870 by S. A. Mitchell in the Office of the Librarian of Congress at Washington.' While various editions of this map are not uncommon on the market, this edition appears to be scarce; only two examples are listed in institutional collections by OCLC.