1905 Walker Map or Plan of the City of Boston, Massachusetts 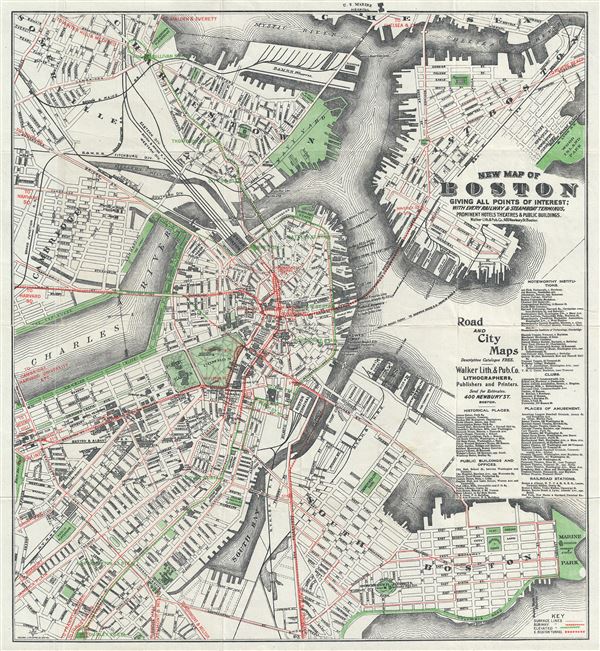 1905 Walker Map or Plan of the City of Boston, Massachusetts

This is a beautiful 1905 map or plan of the city of Boston, Massachusetts by the Walker Lithograph and Publishing Company. It covers the city of Boston from Charlestown and Somerville to Marine Park and Old Harbor. Individual streets, important buildings, neighborhoods, parks, piers, railway and ferry lines, subway lines and other topographical features are identified. An index of historical places, public buildings and offices, noteworthy institutions, clubs, places of amusement and railroad stations is included along the right margin.

Though undated, the development of the East Boston Tunnel suggests that this map was created in 1905. The East Boston Tunnel opened in 1904, making it the first subway in the world to run under a section of the ocean. The Atlantic Station, opened in 1906, is not marked on this map, suggesting that this map was created between 1904 and 1906. This map was issued by the Walker Lithograph and Publishing Co., 400 Newbury St., Boston.

Very good. Minor wear along original fold lines. Professionally flattened and backed with archival tissue. Accompanied by original cover.
Looking for a high-resolution scan of this?