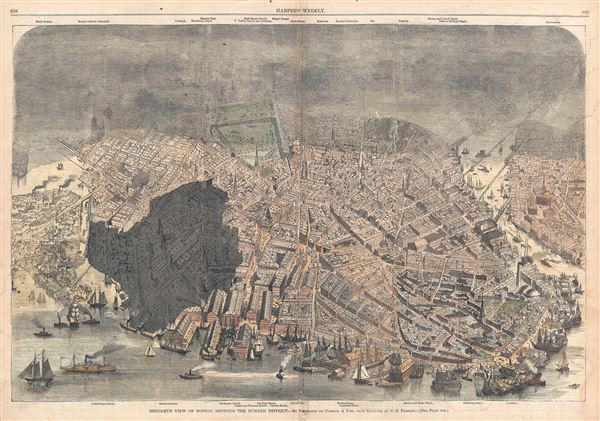 The first view to illustrate the devastation following the Great Boston Fire of 1872.

A dramatic journalistic view of Boston, Massachusetts prepared to illustrate the devastation following the Great Boston Fire of 1872. Issued just three weeks after the tragic fire (November 7-8, 1872), this is one of the first publications to illustrate the full extent of the fire. Eager to provide their readers with a graphic representation of the fire, the publishers of Harper's Weekly turned to Currier and Ives, who had contracted illustrator Charles R. Parsons to collect material to produce a grand view of the city. Parson's was in a unique position as he worked for both Harper's Weekly, as head of their art department, and Currier and Ives, and was thus able to consolidate the resources of both firms to produce this urgent view. Hence the present view, published by Harper's Weekly, thus actually predates the famous grand format Currier and Ives view issued one year later in 1873. Moreover, it is considerably advanced over the Currier and Ives View as it illustrates the results of the Great Fire, which the later view disregards.