1930 Wallingford Map: A Bostonian's View of the United States 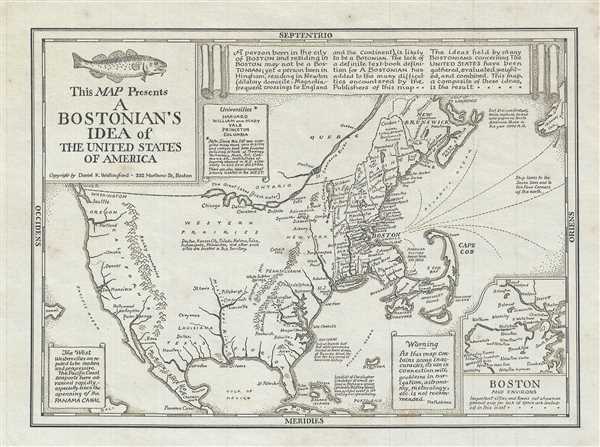 1930 Wallingford Map: A Bostonian's View of the United States

This is a reduced edition of Wallingford’s 1936 humorous aggregate cognitive map 'Bostonian's View of the United States of America.' The map pokes fun at the stereotypical provincially minded Bostonian, who knows and cares little about the world outside of the narrow confines of New England in general and Boston in specific. Cape Cod and Boston are grossly oversized while other parts of the country are greatly reduced. Much of the country west of Connecticut is deeply disproportionate with the exception of popular vacation spots like Las Vegas, Hawaii, and even Tahiti. Amusing notes annotate the map:

The West: Western cities are reputed to be modern and progressive.

The Pacific Coast seaports have advanced rapidly, especially since the opening of the panama Canal.. Wallingford originally issued this map c. 1935 following his move from Chicago to Boston. The present example is a later reissue.

Very good. Minor overall toning and foxing.
Looking for a high-resolution scan of this?