1945 Anderson and Clement Railroad Map of the Northeastern United States 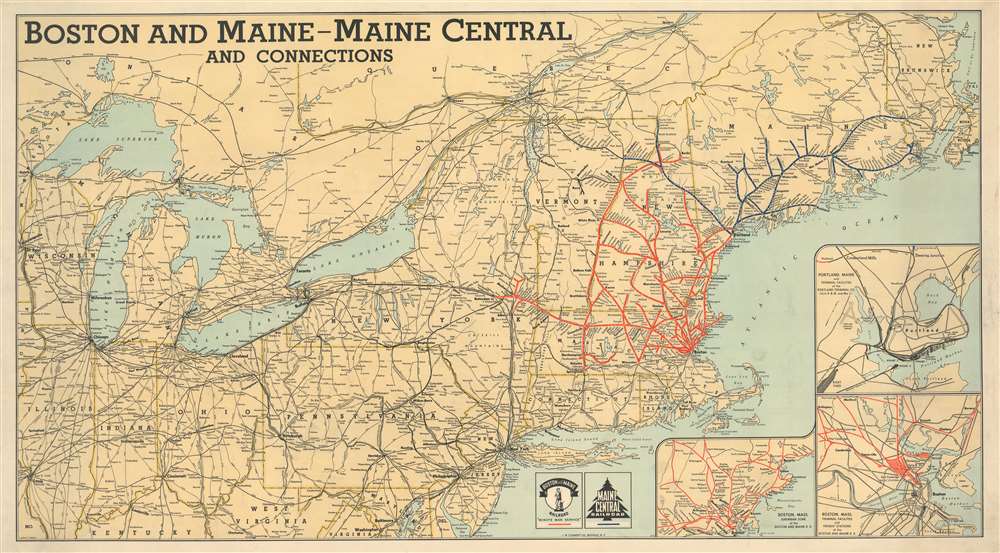 1945 Anderson and Clement Railroad Map of the Northeastern United States

Details the railroad networks of the Boston and Maine Railroad and the Maine Central Railroad.
$1,000.00

This is a 1945 Crawford C. Anderson and J. W. Clement Company railroad map of the northeastern United States. Created for the Boston and Maine Railroad and the Maine Central Railroad, the map boldly highlights both rail networks. Red lines follow the routes of the Boston and Maine, while dark blue traces the Maine Central. White dots mark stops along both networks, and all stops are labeled. Connecting rail networks, including the Bangor and Aroostook Railroad, New York Central, and Pennsylvania Railroad, are illustrated by black lines and identified using abbreviations. Insets situated in the lower right corner focus on the Boston and Maine Railroad's network in Boston and the Boston region, along with the rail network in Portland, Maine.

This map was drawn by Crawford C. Anderson and published by the J. W. Clement Company in 1945. We are aware of one other surviving example, which is part of the collection at the Osher Map Library at the University of Southern Maine.

The J. W. Clement Company (1908 - 19xx) was an American printing and publishing firm based in Buffalo, New York. Founded in 1908 by Helen C. Springer, David L. Johnston, and Gustave Hornung, the firm eventually grew to become one of the largest printing and publishing firms in the eastern U.S. It stopped publishing maps in 1963 when the superintendent of the map department retired. At some point, the J. W. Clement Company became associated with the Matthews-Northrup Company, another Buffalo-based publishing firm, but we have been unable to determine any details about that event. Learn More...


Crawford Covington Anderson (March 2, 1898 - December 24, 1980) was an American map maker. Born in Kentucky, he was attending the University of Kentucky before being drafted into the U.S. Army in 1918. By the 1940s, Anderson was living in Buffalo and working as a map maker for the J. W. Clement Company. From his World War II draft card, we know that he was married to Irene Anderson in February 1942, but do not know how long they had been married. He died in California. Learn More...

Very good. Laid down on linen.

Osher Map Library 52958.
Looking for a high-resolution scan of this?