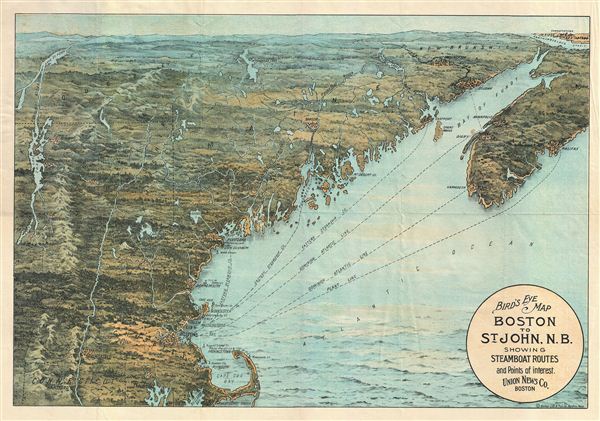 An attractive and uncommon c. 1900 bird's eye view map of New England, by the Boston map publisher George H. Walker. Printed with a multicolor lithograph process, Walker's view covers all of New England, from Cape Code, including Buzzard's Bay and Nantucket Sound northwards past Boston Harbor, Portland, and Maine, to the Maritime Provinces, the Bay of Fundy and New Brunswick. It includes the Canadian cities of St. John, Annapolis, Digby, Yarmouth, and Halifax as well as the U.S. cities of Bangor Maine, Penobscot, Portland, and Portsmouth, and many more. The map extends inland as far as Lake Champlain, including all of Vermont, New Hampshire, Maine and Massachusetts, as well as parts of Connecticut and Rhode Island. Inland cities identified include Providence, Hartford, Springfield Worcester, Concord, Bangor, Rutland, Montpelier, Burlington, and St. Albans. Steamship lines between Boston and various New England and Canadian cities are especially noted. Walker is better known for his similar view maps of Boston Harbor - the present example is thus somewhat out of his focus area and very scarce.