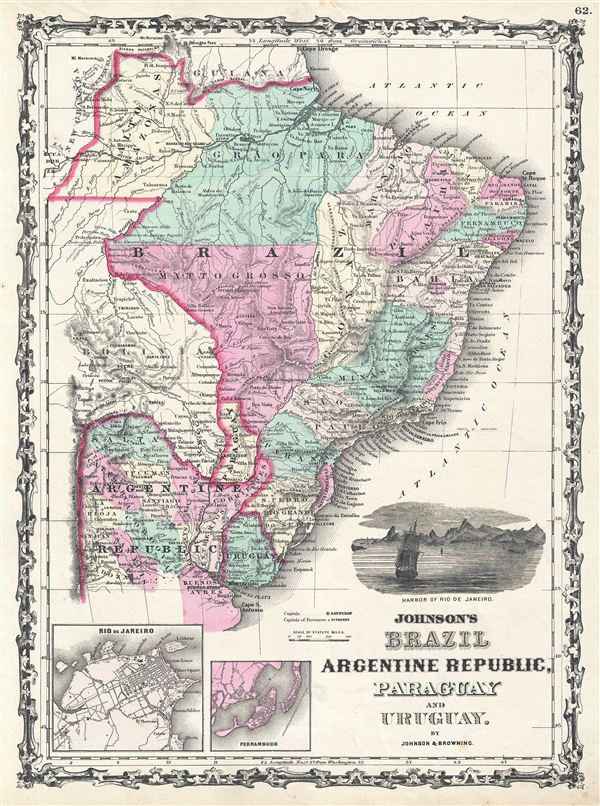 This is a beautiful example of A. J. Johnson and R. Browning's 1861 map of Brazil, the Argentine Republic (northern Argentina), Paraguay and Uruguay. It offers excellent detail both along the coast and inland, especially along navigable rivers. Shows most of Bolivia as well, through the border between Bolivia and Brazil was at the time unsurveyed and largely speculative. The Diamond Region in Bahia, just west of San Salvador is noted. Also notes Iguazu Falls in Argentina (Falls of Iquedas). The Amazon region is unsurprisingly vague though a few river ways and missionary stations are noted. Inset maps in the lower left quadrant detail Rio de Janeiro and Pernambuco. An engraved view in the lower right quadrant features a sailing ship entering the Harbor of Rio de Janeiro. The map is color coded according to region and notes several towns, cities, rivers, and various other topographical details. It features the strapwork style border common to Johnson's atlas work from 1860 to 1863. Published by A. J. Johnson and Browning as plate no. 62 in the 1861 edition of Johnson's New Illustrated Family Atlas. This is the last edition of the Johnson Atlas to bear the 'Johnson and Browning' imprint. Subsequent editions reflect Ward's 1862 acquisition Ross C. Browning's shares in the firm.