1728 Senex and Halley Map of Brazil 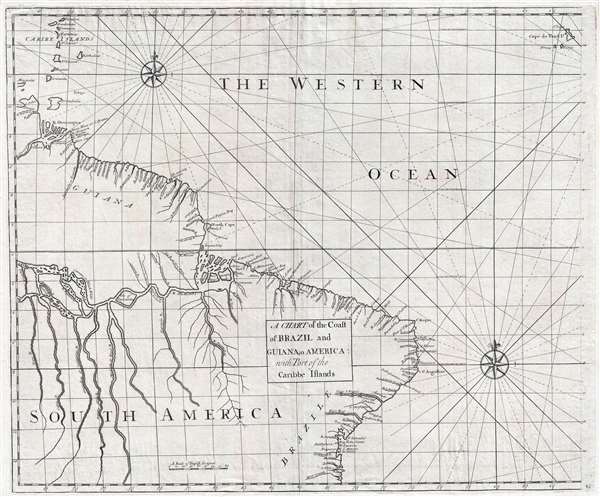 1728 Senex and Halley Map of Brazil

Features a gorgeous depiction of the Amazon River Basin.
$525.00

This is a 1728 John Senex and Edmond Halley map of Brazil and Guiana. The map depicts the coast of South America from the mouth of the Orinoco (Oronoque) River to All Saint's Bay / Baia de Todos os Santos (labeled as Bay Todos Santos) and Salvador, Brazil and from the Lesser Antilles to the Cape Verde Islands. Featuring an incredible illustration of the Amazon River, individual islands within the river are labeled. Not only are several tributaries of the Amazon depicted in detail, but they are also labeled, including the Tapajós (Tapaysos) River. Both the Orinoco and Amazon Deltas are illustrated in detail. Cayenne, in modern-day French Guiana, is also labeled. Several of the Lesser Antilles are depicted and labeled in the upper left corner, including Guadeloupe, Martinique, St. Lucia, St. Vincent, Barbados, Grenada, and Trinidad and Tobago.

This map was a collaboration between John Senex, Edmond Halley, Nathaniel Cutler, and Samuel Parker. It was published in John Senex's 1728 Atlas Maritimus and Commercialis, which was issued in an attempt to compete with Mount and Page's English Pilot, but never achieved the commercial success of the latter work.


Edmond (Edmund) Halley (November 8, 1656 - January 25, 1742) was an English astronomer, geophysicist, mathematician, meteorologist, and physicist. As Halley was such an accomplished individual, this biography will only be concerned with his contributions to cartography, of which there were many. Today, Halley is credited with the development of the earliest meteorological chart and the first printed isoline map. He also produced a map of the shadow of a solar eclipse that passed through London and a tidal chart. These maps are considered to be major contributions in thematic cartography. During the year 1686, Halley published four papers in the Philosophical Transactions. One of these, entitled 'An Historical Account of the Trade Winds, and Monsoons, observable in the Seas between and Near the Tropicks; with an attempt to assign the Phisical cause of the said Winds' was illustrated what has become known as the first meteorological chart. Although untitled, this map has come to be known as 'Halley's Chart of the Trade Winds'. Unaccompanied by a legend or a key, the only way to understand this map is to read Halley's article. The map lacks a scale, and the size of the grid varies, making Halley's first important map of the Earth difficult to interpret. In 1698, Halley was granted a temporary commission as a Captain in the Royal Navy and given command of the Paramour, a newly-built ship with the express purpose of test his magnetic theory in the southern hemisphere. Halley's voyage has become known as 'the first sea journey undertaken for a purely scientific object'. After being forced to return to Britain to deal with a mutinous crew, Halley set off anew in 1699 to test his theories. Following his return from more than a year aboard the Paramour, Halley published one of the most important maps in the history of cartography. Titled, 'A New and Correct Chart showing the Variations of the Compass in the Western and Southern Oceans' and based on over 150 observations on magnetic declination, this map is said to be the first printed map showing isotopes (lines of equal magnetic attraction). Per Norman Thrower

Halley's Atlantic chart is not only the first printed map of isogones, which were known as Halleyan lines for about a century, but it appears to be the earliest published isarithmic map of any kind. In quantitative cartography, isarithms (isolines) are lines, in series, connecting points of equal intensity of phenomena which have transitional degrees of intensity.

Halley's Atlantic chart was not published to accompany an article, it was actually published as a sheet map and measured 22.5 x 19 inches. Halley's next contribution to the history of cartography was a much larger world chart along the same lines as his Atlantic chart. This chart measured 20 x 57 inches on a Mercator projection. Most of the innovations associated with the world chart are similar to those of the Atlantic chart, just on a larger scale. Halley also undertook a survey off the English Channel, entitled ' A New and Correct Chart of the Channel between England and France with considerable Improvements not extant in any Draughts hitherto Publish'd shewing the sands, shoals, depths of Water and Anchorage, with yet flowing of the Tydes, and the setting of the Current; as observed by the Learned Dr. Halley.' Spanning two sheets, each measuring 25 x 19 inches, this chart was likely published in 1702. The chart bears numerous notations and conventions common by Halley's time, but the feature that sets it apart from 'all previous charts' is the inclusion of the tides