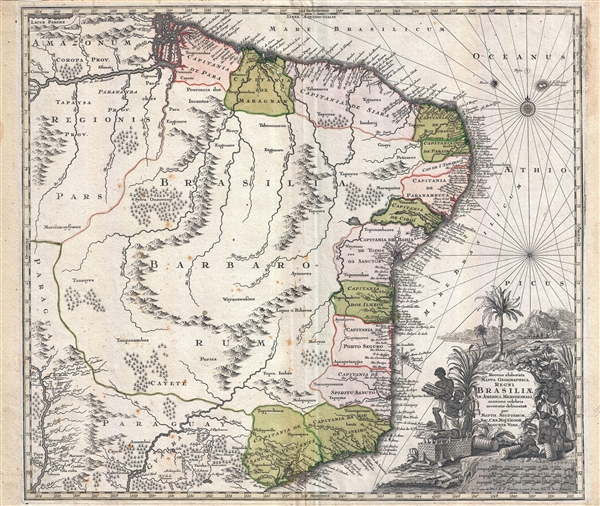 A very attractive 1730 map of Brazil by the Augsburg cartographer Matthaeus Seutter. The map covers Brazil from the mouth of the Amazon River to the city of São Paulo and from the Paraguay River to the Atlantic seaboard. In addition to Brazil, it also features parts of Paraguay. Cartographically, Seutter derived this map form Joan Blaeu's 1650 Nova et Accurata Totius Brasiliae Tabula. Bothe the coverage and content are very similar, offering great insight in the fact that in the intervening 100 years, no significant cartographic advancement regarding the mapping of the interior occurred. Speculative mountain ranges and indigenous tribal groups are noted, but there is little certainly. Lake Parima, the semi-fictional location of the supposed golden city of El Dorado, peaks in from behind the border in the upper left quadrant. There is an elaborate decorative title cartouche in the lower right. The cartouche features black skinned men harvesting sugar for export – at the time sugar was the driving force behind Brazil's economy.