1700 Wells Map of the British Posessions in North America 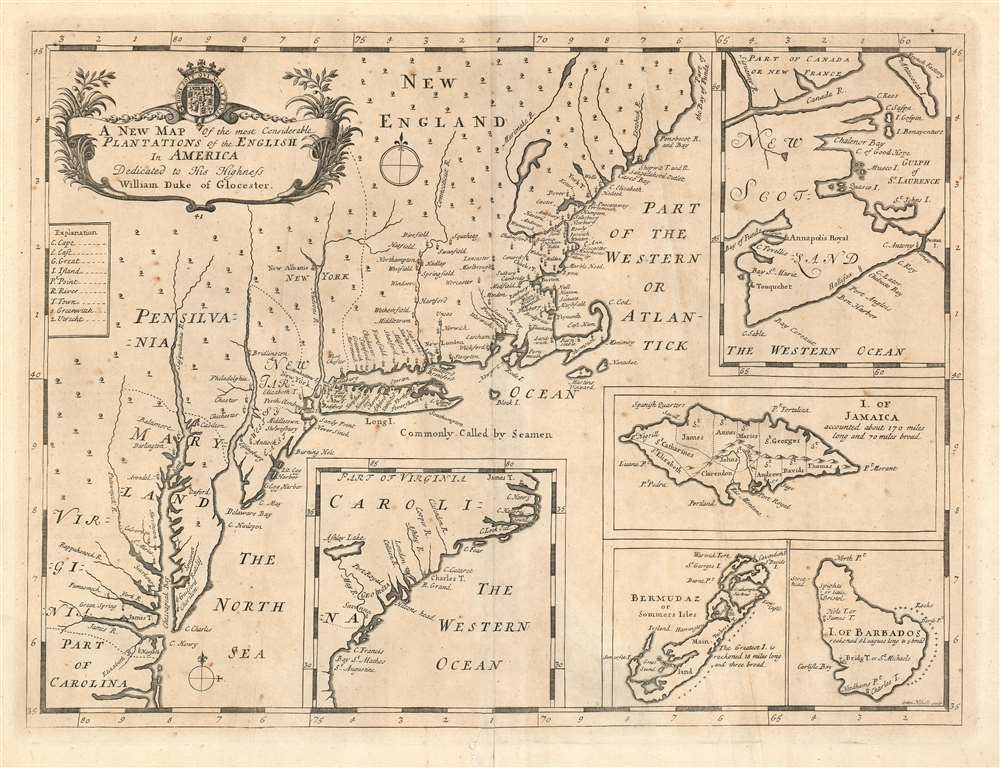 1700 Wells Map of the British Posessions in North America

One of a Very Few Early 18th Century English Maps of the British Colonies in America
$1,600.00

This is Edward Wells' 1700 map of the British colonies in North America, including insets of the islands of Bermuda, Barbados and Jamaica. It is one of a small number of English maps of the colonies from this period. Of particular interest is the profusion of now-recognizable place names evident throughout: while Dutch and French maps of the seventeenth and early eighteenth century tended to give precedence to the names of the tribes with whom they intended to trade, the English in this region came with intent to settle, and they brought their names along with them. New England, in particular, is rich in familiar names. By contrast, the colonies of New York and Pennsylvania show more trees than settlements, and are evocative of the frontier. Intended for academic use, the map is executed in a clear and simple style. The main map extends from North Carolina to the coast of Maine, showing 'Part of the Bay of Funda.' Additional inset maps focus on the Southeast (northern Florida to South Carolinia,) and 'New Scotland,' which embraces Nova Scotia and New Brunswick up to the Saint Lawrence River. The inset of Jamaica shows the parishes, and Port Royal is shown. All three of the island insets include notes regarding the relative sizes of the islands, while the insets for Carolina and New Scotland employ latitude and longitude bars to indicate the difference in scale from the main map.

This map was prepared for inclusion in Wells' A new sett of maps both of ancient and present Geography in 1700; this student atlas was successful and stayed in publication for many years thereafter. This example is of the rare third state identified by Burden, with a date of c. 1743.


Sutton Nicholls (fl. 1700–1740) was an English draughtsman and engraver living in London in the first part of the 18th century. He is best known for having produced a large number of views of places and buildings in London for John Bowles' 1725 Prospects of the Most Considerable Buildings about London’ (1725), Nicholls was also published in Stow's ‘Survey.’ Nicholls drew and engraved some large general birdseye views of London, and a number of portraits. Learn More...