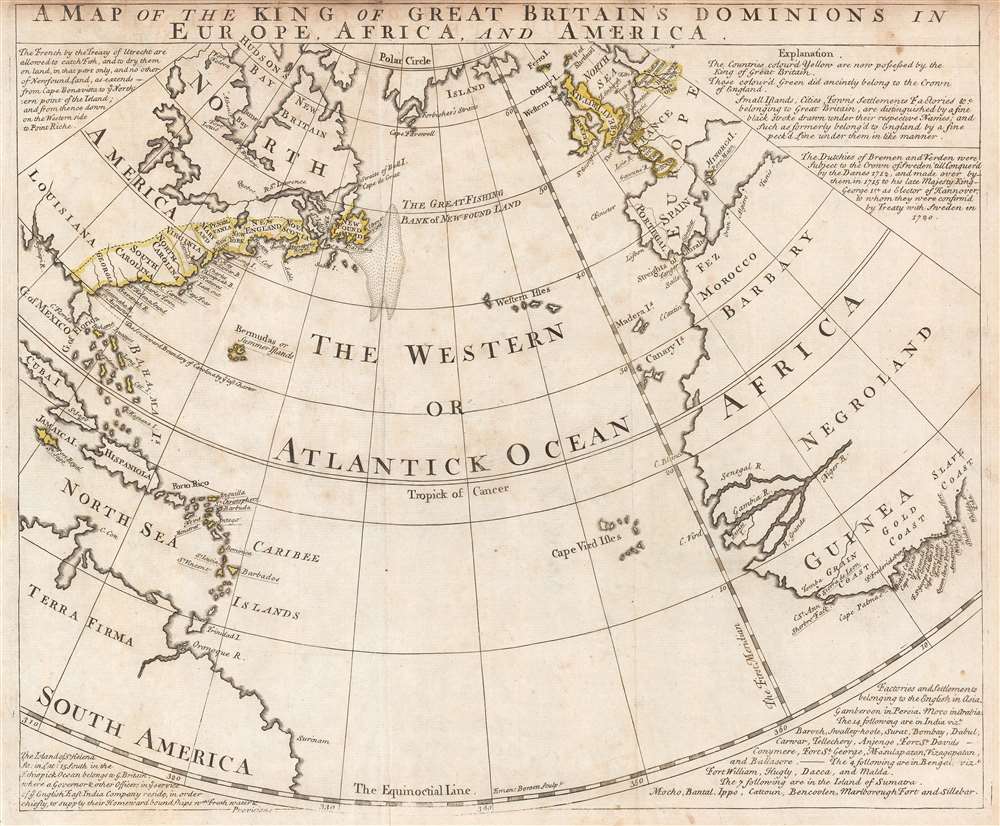 This is a c. 1740 pre-French and Indian War Emmanuel Bowen map of the British Empire in Europe, Africa, and the Americas, or what historians refer to as the Atlantic World. Beautifully engraved and highly informative, the map centers on the Atlantic Ocean, with the Americas on the left and Europe and Africa on the right. Yellow outlining is used to identify which parts of the world 'are now possessed by the King of Great Britain', including the American colonies that became the United States, numerous islands in the Caribbean, and a pair of duchies in modern-day Germany. Areas outlined in green were formerly controlled by the British crown. Colonies, settlements, islands, or countries, are identified throughout, several which are underlined, identifying it as a possession of the Great Britain. These include Gibraltar, Charles Town (Charleston, South Carolina), and Acra (Accra, Ghana), etc. Information concerning the map and the Empire is situated in the corners, including an explanation of how to read the map and details related to British possessions in Asia.

There is no definitive publication date. One source dates its publication at 1740, while another suggests 1752, and yet another puts forward a range from 1759-1763. One thing is certain, this map cannot postdate 1763 due to its depiction of Britain's American colonies. This depiction predates the 1763 Treaty of Paris which ended the French and Indian War. Under the terms of the treaty, France ceded the eastern portion of the Louisiana Territory (from the Mississippi River to the Appalachian Mountains) in this treaty, and here British possessions in North America end abruptly at the Appalachian Mountains.

Very good. Even overall toning. Light soiling. Some transference. Close top margin. Blank on verso.
Looking for a high-resolution scan of this?