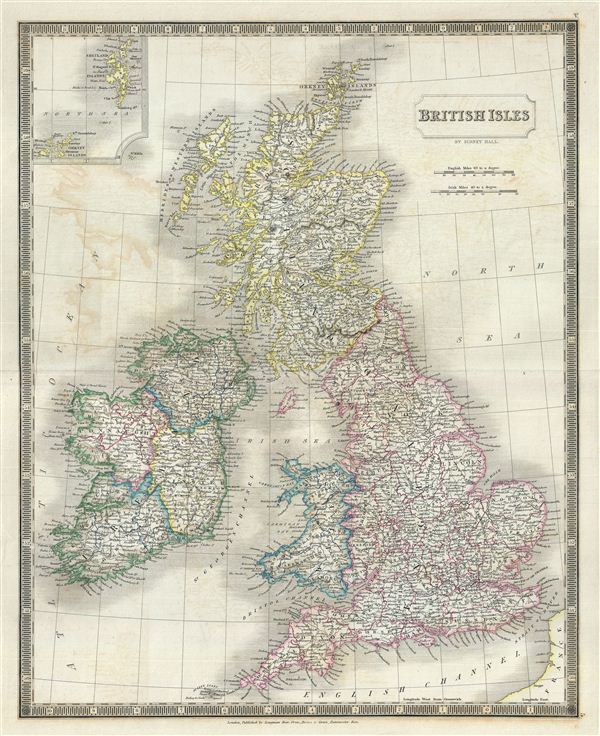 This is a beautiful map of the British Isles from Sidney Hall's extremely scarce 1835 New General Atlas. It includes England, Scotland and Ireland and covers from the Orkney Islands to the Scilly Isles in the south. An inset in the upper left quadrant details the Shetland Islands. This map notes towns, rivers, mountains, railroads, and various other important topographical details. Elevation throughout is rendered by hachure and political and territorial boundaries are outlined in color. As this map was being printed, the Kingdom of Great Britain and the Kingdom of Ireland had already amalgamated into a single political entity. England and Scotland were in the midst of the Industrial Revolution. Though England and Scotland flourished throughout the 19th century, Ireland suffered a series of famines, the worst being the Great Irish Famine, which lasted from 1845 Â– 1849 and killed about a million people.

Sidney Hall's New General Atlas was published from 1830 to 1857, the first edition being the most common, with all subsequent editions appearing only rarely. Most of the maps included in the first edition of this atlas were drawn between 1827 and 1828 and are most likely steel plate engravings, making it among the first cartographic work to employ this technique. Each of the maps in this large and impressive atlas feature elegant engraving and an elaborate keyboard style border. Though this is hardly the first map to employ this type of border, it is possibly the earliest to use it on such a large scale. Both the choice to use steel plate engraving and the addition of the attractive keyboard boarder are evolutions of anti-forgery efforts. Copper plates, which were commonly used for printing bank notes in the early 19th century, proved largely unsuitable due to their overall fragility and the ease with which they could be duplicated. In 1819 the Bank of England introduced a Â£20,000 prize for anyone who could devise a means to print unforgeable notes. The American inventors Jacob Perkins and Asa Spencer responded to the call. Perkins discovered a process for economically softening and engraving steel plates while Spencer invented an engraving lathe capable of producing complex patters repetitively - such as this keyboard border. Though Perkins and Spenser did not win the prize, their steel plate engraving technique was quickly adopted by map publishers in England, who immediately recognized its value. Among early steel plate cartographic productions, this atlas, published in 1830 by Longman Rees, Orme, Brown & Green stands out as perhaps the finest. This map was issued by Sidney Hall and published by Longman Rees, Orme, Brown & Green of Paternoster Row, London, in the 1835 edition of the Sidney Hall New General Atlas.