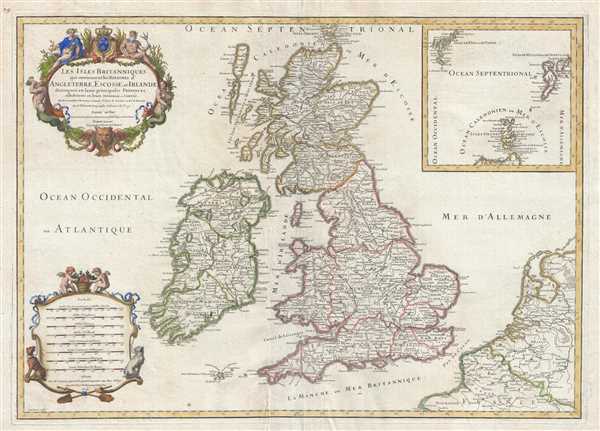 This is a rare 1709 Hubert Jaillot map of the British Isles. The map depicts the region from the Atlantic Ocean to the North Sea and from the Orkney Islands to the Pas de Calais and Normandy in northern France. England, Scotland, Wales, and Ireland are bordered in different colors, allowing for easy differentiation. Numerous cities, towns, and villages are labeled, along with the provinces. The smaller islands surrounding the two principal British Isles, such as the Orkney Islands, Skye Island, the Isle of Man, and the Isle of Wight. An inset map, situated in the upper-right corner, depicts the Orkney Islands, the Shetland Islands, and the Faroe Islands which are located north of Scotland in the North Sea. France and the Netherlands are illustrated in the lower right corner, in decent detail, with numerous labeled cities and town, including Dunkirk, Calais, Arras, Brussels, Louvain, and Bruges. A decorative title cartouche is situated in the upper left corner, with a decorative cartouche for the various scales in the lower left corner.

This map was created by Hubert Jaillot in 1709 and was enlarged from a map created by Nicolas Sanson.