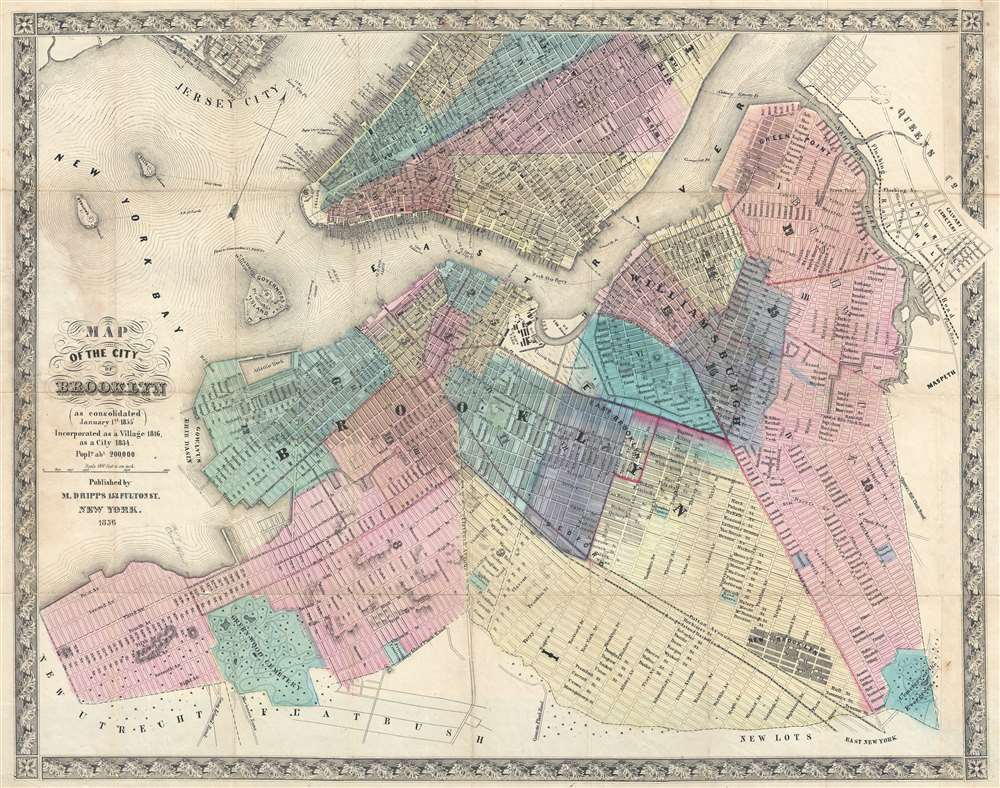 One of the earliest maps to illustrate Brooklyn after its 1855 consolidation.

This is a scarce 1856 map of Brooklyn, New York City by Matthew Dripps. The map follows the 1855 consolidation of Brooklyn, Williamsburg, Bushwick, and Greenpoint into a single city - as such it is one of the first maps to show Brooklyn much as we know it today - in fact, it is the earliest obtainable map we are aware of to do so. The map extends southwards roughly to 60th street, eastwards to Evergreen Cemetery, and northwards to Newtown creek. Parts of adjacent Manhattan (as far north as 40th Street), Queens (Long Island City), and Jersey City are illustrated. Many modern neighborhoods are not specifically named, such as Red Hook, Bedford Stuyvesant, Fort Green, etc. but are nonetheless present and identifiable. The Brooklyn Navy Yard is clearly represented with individual buildings recognizable. Sunset Park, although not identified, is apparent via the hachuring used to render elevation. Prospect Park, not yet conceived, is notably absent.

This map does much to express the optimism and industrial transformation then happening in Brooklyn. Prospective landfills are ghosted in, important piers are noted, and ferry lines to and from various parts of Manhattan proliferate. The Fulton Avenue Trolley Service is noted as is the nascent Long Island Railroad extending along Atlantic Avenue. When this map was made the population of Brooklyn was 200,000. Four years later census takers identified Brooklyn as the 3rd largest city in the United States. The new city's 18 wards, now defunct political districts common in the 19th century, are laid out and color coded in an extensive forward-thinking grid plan - even where actual development is lacking. The contrast between these areas and the surrounding communities of New Utrecht, Flatbush, New Lots, and East New York, which are represented with trees, underscore how these bordering communities remained quite rural well into the later 19th century. The map also notes New Brooklyn along Fulton Avenue between Decatur Street and Hull Street in Bedford-Stuyvesant. As far as we can tell, New Brooklyn was the name of a community on the Brooklyn and Jamaica Turnpike and Hunterfly Roads. It is occasionally contemporaneously cited in the Brooklyn Eagle and the Brooklyn Evening Star, but the name quickly fell out of favor and was abandoned.

A manuscript annotation in pencil on 55th street marks the site of the Coney Island Ferry.

This map was published in two known editions, 1855 and the present 1856 example. Four known examples are cataloged in OCLC, part of the collections at the Brooklyn Historical Society, the New York Public Library, the Queens Public Library, and Cornell University.

Very good. Laid down on archival tissue for stability. Removed from but accompanied by original gilt stamped linen binder.