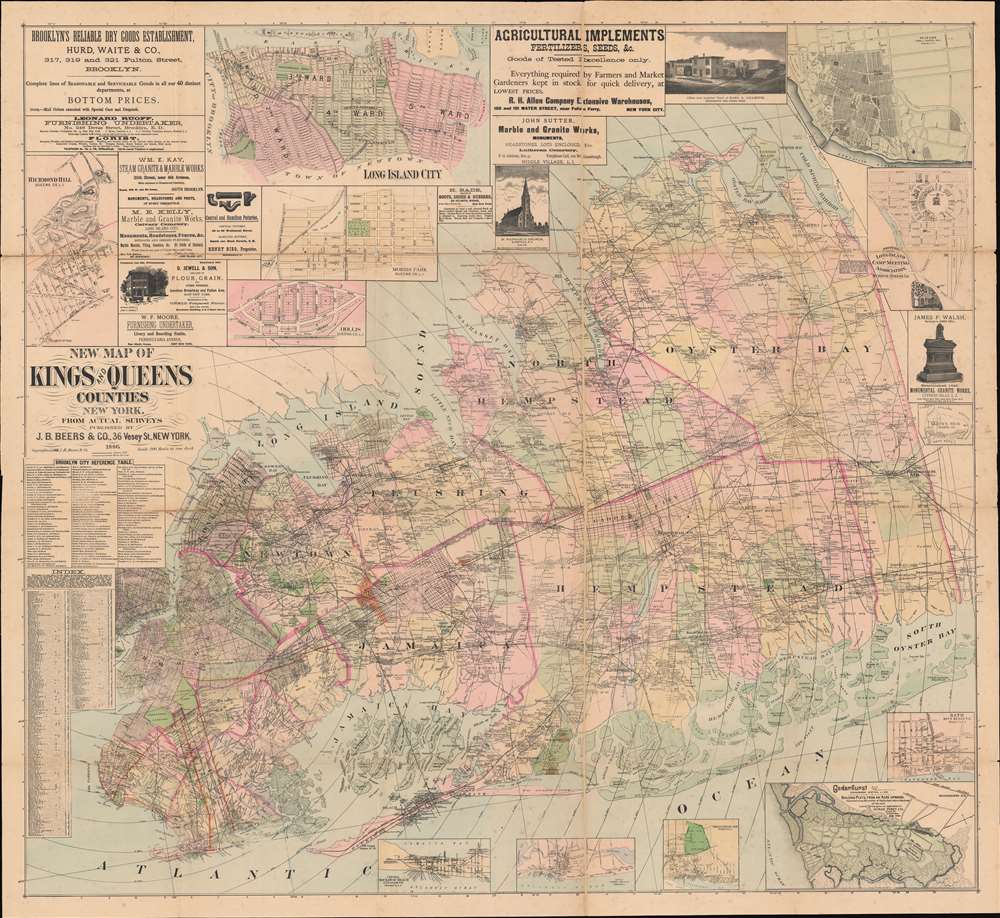 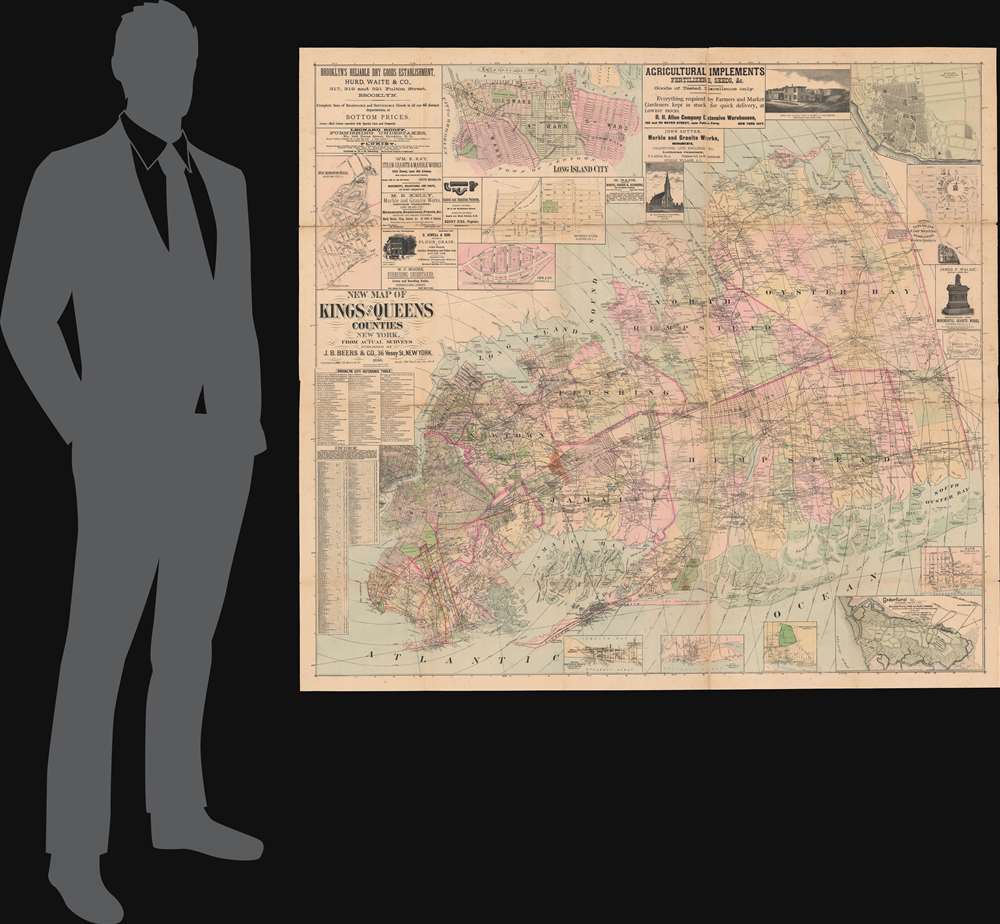 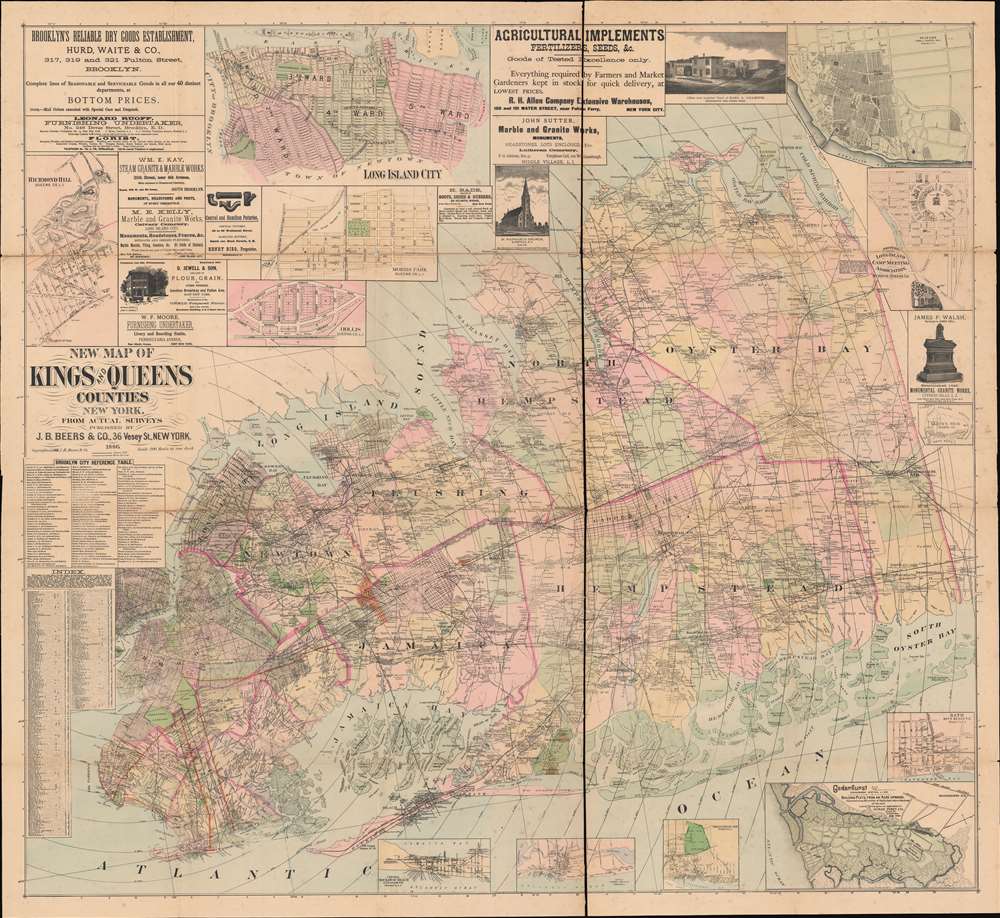 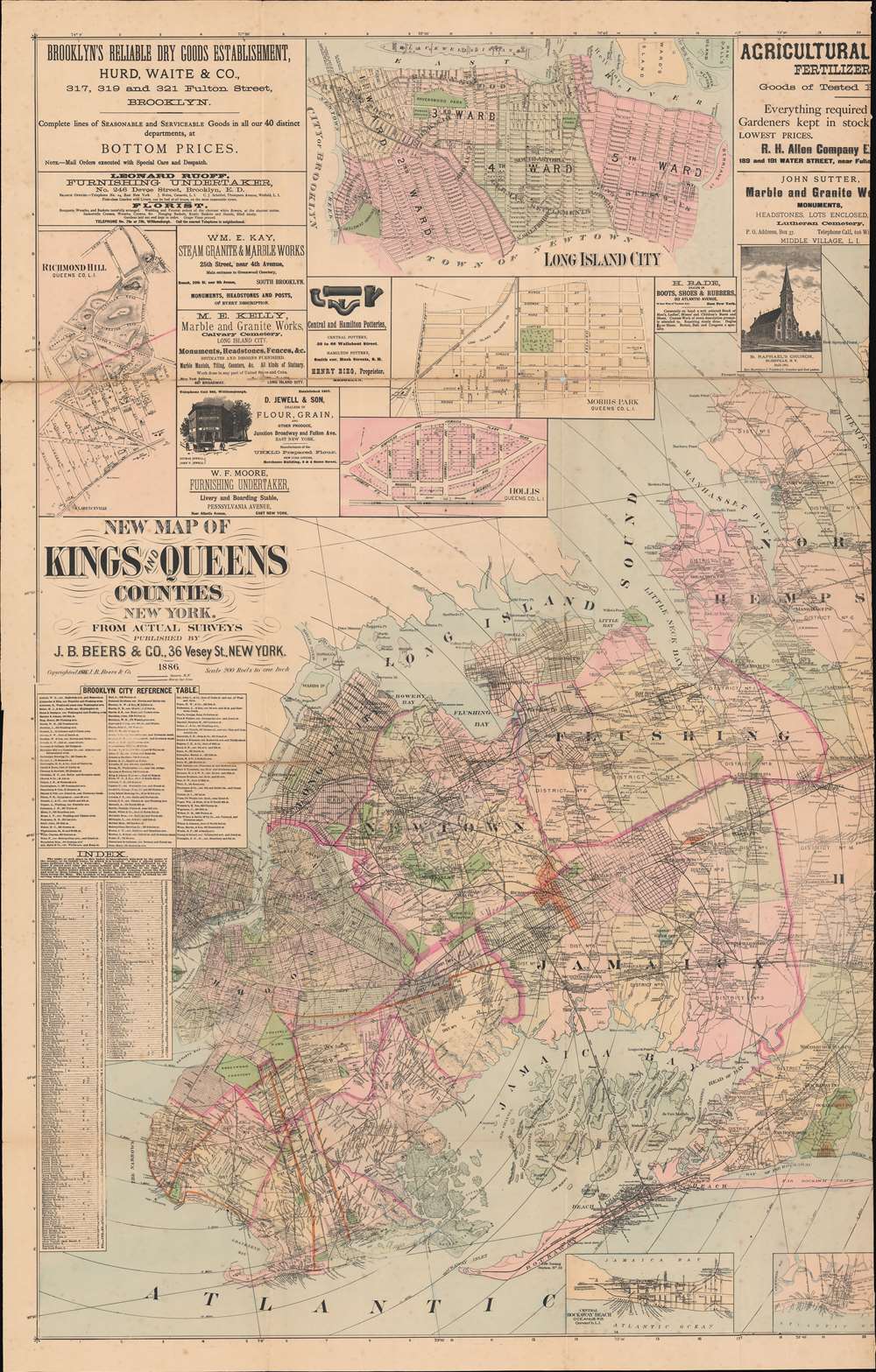 A most intriguing large scale 1886 folding wall map of Brooklyn and Queens issued by J. B. Beers. The map reflects enthusiasm for Long Island at the height of the late 19th-century Long Island Real Estate Boom. The map's coverage extends from Manhattan to the modern-day border of Suffolk County, including all of Brooklyn, Queens, and Nassau County (separated from Queens in 1899). Like most Beers maps, it is impressive in its details, marking individual property owners throughout.

The large map is surrounded by promotional advertisements for a variety of New York businesses, ranging from monument makers, to plumbing fixtures, to 'reliable dry goods', to farm implements. Most are admittedly quite morbid, with monument makers and undertakers being the most prevalent advertisers. In addition, there are inset maps of Richmond Hill, Long Island City, Morris Park, Hollis, Sea Cliff, Bath, Cedarhurst, Sheepshead Bay, Coney Island, and Rockaway. There is also an interesting inset of the Merrick Camp Grounds - built for annual Methodist revival meetings.

The Third Great Awakening swept through the United States in the second half of the 19th century, leading to widespread Revivalism. Revivalism assumed that religious devotion goes through periods of decline and renewal. 'Renewal' led to regular religious meets - often at large camps - where in faith leaders would preach and 'correct' the wayward. The Methodist Revival movement gained exceptional momentum in Long Island where, in 1869, the Camp Meeting Association constructed a large revival site in Merrick, New York. The site, occupying some sixty acres, consisted of a large central tabernacle surrounded by concentric circles of houses and cottages that could be rented by the faithful. While the regular population of the camp hovered around 300 people, during revival meetings it could surge to more than 10,000. While revival meetings are no longer held at the Merrick Camp, some of the old cottages remain.

The map was published by J. B. Beers in 1886. We are aware of only one edition. The map is rare and often found in exceptionally poor condition - even in institutional collections. We note perhaps six verifiable holdings, including the Library of Congress and the New York Public Library. Scarce to the market.

Good. Laid on linen in two large separate sections. Both exhibit wear on old fold lines and slight loss at some fold intersections. Accompanies original binder. Left and right sections (see image 3) could be joined with a linen binding strip on request.