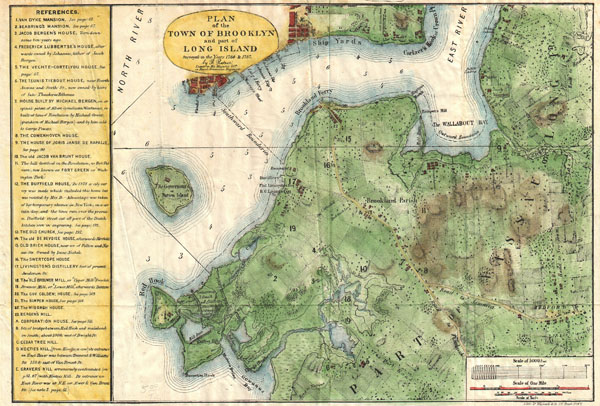 A rare and very attractive plan of Brooklyn, New York drawn in 1867 by Samuel Edward Stiles. Designed for Stiles' important History of Brooklyn, this map is based upon surveys of Brooklyn originally taken in 1766 and 1767 by Bernard Ratzer. Includes much of modern Brooklyn including parts of Red Hook, Gowannas, Fort Greene, Williamsburg, part of Greenpoint, Brooklyn Heights, Cobble Hill Carrol Gardens, Park Slope, Prospect Height, Clinton Hill and Greenwood. Offers superb detail to the level of individual buildings, many of which are numbered and labeled in the interesting chart to the left of the map proper. Interestingly this chart notes both 18th century building locations as well as their 1867 street locations – many of which are consistent to modern times. Includes the Van Dyke Mansion, the Seabrings Mansion, the Jacob Bergen House, the Frederick Lubbertse House, the Vechte-Cortelyou House, the Teunis Tiebout House, the Michael Bergen House, the Cowenhoven House, the Jorse Janse de Rapalje House, the Jacob Ban Brunt House, the Duffield House, the OldChurch, the De Bevoise House, the Old Brick House, the Swertcope House, the Livingston Distillery, the Old Brouwer Mill, Brouwer Mill, the Governor's Colden House, the Bamper House, the Middagh House, Bergan's Hill, a Coporration House, Cedar Tree Hill, Koeties Kill and Gravers Kill. Drawn by Edward Stiles and engraved by Hayward and Company of 171 Pearl Street, New York.

Samuel Edward Stiles (August 26, 1844 - October 9, 1901) was a 19th century historian and medical doctor based in Brooklyn, NY. As a child Stiles attended Brooklyn Public School No. 11. Graduating from High School, Stiles took work as a dry goods clerk. In 1864 Stiles was recruited by his elder brother, Dr. Henry Stiles, to work as an Assistant Librarian in the Long Island Historical Society. Working here Stiles developed a lifelong love of Brooklyn history. In 1867 he compiled his important multivolume History of Brooklyn." Afterwards Stiles turned his attention to the medical profession in which he became a prominent Brooklyn doctor and ardent supporter of Homeopathic medicine. Stiles died in 1901 and was survived by seven children. Learn More...


Bernard Ratzer (aka Bernhard, aka Ratzen) (fl. 1756 - 1782) was an important military engineer, cartographer, and surveyor active in the mid to late 18th century. While he is often referred to as 'British', Ratzer was most certainly German. Nothing is known of Ratzer's youth. He first appears on February 20, 1756, when he is identified as one of the German officers recruited under the Commissions to Foreign Protestants Act 1756 (29 Geo. 2 c. 5) as a Lieutenant in the First Battalion of the British Royal American Regiment. The Regiment was raised to compensate for British troop shortages during French and Indian War (1754 - 1763). The Act called for engineers and officers to be German-speaking so they could effectively command the all-Germanic regiment. According to the mandate, in addition to regulars, there would be 50 officers and 20 engineers, none of which would be allowed to advance beyond the rank of lieutenant-colonel. Many of the officers and engineers, likely including Ratzer, were recruited in Europe by the swiss Engineer James Prévost. He must have already had extensive engineering training, as he was immediately assigned to work under the Dutch surveyor Samuel Holland as a lieutenant in military engineer's division. Most of his earliest survey work survives only in manuscript form, and is related to the activities of the Royal Americans. Ratzer's first recorded map, created when he was an ensign, details Maine's Passamaquoddy Bay (1756). He also completed several smaller surveys of French and Indian War forts around Lake Ontario and on the Niagara River. After the war, Ratzer was one of the 1500 victorious British troops that arrived in New York. The New York Governor Henry Moore assigned him the task of improving upon the critically flawed John Montresor map of 1767. This resulted in Ratzer's two most important maps, the 'Ratzen Plan' (1767) and the much larger 'Ratzer Map' (1776), both considered to be among the finest maps of any American city issued during the 18th century. Between surveying the 'Ratzen Plan' and the larger 'Ratzer Map,' Ratzer was next assigned to work with Samuel Holland on the New York - New Jersey Border Line Survey producing an important manuscript map in 1769, now in the Harvard University Collections. This survey work was published by William Faden in 1777, during the American Revolutionary War, as 'The Jerseys.' Due to the engraver Thomas Kitchin's misspelling of his name on the title of the 1767 Plan of the City of New York, also known as the 'Ratzen Plan,' Ratzer's name is often confused as 'Ratzen.' Ratzer must have found military life to his liking, as he remained in the British Army, achieving the rank of Captain in 1773, and Major in 1782. Learn More...

Bulletin of the New York Public Library, vol. 4, 1902, Page 84.
Looking for a high-resolution scan of this?