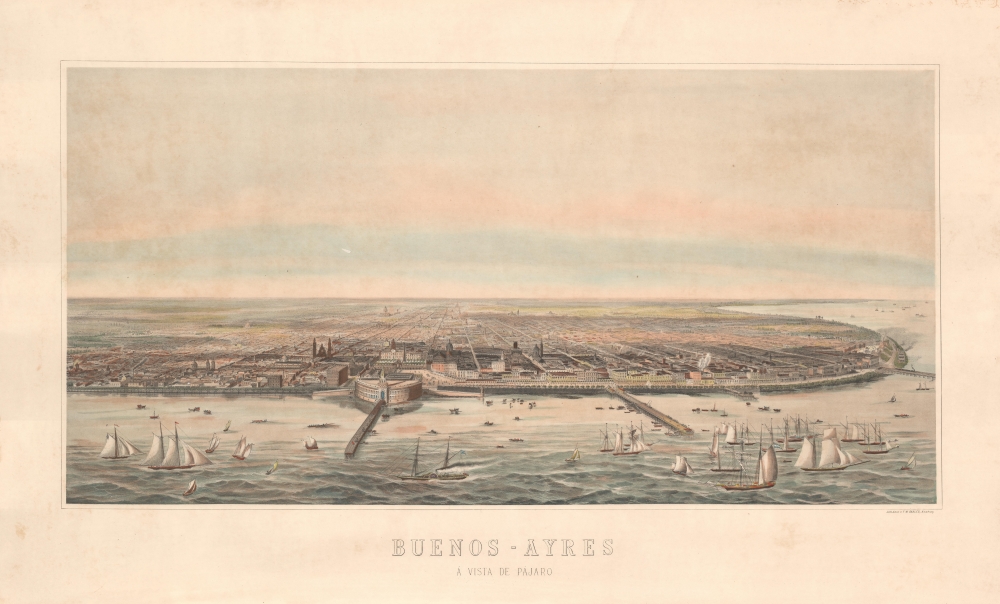 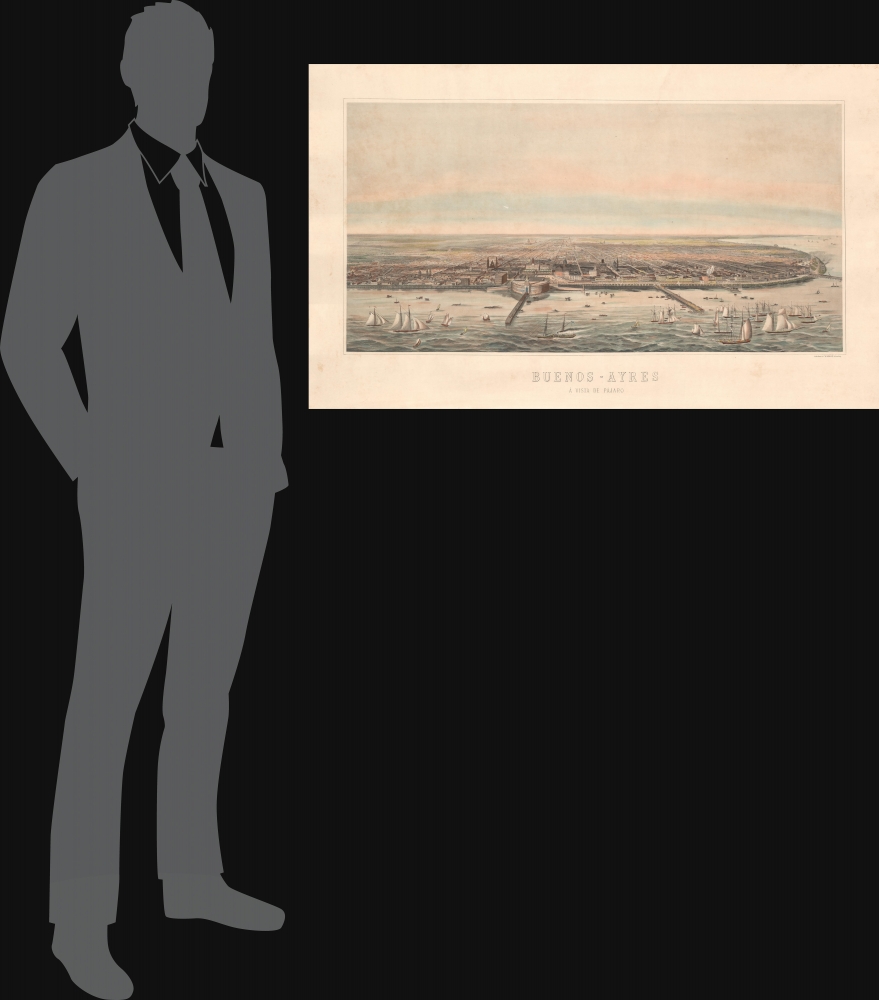 A striking aquatint 1898 F. W. Kähler bird's-eye view of Buenos Aires, Argentina. The view looks west on Buenos Aires from a high point above the Rio de la Plata. Given the perspective, it is likely that the view was drawn from a balloon. The view is centered on the Porto Madero district, with the dramatic semi-circular customs house, the Aduana de Taylor, taking center stage. The two enormous piers, extending far out into the river, underscore one of Buenos Aire's long-standing problems - the river port was exceptionally shallow close to the city, forcing deep draft vessels, such as oceangoing cargo and passenger ships, to anchor far out in the river. The revival of this image in Hamburg in the late 19th century is likely related to the introduction of Hamburg-America Line services to Buenos Aires.

The iconic semi-cirucular Aduana Neuva, or Aduana de Taylor, was designed by Edward Taylor to serve as Buenos Aires' primary customs house. Construction began in 1855 and the building was inaugurated in 1857. It was built upon the first major landfill reclaimed from the Rio de la Plata. The gracious palace-like half-moon façade, best seen from the river, was intended as a symbol of the city's economic prosperity, modernity, and power. It served the citizens of Buenos Aires until 1894, when it was demolished to make way for the Porto Madero project, a major land reclamation intended to address the long-standing shallow port issue and modernize the facilities. Parque Colón now rests where Aduana de Taylor once stood. The surrounding Porto Madero district is one of the sleekest neighborhoods in Buenos Aires, known for its fine dining, shopping, and nightlife.

This view is based upon a painting by Schweper and was published in 1898 by F. W. Kähler in Hamburg, Germany. We note several variations on this view, the earliest having been publishing in Paris in 1864 by Jean Désiré Dulin. Other examples were printed by Lemercier, also in Paris, and by Ernst Nolte Libreria Alemana of Buenos Aires. Some examples are two-color lithographs, some have additional hand color, others are, as here, are combination aquatint, lithograph, and hand color.

F. W. Kähler (fl. c. 1863 - 1907) was a German lithographer active in Hamburg in the late 19th and early 20th centuries. Kähler began printing around 1863 under the imprint of 'Lithographische Anstalt F. W. Kähler'. Much of his work is realated to promoting the robust Hamburg shipping industry. Around 1901, the firm began trading as F. W. Kähler Erben, having passed to his heirs, W. Kähler, H. Kähler, E. Kähler, and M. Kähler. Learn More...

Good. Light foxing.
Looking for a high-resolution scan of this?