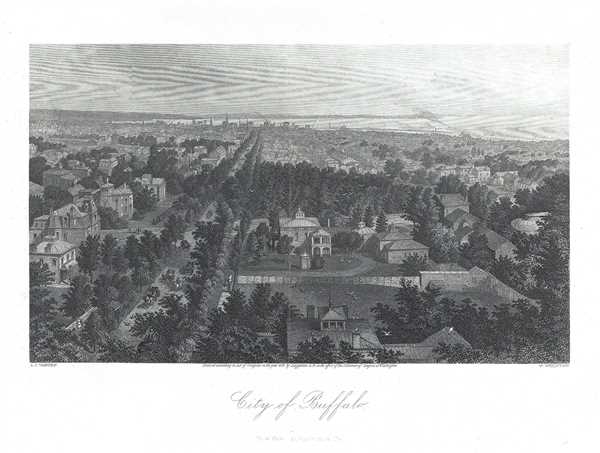 This is an 1873 Asa Coolidge Warren and William Wellstood view of Buffalo, New York. The view depicts the city of Buffalo looking toward Lake Erie. As the publication, which it accompanied, desired to promote tourism throughout the United States, a wealthier, more appealing neighborhood was illustrated. A wide, tree-lined street runs just left of center toward the lake. Horse-drawn carriages and men on horseback can be seen traveling along the road. Numerous very large houses are depicted, including two which figure prominently in the center-foreground of the work. Buffalo stretches out from here to the shores of Lake Erie, with several church steeples are discernable in the distance.

This view was created by Asa Coolidge Warren and engraved by William Wellstood for Picturesque America; or The Land We Live In.

Asa Coolidge (A. C.) Warren (1819 - 1904) was a Boston artist. Several of his works were included in Picturesque America; or, The Land We Live In. He also drew twenty-three illustrations for Beyond the Mississippi and was a member of the short-lived Boston Artists’ Association (1841-1851).


William Wellstood (1819 - 1900) was an American engraver born in Edinburgh. He settled in New York in 1830. He specialized in stipple engraving.