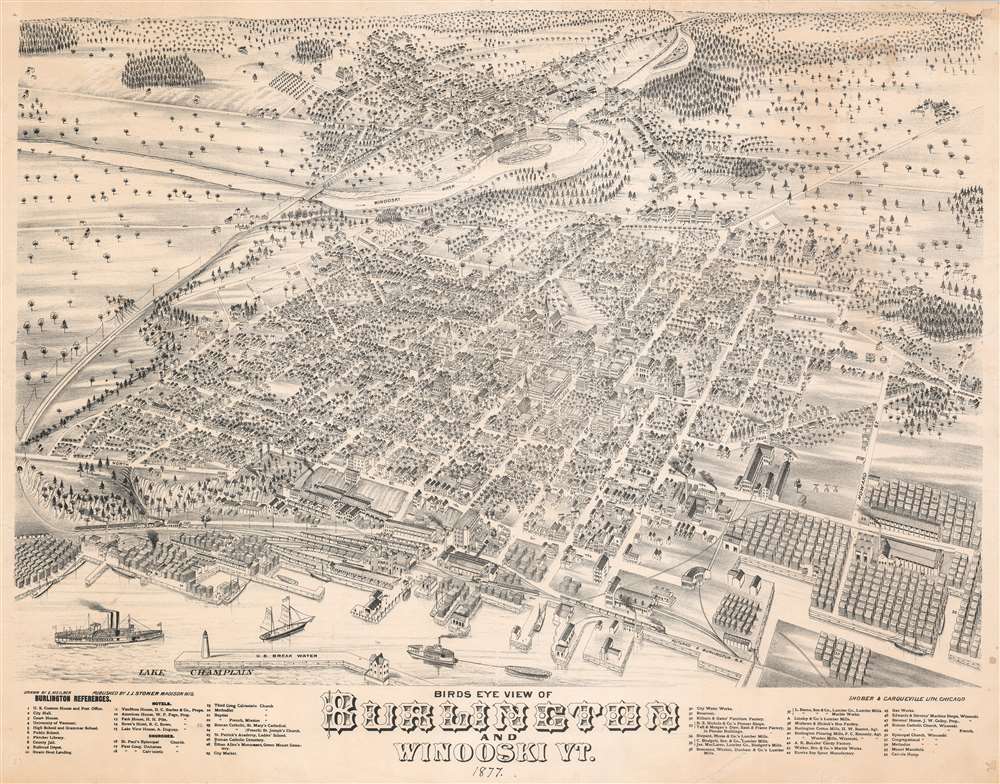 Rare view of one of Vermont's most beautiful and historic cities.

A beautiful 1877 bird's-eye view and map of Burlington and Winooski, Vermont by Joseph J. Stoner and E. Meilbek. The view looks on Burlington from a point to the southwest high above Lake Champlain, with Main Street at the center of the map eastward proceeding from the lake.. In the distance, to the northeast, the neighboring town of Winooski is well drawn across the Winooski River. Even farther, the forested Green Mountains are prominent. The view is based on artwork by E. Meilbek, of whom almost nothing is known.

The view was published in 1877 by the Madison, Wisconsin, firm of Joseph John Stoner. There appear to be at least two states, one a 3-color chromolithograph, with a large upper horizon region, and a slightly smaller black and white version, showing less sky over the horizon. Both seem to have appeared in 1877. The view is based upon a drawing by E. Meilbek and was lithographed and printed by Shober and Carqueville, Chicago. All states and examples are rare. We note one reference in the OCLC, locating the Library of Congress example. Further examples are known at the Vermont Historical Society and at the University of Vermont, Burlington.

Joseph John Stoner (December 21, 1829 - May 1917) was a Madison, Wisconsin based publisher of bird's-eye city views active in the late 19th and early 20th centuries. Stoner was born in Highspire, Pennsylvania and apprenticed as a carver of ornamental chairs before turning to publishing. He partnered with the bookseller Ephraim T. Kellogg of Madison, Wisconsin, for whom he was a traveling agent. His career in views began around 1867 when he met and befriended the bird's-eye view artist Albert Ruger, who was sketching Madison that year. Ruger and Stoner partnered and began publishing city views under the imprint 'Ruger & Stoner.' The partners traveled extensively through the Midwest publishing some 11 city views under their joint imprint - although there may be as many as 62 others unattributed. The partnership partially dissolved in 1872 although they continued to work together on a contractual basis. Stoner subsequently traveled even more extensively, hiring young artists to sketch city views in such wide ranging destinations as Texas, Maine, and Oregon, among others. He produced a total of some 314 views with various artists including: Albert Ruger, Herman Brosius, Thaddeus M. Fowler, Augustus Koch, Albert F. Poole, Henry Wellge, Joseph Warner, and Camille N. Drie (Dry). Stoner died in Berkeley, California in 1917. Learn More...