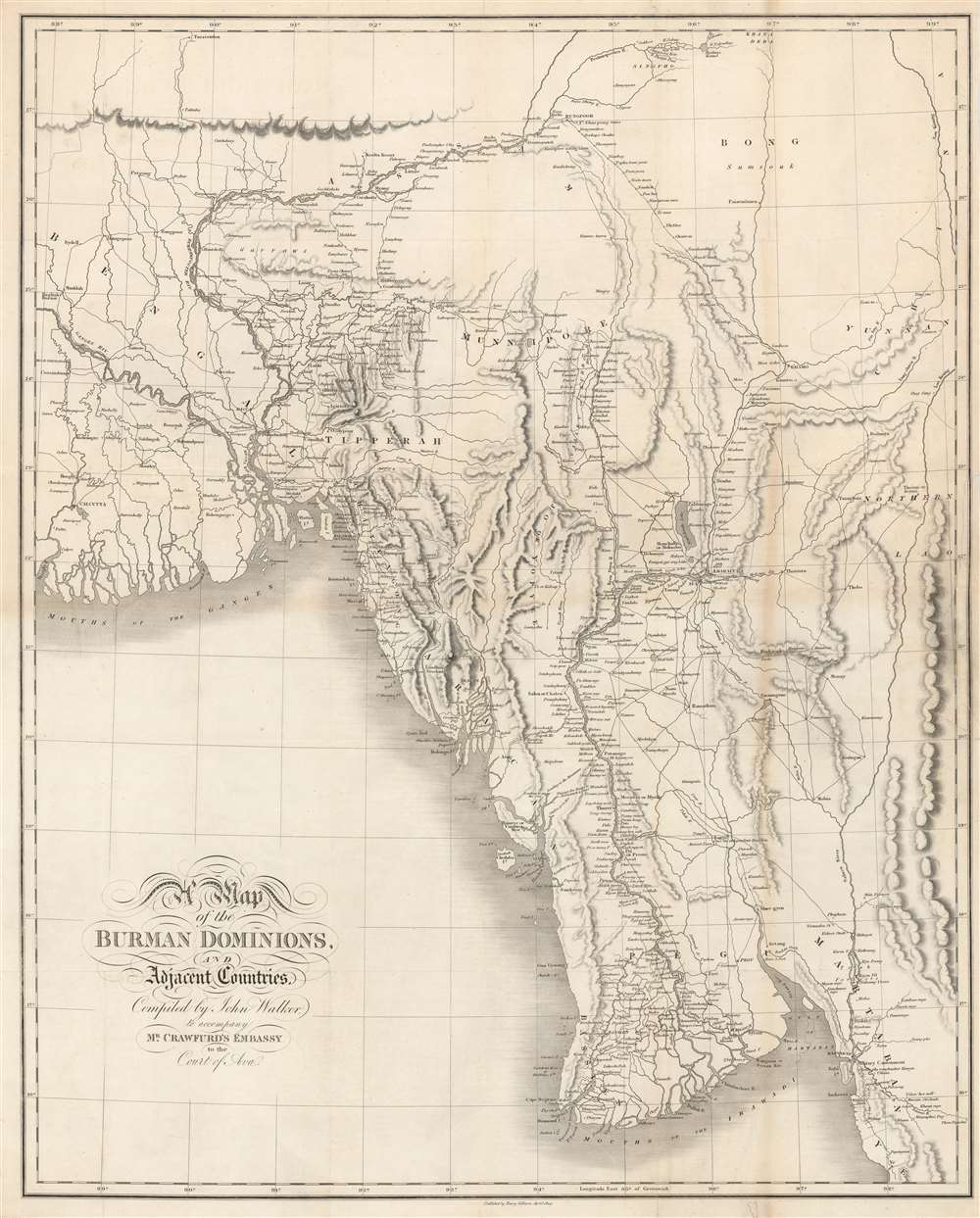 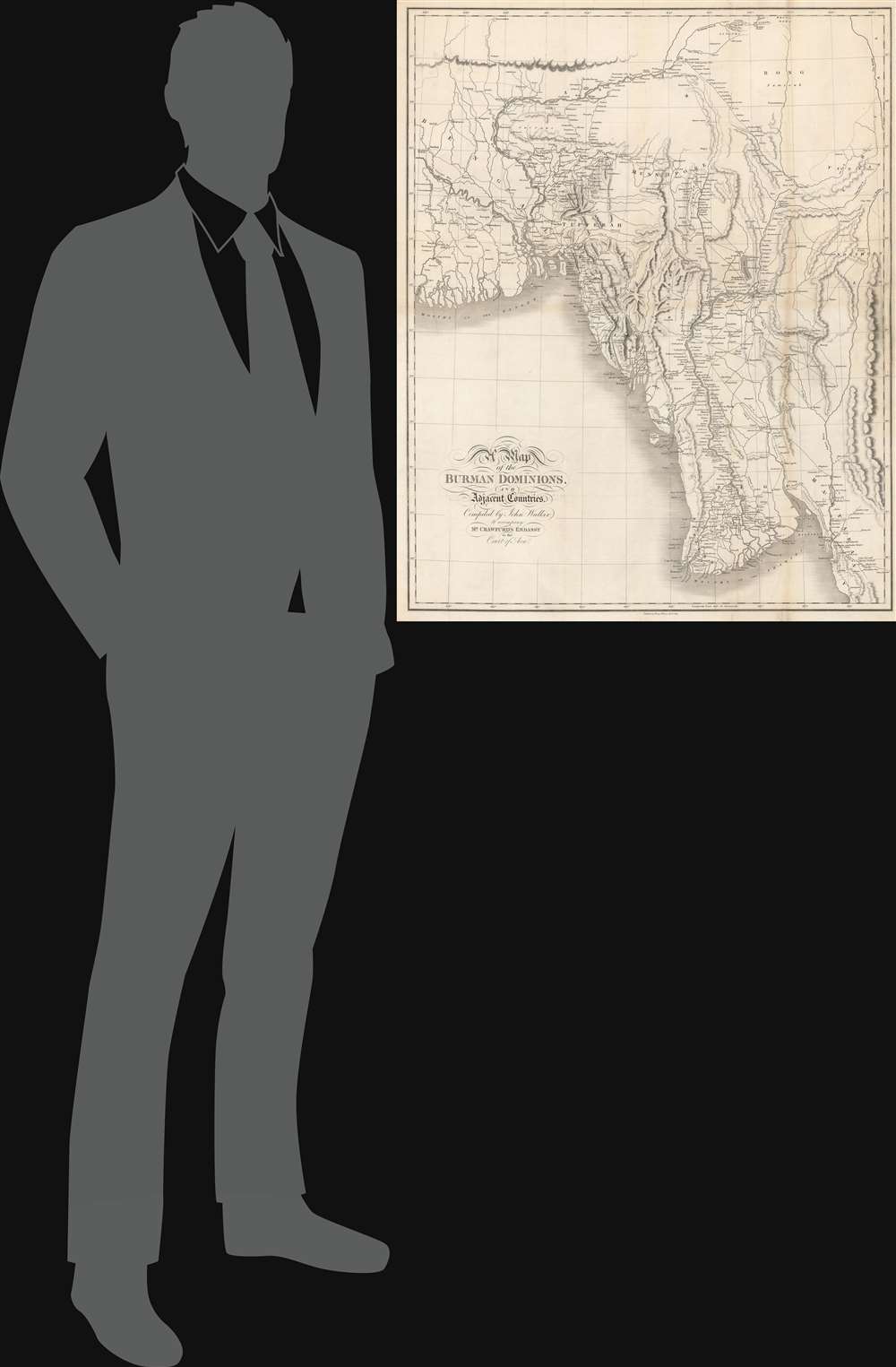 This is an 1829 John Crawfurd and John Walker map of Burma, or as it is known today, Myanmar. The map, considered the first accurate map of this region, was prepared to illustrate the narrative of John Crawfurd's Embassy to Ava to negotiate with Burmese King Bagyidaw following the First Anglo-Burmese War (1824 - 1826). Centered on the Irrawaddy Valley, the map depicts the region from Calcutta to Yunnan Province in China and northern Laos and from Tassisudon to the mouths of the Irrawaddy River and the Gulf of Martaban. Dozens of villages, towns, and cities are labeled all along the Irrawaddy River from Amarapura (Mandalay) to Rangoon (Yangon), in the Irrawaddy Delta, and on the roads from Rungpoor to Bhamo and from Bhamo to Amarapura, but otherwise much is left blank, illustrating how little this region was known to European powers of the early 19th century.

Bagyidaw, aka Sagaing Min, seventh king of the Konbaung Dynasty of Burma (1784 - 1846), inherited an empire near its height in terms of both land controlled and military power. He was unfortunate enough to share a border with British India, which had an interest in expanding its holdings into Burma. The British fostered rebellions in Bagyidaw's border provinces, including Arakan, Manipur, and Assam, all of which had been brought into the fold of Burmese dominion by Bagyidaw's grandfather. The British also encouraged border incursions.

When Bagyidaw ordered his troops to pursue rebels into British territory, the war began. With an ill-defined border and rugged mountainous jungle territory, the First Anglo-Burmese War turned out to be one of the longest, most expensive, and bloodiest wars in the history of British India. Nonetheless, it ended decisively for the British, despite throwing British India into a severe economic crisis and ultimately contributing to the demise of the British East India Company's remaining privileges.

In the aftermath of war, Lord Amherst sent John Crawfurd on an envoy mission to Burma to negotiate terms with the chastised King Bagyidaw. Crawfurd and his party traveled up the Irrawaddy from Rangoon to Ava on the paddle steamer Diana with four support boats. Arriving at the Court of Ava, Crawfurd negotiated a complete surrender of Assam, Manipur, Cachar, Jaintia, Arakan Province, and Tenasserim to British India. The king also conceded to a trade agreement, in return for a delay in indemnity payments, and later sent his own mission to Calcutta.

For the Burmese Empire, it was the beginning of the end. The Third Burmese Empire, for a brief time the terror of British India, was crippled and no longer a threat to the eastern frontier. The Konbaung Dynasty itself went through a sharp decline until ultimately all of Burma fell under British control.

The Crawfurd expedition was forced to delay its return to India so that the shallow-draft riverboats cold be repaired. They used the time to gather intelligence on the region, contributing to this map, as well as to collect seven chests of fossils from the riverbank near Magwe, and nearly 18,000 botanical specimens for the Calcutta Botanical Garden. The work led to the discovery of a new species of mastodon, the Stegolophodon. It also provided the first accurate data regarding the interior of Burma, laying the groundwork for further British dominance in the region.

This map was published in 1829 to accompany Journal of an Embassy from the Governor General of India to the Court of Ava by John Crawfurd. It was engraved by John Walker and published in London. It does not appear in all editions of Crawfurd's narrative and there appears to be only one edition.