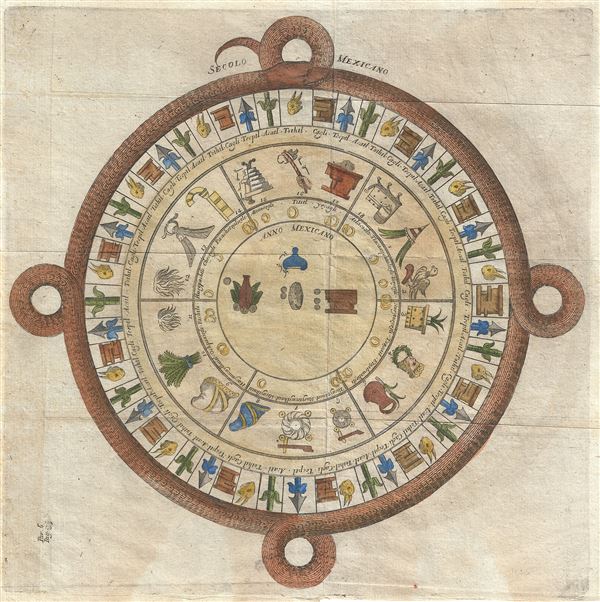 This unusual 1721 chart, drawn by Giovanni Francesco Gemelli Careri, depicts the Aztec calendar wheel, or the Veytia Calendar Wheel. This wheel represents a 52 year cycle and an 18 month annual cycle with symbols of the 18 festivals. The phases of the moon are shown in the inner circle with a serpent moving clockwise. Mariano Fernandez de Echeverria y Veytia, before his death in 1780, copied seven central Mexican calendar wheels for an unfinished work.  He is said to have copied his wheel from several unknown sources. This wheel was acquired by Gemelli in 1697 and first published in 1699. Subsequently, the original has been lost and all subsequent publications are based on Gemelli's depiction.

Giovanni Francesco Gemelli Careri was a Neapolitan lawyer and adventurer who spent several years traveling the world in the 1690s. In Mexico, Gemelli was inspired by pre-Columbian culture and dedicated several chapters of his important book Giro Intorno al Mondo to discussing Aztec history and legends. Though Gemelli's work attained great fame in Europe, by the end of the 18th century it was considered to be mostly fictional. This map was published in the 1721 Italian edition of Gemelli's A Voyage Round the World..