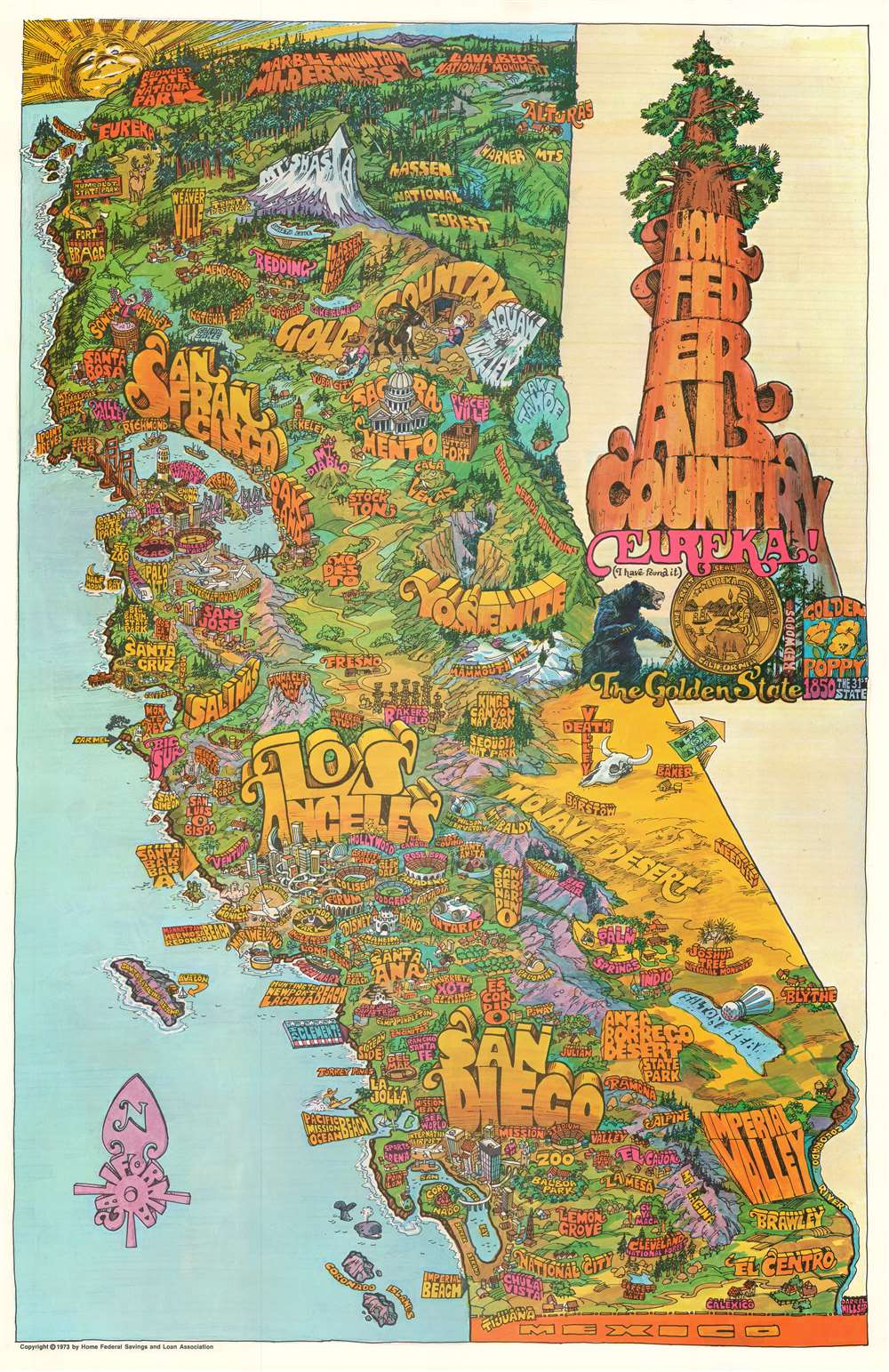 Yosemite to Candlestick Park and everything in between.
$950.00

This is a 1973 Darrel Millsap pictorial map of California. Entertaining and comical, vignettes present California's history and its natural wonders. Miners, complete with long white beards, toil in the mountains near Squaw Valley, one of whom is unsuccessfully fighting with a mule. A man joyfully crushing grapes marks Sonoma Valley, and a skull represents the fate of those unfortunate enough to get lost in Death Valley. Block letters of varying size and color proclaim place names from Lava Beds National Monument to Chula Vista and Tijuana, with the largest identifying San Diego, Los Angeles, San Francisco, and Yosemite. Disneyland, the Rose Bowl, Candlestick Park, the San Diego Zoo, and Balboa Park also make an appearance. The Salton Sea, a salt lake situated on the San Andreas Fault, is marked by a lake and an overturned salt shaker. Created for the Home Federal Savings and Loan Association, the title cartouche proclaims California to be 'Home Federal Country,' which is seemingly cut out of a redwood tree. .

Published in 1973, Millsap borrows some elements for this incredible map of California from the iconic concert posters created for The Fillmore, the legendary San Francisco music venue. The Fillmore posters' psychedelic styling and innovative use of different types of lettering cemented their place in popular culture and modern art history.

This map was created by Darrel Millsap and published by the Home Federal Savings and Loan Association in 1973. An example is part of the David Rumsey Map Collection, and it is rarely seen on the private market. This map is not cataloged in OCLC.

Darrel Wayne 'Bunky' Millsap (May 9, 1931 - April 11, 2012) was an American artist. Born in Ontario, California, Millsap began showing artistic prowess at a young age, drawing portraits and pictures of animals on paper and brown bags he found in his childhood home. He served in the U.S. Navy and was honorably discharged in 1953. After being discharged, he enrolled at the Art Center College of Design in Pasadena, California and graduated in 1956 with a degree in Commercial Illustration. After graduating, Millsap began his career at Fred Kopp Studios in Los Angeles working for Hector Huerta. Only a few years later Millsap moved to San Diego and found work with Frye and Smith. He soon opted to start his own firm with his partner Robert Kinyon called Millsap/Kinyon Illustration. Millsap and Kinyon worked together until Kinyon died of cancer. After Kinyon's death, Millsap worked alone under the name Darrel Millsap Illustration until he retired in 1999. Millsap suffered a stroke a few years before his death and died in 2012 of complications arising from the stroke as well as diabetes and Parkinson's disease. Millsap married his wife Janice in 1959 and they were married for 49.5 years until Janice succumbed to cancer in 2008. They had three children, one of whom died in 1989. Learn More...