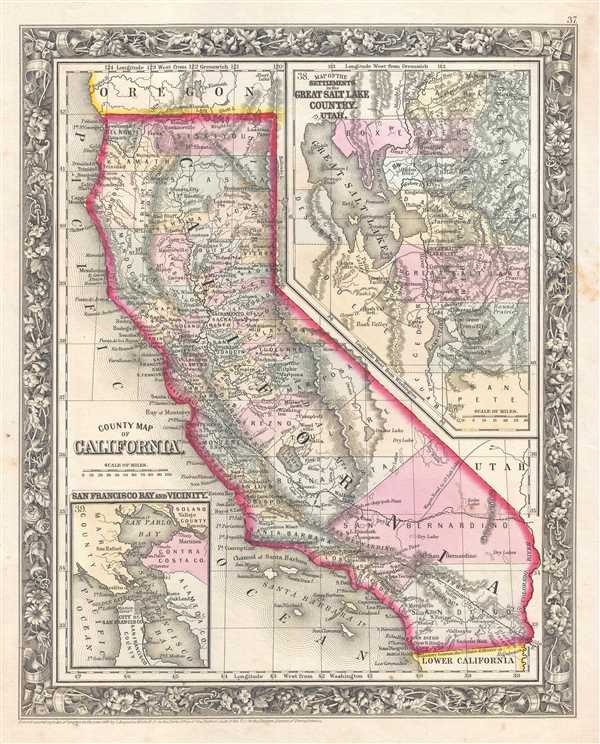 Mitchell's map of California with inset of the Great Salt Lake.

This is an 1861 Samuel Augustus Mitchell, Jr. map of California. The map depicts the region in considerable detail from Oregon to Baja California and from the Pacific Ocean to modern-day Nevada, then part of the Utah Territory. Counties are illustrated and labeled and are shaded different colors to allow for easy differentiation. Cities and towns throughout the state are labeled as well, and both extant and proposed rail lines are illustrated, along with an assortment of additional topographical information. A large inset in the upper right quadrant details the regions surrounding the Great Salt Lake, in Utah. Another inset, in the lower left corner, details San Francisco Bay. The whole is surrounded by the attractive floral border common to Mitchell atlases between 1860 and 1866.

This map was created by S. A. Mitchell Jr. for inclusion in the 1861 issue of Mitchell's New General Atlas. Like many American map publishers of this period, Mitchell did not regularly update his copyrights, consequently this map is dated and copyrighted to 1860: 'Entered according to Act of Congress in the Year 1860 by S. Augustus Mitchell Jr. in the Clerk's Office of the District Court of the U.S. for the Eastern District of Pennsylvania.'