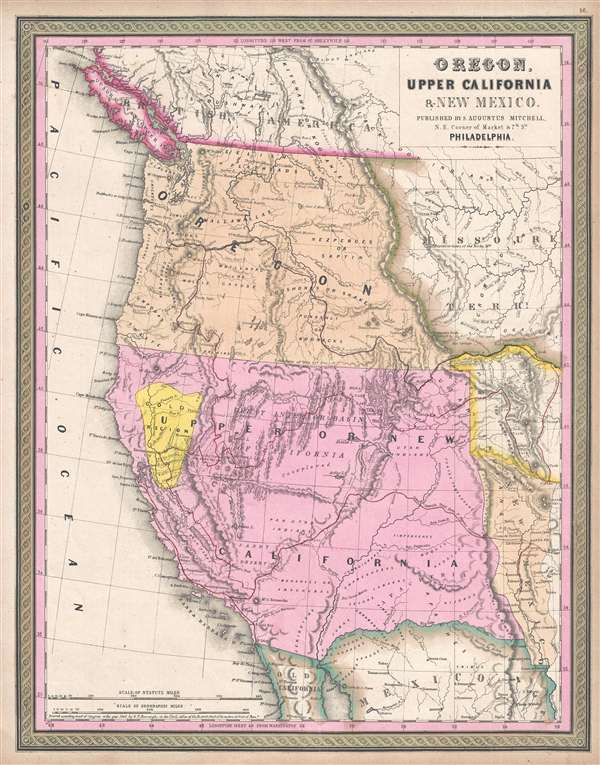 The first specific map of the west to appear in an American Atlas. Also, the only edition of this map to show the California Gold Region.

One of the most important mid-19th century American Atlas maps ever published, this is Samuel Augustus Mitchell's 1849 map of Upper California and Oregon, with a highlighted gold region. The map covers from Vancouver to the Mexico border and from the Pacific to Texas. It follows the borders established by the 1848 Treaty of Guadeloupe Hidalgo which formally ended the Mexican American War and ceded Upper California to the United States. It was first issued in 1846 and went through several states, this being the 2nd, and because of the addition of the California Gold Region, and Fremont's cartography, the most desirable.

The California Gold region is highlighted in bright yellow and here appears as such for the first time. Mitchell reworked the plate for this map late in 1849, the first major reworking since the original H.N. Burroughs engraving of 1845. The highlighted California Gold Region exists in only one plate, but appears in two editions of the atlas, late-1849 and early-1850. Late in 1850 the plate was reworked once again, under Cowperthwait, with a more sophisticated mapping of Nevada region, Utah and New Mexico deliniated, and outline and coloring around the gold region removed. The highlighting of Fremont's route was also removed in this late-1850 edition.

Also of significance is the highlighting of routes explored by the Fremont Expedition and the Great Spanish Trail. Although these exploratory routes appear on later editions of the map, it is only in this edition, issued just after Preuss' official map of the expedition, that they are so intensely highlighted. The map adds a wealth of detail from the Fremont Expeditions, particularly in the Great Basin, between Great Salt Lake and the Sierra Nevada Range, where Lake Carson and Walkers Lake appear for the first time. The cartographer has also added hills along Fremont River, and sketched in the course of the Humboldt River.